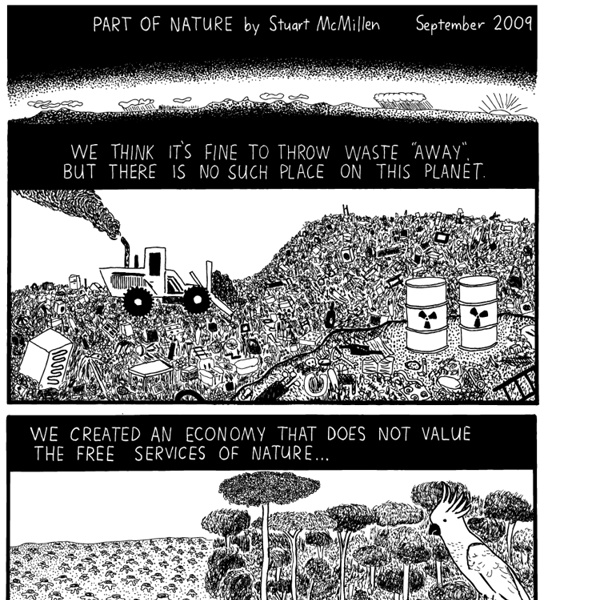 This cartoon is heavily influenced by the books Natural Capitalism - Paul Hawken, Amory Lovins and Hunter Lovins (1999) and Mid-Course Correction - Ray Anderson (1998). It is also in the same vein as the flash animation "The Story of Stuff" by Annie Leonard, which I watched when I was about 90% of the way through the drawing process. Back to post / website.

Rainforest conservation in action with the World Land Trust, international wildlife conservation organisation World Land Trust Tesla - Master of Lightning: A Weapon to End War Tesla inherited from his father a deep hatred of war. Throughout his life, he sought a technological way to end warfare. He thought that war could be converted into, "a mere spectacle of machines." In 1931 Tesla announced to reporters at a press conference that he was on the verge of discovering an entirely new source of energy. War clouds were again darkening Europe. The idea generated considerable interest and controversy. By 1937 it was clear that war would soon break out in Europe. What set Tesla's proposal apart from the usual run of fantasy "death rays" was a unique vacuum chamber with one end open to the atmosphere. Of all the countries to receive Tesla's proposal, the greatest interest came from the Soviet Union. Tesla hoped that his invention would be used for purely defensive purposes, and thus would become an anti-war machine. Tesla also contemplated peacetime applications for his particle beam, one being to transmit power without wires over long distances.

Mamas, Don't Let the New Atheism Grow Up to Be the Same Old Shit in a Different Package Damon Linker recently wrote a piece for The New Republic about what he calls "the new atheism" (as represented by Dawkins, Dennett, Harris, and Hitchens) and its potential to undermine the very principles (progressive liberalism and secular politics, particularly) it asserts to advocate. Now, there are problems with the article; it simplifies atheism so it can be neatly divided into two strands, and it ignores altogether that strident anti-religiosity is not unique to atheists. It also falls into the trap, right from the title ("Atheism's Wrong Turn"), that so many articles on religion have—treating atheists as a monolithic group. But, despite those caveats, and some other quibbles, it made a fair point about movement atheism's capacity to subvert its purported objectives with regard to a secular public sphere, if it begins to actively pursue an injection of atheism as a religious replacement, as opposed to merely removing public references to theist beliefs.

Does Self-Awareness Require a Complex Brain? | Brainwaves (Image by David R. Ingham, via Wikimedia Commons) The computer, smartphone or other electronic device on which you are reading this article has a rudimentary brain—kind of.* It has highly organized electrical circuits that store information and behave in specific, predictable ways, just like the interconnected cells in your brain. On the most fundamental level, electrical circuits and neurons are made of the same stuff—atoms and their constituent elementary particles—but whereas the human brain is conscious, manmade gadgets do not know they exist. Humans are more than just conscious—they are also self-aware. Numerous neuroimaging studies have suggested that thinking about ourselves, recognizing images of ourselves and reflecting on our thoughts and feelings—that is, different forms self-awareness—all involve the cerebral cortex, the outermost, intricately wrinkled part of the brain. Philippi and Rudrauf also showed Roger photographs of himself, of people he knew and of strangers.

Video Showing the Huge Gap Between Super Rich and Everyone Else Goes Viral For much of the past decade, policymakers and analysts have decried America's incredibly low savings rate, noting that U.S. households save a fraction of the money of the rest of the world. Citing a myriad of causes -- from cheap credit to exploitative bank practices -- they've noted that the average family puts away less than 4 percent of its income. "Wealth Inequality in America," a six-minute video produced by a YouTube user named "Politizane," casts an interesting angle on the plummeting savings rate. Set to depressing piano music and packed with crystal-clear animations, it gives a powerful snapshot of the American economic landscape. It isn't hard to see why there is such a yawning gap between the richest Americans and the rest of us. But the distribution of this huge economic bonanza has been startlingly uneven. 9 Ways Sequestration Will Affect You 1. Share Facebook Twitter Google+ Email Pinterest

DIY - A handbook for changing our world ENOUGH, ANTI-CONSUMERISM CAMPAIGN Republicans Want To Slash Government Spending, Can’t Name Anything To Cut (VIDEO The March 22, 2013 Real Time with Bill Maher made a powerful point: self-identified Republicans, including those who call themselves Tea Party, are IMPERATIVELY certain that the answer to America’s woes is to slash government spending. But when you ask them to name specific cuts, they pretty much come up with bupkus. This is what happens when people are insulated in the Fox echo chamber. They have had “must cut government spending” as a mantra, repeated hundreds of times a day, and they’ve bought in. But none of these people have any real idea about what to cut, other than “wasteful government spending”. What do Americans Mean by “Wasteful Government Spending”? The Huffington Post reported a few days ago on a poll asking Americans to explain in their own words what they mean by the phrase “wasteful government spending.” Where Can We Actually Cut Spending? Just looking at the discretionary spending it breaks down like this: So what the heck is “mandatory spending”? How Do We Foot The Bill?

Global Issues : social, political, economic and environmental issues that affect us all The Logic of Stupid Poor People We hates us some poor people. First, they insist on being poor when it is so easy to not be poor. They do things like buy expensive designer belts and $2500 luxury handbags. To be fair, this isn’t about Eroll Louis. His is a belief held by many people, including lots of black people, poor people, formerly poor people, etc. It is, I suspect, an honest expression of incredulity. One thing I’ve learned is that one person’s illogical belief is another person’s survival skill. My family is a classic black American migration family. We had a little of that kind of rural black wealth so we were often in a position to help folks less fortunate. I remember my mother taking a next door neighbor down to the social service agency. I internalized that lesson and I think it has worked out for me, if unevenly. I do not know how much my mother spent on her camel colored cape or knee-high boots but I know that whatever she paid it returned in hard-to-measure dividends. Like this: Like Loading...

Volunteer Opportunities We could not do our work without the wonderful volunteers who have given their time over the years! Volunteers work in our San Francisco office, with program staff, on a less formal basis, and are generally able to offer a shorter amount of time than interns. Volunteers can get involved with the organization in any capacity. Tasks may range from staffing information tables at events, phone banking our members about important issues, assisting with the development and distribution of campaign/program materials, or researching and writing reports. Some volunteers make short-term agreements with the organization to assist staff, while others volunteer 1-2 hours per week over a longer period of time Please e-mail volunteers@globalexchange.org to inquire about volunteer opportunities.

Jon Stewart rips Dick Cheney a new one On the latest Daily Show, Jon Stewart blasted Dick Cheney's criticism of President Obama's negotiations with Iran. Calling the former vice president "a man rotten to his very core, which is in itself a tiny black hole from which no joy or light can escape" and "the jagged-toothed forest demon who steals our children," Stewart went on to say that "now and then he [Cheney] slithers out from his lair inside a mountain of kitten corpses and goes on TV or radio saying awful things. Usually we ignore it … but sometimes, we just can't." Jon Stewart then obliterates Cheney's radio remarks with a little detective work—and a history lesson. Here are some highlights: But basically the vice president’s point appears to be this: anyone who strengthens the strategic position of Iran is by definition working to weaken the Unites States of America. You, sir, were arguing for the United States to lift sanctions on Iran so your company Halliburton could get contracts with this radical regime!

Home - Neighborhood Progress Inc. Ohio Renewable Energy Laws Attacked - Energy and Policy Institute In 2014, the Ohio State Legislature passed a bill freezing the state’s renewable energy standard (RES). The bill also required an “Energy Mandates Study Committee” (EMSC) to produce a report with recommendations on policy changes regarding the RES. The study committee is scheduled to produce a report by September 30, 2015, as required by law. The sponsor of the bill, Senator Troy Balderson, also co-chairs the study committee and is an active member of the American Legislative Exchange Council (ALEC), according to a 2011 report. His co-chair, Representative Kristina Roegner, is also a member of ALEC. In fact, there are at least eight of the 13 members of the EMSC connected to ALEC: • Representative Ron Amstutz • Senator Troy Balderson • Representative Christina Hagan • Senator Bob Peterson • Representative Kristina Roegner • Senator Bill Seitz (also previously an ALEC Board Member) • Representative Michael Stinziano • Senator Cliff Hite