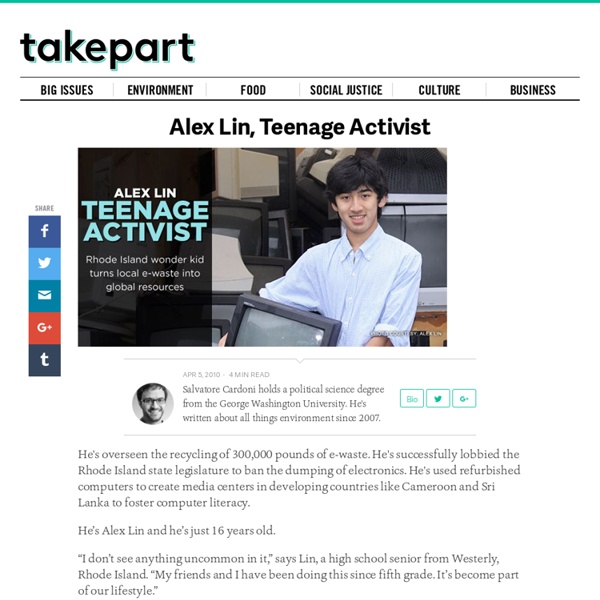 He's overseen the recycling of 300,000 pounds of e-waste. He's successfully lobbied the Rhode Island state legislature to ban the dumping of electronics. He's used refurbished computers to create media centers in developing countries like Cameroon and Sri Lanka to foster computer literacy. He’s Alex Lin and he’s just 16 years old. “I don’t see anything uncommon in it,” says Lin, a high school senior from Westerly, Rhode Island. Lin’s catalytic moment came in 2004 when he chanced upon a Wall Street Journal article. E-waste, or electronics garbage, is the fastest growing section of the U.S. trash stream. While there is no federal law banning e-waste, 20 states have passed legislation mandating statewide e-waste recycling. If only the states with e-waste laws in their 2010 legislative pipeline—Kentucky, Massachusetts, Nebraska, and Utah, to name a few—had an Alex Lin at their disposal. Alex Lin, third from right, has taken e-waste matters into his own hands. Reduce, reuse, and recycle.

Alex Lin - Turning E-Waste Into E-Treasure Alex Lin was a boy who was just reading the newspaper one day. He read an article about something called e-waste. He learned that it is the waste generated as people upgrade electronic devices. When people are done with things like computers, phones, mp3 players, etc. and throw them away, that’s e-waste. He also learned that e-waste is dangerous to the environment. To help stop e-waste, Alex got help from his community service group, the Westerly Innovations Network (WIN). Additional Resources: Here is an article about Alex and his efforts.Here is an interview with Alex.Click here for more InspireMyKids stories about the environment.Find great books in our store, like Acting for Nature, about how children can help the environment.This video is about recycling e-waste. Topics for Discussion: Think about all the electronics families have. Take Action: Talk to family and friends about the danger of e-waste and tell them to recycle their old electronics! Teacher Features:

Polar Bears and Climate Change Floods. Droughts. Heat waves. Massive storms. In fact, if our chief scientist, Dr. "Events like these will continue to increase in number and severity as the world continues to warm." What's causing climate change? What's causing climate change? Greenhouse gases (GHGs) in the atmosphere act like a blanket that keeps the earth warm. Other factors such as deforestation have added to the problem. Do scientists agree about climate change? The laws of physics dictate that the world will grow warmer and warmer as greenhouse gas concentrations rise. Are scientists still debating climate change? The important point to remember is that natural fluctuations in the climate system will continue with global warming, but the baseline will climb higher and higher. And once we cross those thresholds, it will be bad news not only for polar bears—but countless other species, including humans. How are polar bears affected by climate change? What can be done? Humans have caused this problem, humans can fix it.

What Kids Can Do The Clock Is Ticking: Youth and Environmental Activism by Joi Officer, 15, Laura Cockman, 17, and Rebekah Taft, 17 of Y-Press Young people have a unique relationship with the environment: They are often the first affected when something goes wrong, yet the least represented when decisions are made. They, more than any other generation, have been raised to feel a responsibility toward the environment. And that’s important because they will be the first generation in charge of correcting the problems caused by the widespread pollution of the atmosphere and rampant misappropriation of natural resources. Youth today feel the “clock is ticking in terms of the amount of time we have to deal with the major issues like clean air, clean water and global warming,” says Sharon Smith, program director of Brower New Leaders at the Earth Island Institute, a support group for youth environmental campaigns and initiatives. Growth in activism Smith has seen firsthand the growth in environmental activism.

Teenage girl is dogs best friend | NZNews While most teenage girls are busy doing their nails and downloading the latest music, Faye Carey is helping re-home dozens of abandoned dogs. The 16-year-old Waikato teen volunteers with her local branch of Animal Control, giving abandoned animals a second chance at life. She has set up a Facebook page, Animal Re-home Waikato, where she advertises puppies and dogs who need adopting. It all started when Faye underwent a week of work experience at Animal Control last November. "We picked up a puppy in the pound the first day I went to Animal Control and then on my last day he was still there and I felt really sorry for him," she says. "So I advertised him on TradeMe and he got a lot of interest and he went to a lovely home in Auckland." The idea for the Facebook page came when Faye was trying to re-home a litter of abandoned kittens, and needed a free way to advertise. The page has nearly 300 likes and a loyal following of satisfied new parents. "I'd love to have a career in Animal Control.

ARKive - Discover the world's most endangered species Wildscreen's Arkive project was launched in 2003 and grew to become the world's biggest encyclopaedia of life on Earth. With the help of over 7,000 of the world’s best wildlife filmmakers and photographers, conservationists and scientists, Arkive.org featured multi-media fact-files for more than 16,000 endangered species. Freely accessible to everyone, over half a million people every month, from over 200 countries, used Arkive to learn and discover the wonders of the natural world. Since 2013 Wildscreen was unable to raise sufficient funds from trusts, foundations, corporates and individual donors to support the year-round costs of keeping Arkive online. As a small conservation charity, Wildscreen eventually reached the point where it could no longer financially sustain the ongoing costs of keeping Arkive free and online or invest in its much needed development. Therefore, a very hard decision was made to take the www.arkive.org website offline in February 2019.

American Pika Genus: Ochotona Species: princeps For years, the polar bear has been the symbol of the global warming movement. But today, the American pika has good grounds to compete with the polar bear for this unwanted honor. American pikas are suffering because global warming has brought higher temperatures to their western mountain homes. Pikas live in high mountain ecosystems that are cool and moist. Unlike other mountain species that can move to higher altitudes in warming climates, pikas live so high on the mountain that there is no where for them to go. Learn more about global warming's impact on the pika >> Description American pikas are small, rodent-like mammals. Pikas have brown and black fur. Size: Pikas are about 7-8 inches long. Diet: Pikas are herbivores. Pikas like to be prepared! Typical Lifespan: American pikas can live around 6-7 years. Habitat American pikas are found in alpine terrain, above the tree line, on mountains. How Pikas Communicate Life History and Reproduction Read more >>

Kids leading the charge to green Last week, at the 2010 U.S. Social Forum, 20,000 activists met in Detroit, Mich., to network and share their visions for social change. There were attendees and presenters who spanned all age groups, but many folks were struck by just how many young people came out to pursue environmental and social justice issues. Everywhere you turn, there is a great story about a teen leading her family, school or community towards environmental and social awareness. Take for example, 18-year-old Tiffany Ng of the Common Roots Program of the Chinese Progressive Association of San Francisco (CPAS). Another 18-year-old, Ingried Seyundo, a teen activist with People Organizing to Demand Environmental and Economic Rights (PODER) works to prevent big corporations from taking advantage and polluting in predominately minority and low-income neighborhoods. And this type of teen activism is certainly not limited to those attending the Detroit Forum.