The Likely Cause of Addiction Has Been Discovered, and It Is Not What You Think 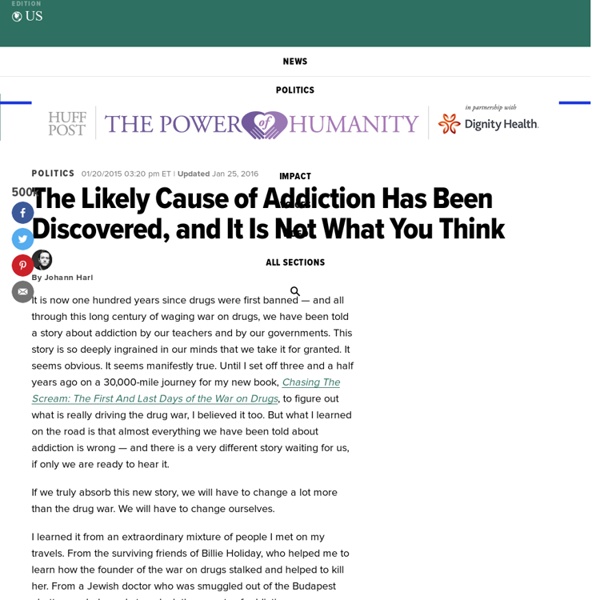 It is now one hundred years since drugs were first banned — and all through this long century of waging war on drugs, we have been told a story about addiction by our teachers and by our governments. This story is so deeply ingrained in our minds that we take it for granted. It seems obvious. It seems manifestly true. Until I set off three and a half years ago on a 30,000-mile journey for my new book, Chasing The Scream: The First And Last Days of the War on Drugs, to figure out what is really driving the drug war, I believed it too. But what I learned on the road is that almost everything we have been told about addiction is wrong — and there is a very different story waiting for us, if only we are ready to hear it. If we truly absorb this new story, we will have to change a lot more than the drug war. I learned it from an extraordinary mixture of people I met on my travels. I had a quite personal reason to set out for these answers. When I first learned about this, I was puzzled.

Childhood Guilt, Adult Depression? Health New research shows differences in the brains of kids who show excessive guilty behavior, which may put them at risk for a host of mood disorders later in life. Please consider disabling it for our site, or supporting our work in one of these ways Spicy Food Is Associated With A Lower Risk Of Death Good news for chili chompers: Regularly chowing down on spicy foods is associated with a lower risk of death, especially if you stay away from booze. But before you start drowning your cheerios in tabasco sauce, it’s unclear at this stage whether it is the spicy food itself or some other factor that is potentially bestowing the observed benefits. Regardless, further research is warranted, and the findings add to a growing body of evidence that chili could be healthful. The study has been published in The BMJ. The world seems to have an ongoing obsession with unlocking the secrets to longevity.

The Rise of ‘Mama’ Elissa Strauss | Longreads | May 2015 | 15 minutes (4,006 words) I first noticed “mama” while pregnant with my son in 2012. I was browsing on the internet—familiarizing myself the different types of mothers out there, trying to figure out what kind of mother I might become—when I noticed a number of alternative moms who referred to themselves as “mama.” This was the radical homemaking, attachment parenting, extended breastfeeding bunch, and “mama” was right at home with their folksy, back-the-earth approach to motherhood. This use of mama can be traced back to women like Ariel Gore, who began publishing her alternative parenting magazine “Hip Mama” in 1993. Inspired by her experience as an urban single mom, the magazine became the source of parenting advice for riot grrrl types, tattooed and pierced women who wanted to find a way to embrace parenthood while simultaneously rejecting much of the bourgeois accouterment that comes along with it.

Ireland set to have 1st openly gay prime minister Ireland's governing Fine Gael party has elected Leo Varadkar, the gay son of an Indian immigrant, as its new leader and the country's likely next prime minister. Varadkar defeated rival Simon Coveney in a contest to replace Enda Kenny, who resigned last month. Coveney won the votes of a majority of party members, but Varadkar was backed by most lawmakers and local representatives to give him victory Friday under the centre-right party's electoral college system.

Poll Proves Trump’s Supporters Really ARE Racist, Uneducated, Hateful Buffoons « It’s easy to watch Donald Trump’s supporters beat up a black man for asserting that his life has value while calling their victim a “monkey” and a “n*gger,” or drag and kick a Latino protester, or beat a homeless Hispanic man with a metal pipe and urinate on him (Trump said these men were “passionate” and “love this country and want this country to be great again), or scream “white power” at a rally, and think “these people are just a teensy bit racist.” It’s no secret that The Donald is quite popular with white supremacists and racists of all stripes. After all, he’s the guy who wants to build a big, beautiful wall to keep brown people out of the country and give Muslims big, beautiful special badges like Hitler made the Jews wear during their time in fellow Republicans’ big, beautiful concentration camps. And Trump revels in their love. Support for Trump as the Republican nominee among various subgroups of Republican voters is higher than average.

Most Confidential Crisis Lines Covertly Trace Calls, Send Police Most crisis lines across the US trace calls and send police to people’s homes if crisis line staff feel someone might be at risk of suicide, according to an article in Suicide and Life-Threatening Behavior, the official journal of the American Association of Suicidology. A new policy developed in 2012 has clarified and more firmly entrenched this longstanding practice, stated the article. Even two Samaritans call centers which historically had resisted the policy have now implemented the covert practice. The authors of the article included two directors of the Substance Abuse and Mental Health Services Administration-funded National Suicide Prevention Lifeline. The Lifeline network is comprised of over 160 crisis call centers across the US that are linked through a variety of toll-free numbers through which callers are then routed to their nearest crisis center. The authors acknowledged that the practice is controversial.

Science says dancing with friends is good for your health You might not think of yourself as a dancer. In fact, maybe even the idea of dancing makes your palms sweat. But growing scientific evidence suggests that getting up and grooving with others has a lot of benefits. Neoliberalism is creating loneliness. That’s what’s wrenching society apart What greater indictment of a system could there be than an epidemic of mental illness? Yet plagues of anxiety, stress, depression, social phobia, eating disorders, self-harm and loneliness now strike people down all over the world. The latest, catastrophic figures for children’s mental health in England reflect a global crisis.

Average wedding cost: published numbers on the price of a wedding are totally inaccurate Courtesy of Crowne Plaza Hollywood Beach Hotel/Flickr Weddings are expensive. There’s no way around it. Suicides Rise Dramatically with Increasing Psychiatric Care As the amount of involvement that people have with psychiatric professionals and psychiatric care increases, the likelihood that they will commit suicide rises steadily and dramatically, according to a study in Social Psychiatry and Psychiatric Epidemiology. Taking psychiatric medications makes people nearly 6 times more likely to kill themselves, while having spent time in the previous year in a psychiatric hospital makes them over 44 times more likely to kill themselves. The findings suggested that clinical tools for assessing suicide risk are not working well, stated the Danish authors of the broad-based study of the Denmark population. However, an accompanying editorial suggested the findings more likely showed that “psychiatric care might, at least in part, cause suicide.” The researchers did a nationwide, nested case-control study comparing individuals who died from suicide to matched controls between the years 1996 and 2009.