Video: NYPD Attacks and Arrests Man for Filming a Cop Pawing a Woman. Noam Chomsky. Homeland Security was built to fend off terrorists. Why's it so busy arming cops to fight average Americans? For three weeks and counting, America has raged against the appalling behavior of the local police in Ferguson, Missouri, and for good reason: automatic rifles pointed at protesters, tank-like armored trucks blocking marches, the teargassing and arresting of reporters, tactics unfit even for war zones – it was all enough to make you wonder whether this was America at all. 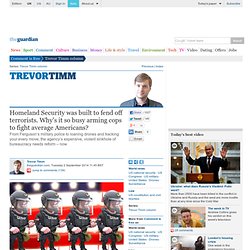 But as Congress returns to Washington this week, the ire of a nation should also be focused on the federal government agency that has enabled so much of the rise of military police, and so much more: the Department of Homeland Security (DHS). The 240,000-employee, Bush-invented bureaucratic behemoth that didn’t even exist 15 years ago has been the primary arms dealer for out-of-control local cops in Ferguson and beyond, handing out tens of billions of dollars in grants for military equipment in the last decade with little to no oversight and even less training on how use it.

Snowden. Khadr. Canada. Native Rights. Privacy. Environment. War. Noam Chomsky. Chomsky.info : The Official Noam Chomsky Website. There’s a Noam Chomsky Graphic Novel in the Works and it Looks Amazing. An artist and a PhD candidate are currently attempting to fund and create a graphic novel based on an interview with famed anarchist Noam Chomsky. llustrator Luke Radl and writer Jeffrey Wilson are working on the project, to be released by AK Press. 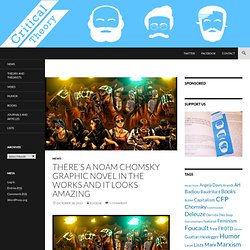 A graphic novel about a dude talking sounds kind of boring, but Radl and Jeffrey plan on making it interesting by injecting illustrate scenes of the many historical events Chomsky peppers into his arguments. Their Indiegogo explains: The graphic novel is based off an interview Jeffrey conducted with Noam Chomsky in the summer of 2012. Chomsky is well know for being generous with his time and granting numerous interviews over the years. Despite the volumes of Chomsky related material available, few publications have researched and elaborated on the many references and examples that Chomsky employs. 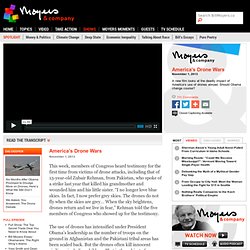 “The Disposition Matrix” sounds like the title of a suspense thriller. But that’s what America's counterterrorism experts call their database, the list of those our government believes are preparing to do America harm. From it, targets are chosen for assassination. However, the drones they use are not always so selective, and often kill innocent civilians, including children. Last Tuesday, for the first time, drone attack victims testified at a briefing for members of Congress. The briefing coincided with the release of a new documentary, “Unmanned: America’s Drone Wars,” the latest from Brave New Films, produced and directed by Robert Greenwald. BRANDON BRYANT in Unmanned: Getting into the drone program was weird. And depending on atmospherics, if it was a completely clear day, you’d definitely get a good picture. BILL MOYERS: One of those featured in the film is Tariq Aziz, 16 years old.

KHUN MARJAN KHAN in Unmanned: I raise my voice to take a stand. DR. Binding Chaos. Vs Elitism, Celebrity and Oligarchy This article is part of a series: ‘Stigmergy: Systems of Mass Collaboration’. 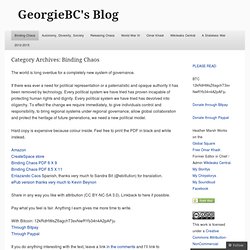 Note: Concentric circles relate to sound amplification – the voices or ideas in the centre are amplified more greatly. They are not hierarchical as they have no direct control over the actions of anyone. While most action based systems can be completely open to participation by anyone, there are situations where an elite level of knowledge and accreditation of some sort is necessary prior to participation.

Complicated surgery or engineering are examples of this type of work. Idea based systems such as some scientific research, which should be open to all contributions, require extensive feedback and peer review of ideas, both to identify signal from noise and to provide knowledge bridges between elite levels of knowledge and casual users. In allowing this form of elitism, ultimate choice must always be left with the entire user group.