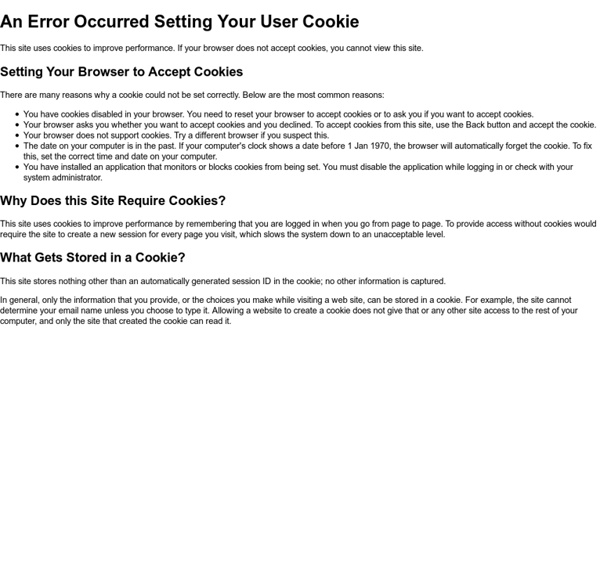 This site uses cookies to improve performance. If your browser does not accept cookies, you cannot view this site. Setting Your Browser to Accept Cookies There are many reasons why a cookie could not be set correctly. You have cookies disabled in your browser. Why Does this Site Require Cookies? This site uses cookies to improve performance by remembering that you are logged in when you go from page to page. What Gets Stored in a Cookie? This site stores nothing other than an automatically generated session ID in the cookie; no other information is captured. In general, only the information that you provide, or the choices you make while visiting a web site, can be stored in a cookie. Related:  Wolf Activism

Study: Alberta wolf cull stabilizes caribou numbers, but only buying time | CTV News EDMONTON -- New research shows that killing hundreds of wolves has barely managed to stabilize the numbers of a threatened Alberta caribou herd in a region increasingly impacted by industry. The study, conducted by some of the province's top caribou scientists and published online late last week, suggests that Albertans face a stark choice as their government prepares legally required plans to restore the herds. "One hopes that it's not just some window dressing that's going on," said Stan Boutin, a University of Alberta biologist and one of the co-authors. "If ... the plan is one that tries to satisfy all the players in the game, it becomes a thing where each of the players at the table are in there primarily to ensure they don't lose too much, as opposed to the overall objective. In an attempt to keep caribou from disappearing, Alberta began an annual cull of about 45 per cent of the wolves on that range in 2005. The study compares caribou numbers before and after the cull.

Evolution: Education and Outreach - Free Access Available As of January 2013 Evolution: Education & Outreach is a peer-reviewed open access journal published under the brand SpringerOpen. From 2013 onward all new articles published in the journal are freely and permanently available online for anyone, anywhere and at any time. This journal promotes accurate understanding and comprehensive teaching of evolutionary theory for a wide audience. Evolution: Education and Outreach addresses the question of why we should care about evolution by exploring the practical applications of evolutionary principles in daily life and the impact of evolutionary theory on culture and society throughout history. Targeting K-16 students, teachers and scientists alike, the journal presents articles to aid members of these communities in the teaching of evolutionary theory. It connects teachers with scientists by adapting cutting-edge, peer reviewed articles for classroom use on varied instructional levels.

NEPC 2015: Dung Beetles - NEPC Grazing Guide Northeast Pasture Research and Extension Consortium Waterfront Place Conference Center, Morgantown, WV March 11-12, 2015 Download this session as PDF On Thursday, March 12, the last technical session, Dung Beetles - Their usefulness in the pasture ecosystem and what affects their populations, began at 8:00 AM. Dr. Thomas Griggs, Assistant Professor of Forage and Grassland Agronomy, West Virginia University, Morgantown was session moderator. Dr. Problem parasites in livestock, such as Haemonchus contortus, Haemonchus placei, Ostertagia ostertagi, Cooperia spp., Trichostrongylus spp., and Oesophagostomum species, caused a need for cattle, sheep, and goats to be treated with parasiticides. Once on the pasture surface, they hatch and crawl onto grass leaves. Three classes of drugs are approved for use in cattle: 1.) Include: Cydectin, Eprinex, Dectomax, Ivomec 2.) Include: Valbazen, Safe-Guard, Panacur, Synanthic 3.) Include: Levamisole, Tramisole There are 3 principal reasons: 1.) 2.) 3.) Dr.

Yellowstone wolf pack encircles two photographers . . . . ."wild and beautiful" Paradise Valley wildlife photographer Alan Sachanowski has written a very interesting and timely story about a recent experience he and another photographer had in Hayden Valley close up with the Gibbon wolf pack . . . Ralph Maughan ————————– By Alan Sachanowski.I have read with interest stories recently about individuals who have felt threatened by wolves in the back country. Forest Service employees being evacuated from a wilderness area because of a perceived threat, an armed bow hunter claiming to have been trapped in his tent for hours, and of course the hunter who inadvertently shot his guide a couple years ago in Paradise Valley Montana, because he mistook him for wolves that were “coming to get him”. The list of stories goes on. I thought that, perhaps, your readers might be interested in reading another “close encounter” type story. Copyright Alan Sacharnowski

Evolver Zone Report finds flaws in red wolf restoration effort RALEIGH, N.C. An independent review released Thursday found flaws in a 27-year program to restore the endangered red wolf, including the size of the habitat, inadequate understanding of population trends and poor coordination with local program managers. The review by the nonprofit Wildlife Management Institute was commissioned by federal wildlife officials as they consider whether to continue maintaining the world's only wild red wolf population in eastern North Carolina. A decision on how to proceed is expected in early 2015, and officials are also considering nearly 48,000 comments submitted during a period for the public to weigh in. Once common in the Southeast, the red wolf had been considered extinct in the wild as of 1980 due to factors including hunting and loss of habitat. The new 171-page report said the U.S. "There is no theoretical or practical reason to believe that red wolves will constrain their activities or movements to a jurisdictional boundary," the report said.

Abstract search | Walcott 2009 WODCW FAQ Sheet on Wolf Hound Hunting | Wolves of Douglas County Wisconsin By Wolves of Douglas County Wisconsin (WODCW) A Grassroots Organization started to remove the dogs from the wolf hunt. 1. Out of all the states that hunt wolves, only Wisconsin allows hound hunters to use unleashed packs of dogs to hunt wolves. Wisconsin, quite literally, throws “dogs to the wolves.” 2. Hound hunters traditionally train their dogs to focus on specific prey by releasing their dogs to surround, attack and terrorize a prey animal (e.g. a bear cub or fox) for hours on end (up to 16 hours/day) enclosed in a small, open barrel or “roll cage.” 3. 4. 5. *These may not be reproduced or edited without permission from wolves of Douglas County Wisconsin. (Image is of hound Hunting dogs attacking a coyote) For how to get involved: Email: wolvesdouglasco@gmail.com Facebook: Blog: wolvesofdouglascountywisconsin.com Like this: Like Loading...

Wolfram|Alpha: Computational Knowledge Engine 1827 Dead Wolves -Northern Rockies/Great Lakes 2013/early 2014 My previous post dealt with the ongoing number of wolves killed in 2014. This post deals with total 2013/early 2014 wolf mortality in the Northern Rockies/Great Lakes. It’s a huge number! From Wildearth Guardians: Livestock Losses Cattle Myth: Wolves, coyotes, mountain lions, bears, and others kill lots of cattle. Truth: Less than a quarter of one percent, 0.23%, of the American cattle inventory was lost to native carnivores and dogs in 2010, according to a Department of Agriculture report. The government’s own data show that the real killers of cattle are not a few endangered wolves or other wildlife – it’s illness and weather. The livestock predation myth is a big lie imposed on the American public. Read the full report here Wolves are being wiped out in record numbers, driven by a hate filled anti-wolf movement . No wolf is safe in America. Northern Rockies: 2013 Wolf mortality Northern Rocky Mountain Wolf Recovery Program 2013 Interagency Annual Report Idaho – 335 wolves Oregon – 3 wolves

Timeline: The evolution of life - life - 14 July 2009 Read full article Continue reading page |1|2|3|4 There are all sorts of ways to reconstruct the history of life on Earth. Pinning down when specific events occurred is often tricky, though. For this, biologists depend mainly on dating the rocks in which fossils are found, and by looking at the "molecular clocks" in the DNA of living organisms. There are problems with each of these methods. Modern genetics allows scientists to measure how different species are from each other at a molecular level, and thus to estimate how much time has passed since a single lineage split into different species. These difficulties mean that the dates in the timeline should be taken as approximate. 3.8 billion years ago? This is our current "best guess" for the beginning of life on Earth. , and was probably based on RNA rather than DNA. At some point far back in time, a common ancestor gave rise to two main groups of life: bacteria and archaea. 3.5 billion years ago 3.46 billion years ago 3.4 billion years ago