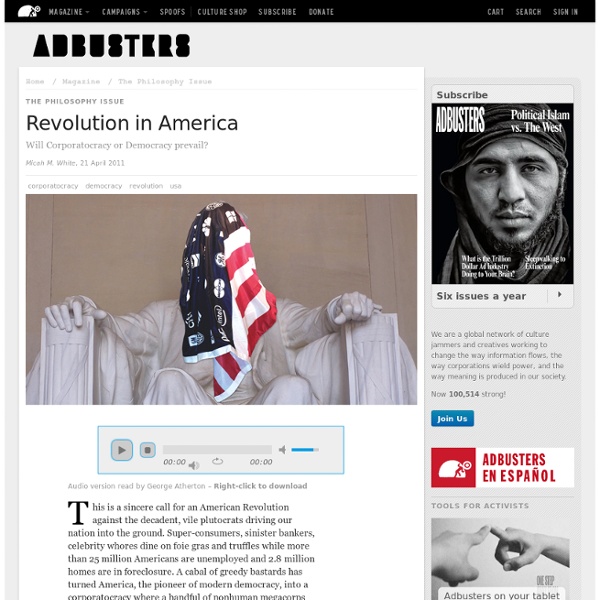 : freegan.info David Graeber “The funny thing is,” my Egyptian friend told me, “you’ve been doing this so long, you kind of forget that you can win. All these years, we’ve been organizing marches, rallies … And if only 45 people show up, you’re depressed. If you get 300, you’re happy. Then one day, you get 500,000. And you’re incredulous: on some level, you’d given up thinking that could even happen.” Mubarak’s Egypt was one of the most repressive societies on Earth – the entire apparatus of state was effectively organized around ensuring that what ended up happening could never happen. So why not here? To be honest, most activists I know do go around feeling much like my Egyptian friend used to feel – we organize much of our lives around the possibility of something that we’re not sure we believe could ever really happen. Will they? Military regimes like Egypt live on fear. There is only one known way to do that, and that is for people to experience it.

Relax, Everything Is OK Relax, Everything Is OK Posted on Nov 12, 2011 The 20th-century French novelist and philosopher Albert Camus once wrote: “At any street corner the feeling of absurdity can strike any man in the face.” For the unfortunate few deprived of the experience, a few megaphone-wielding British agitators took to the streets of London to make things clear. “Everything you read in the mainstream media is 100 percent true,” “Please, go back to your jobs. If you have not got a job you are a worthless human being” and “Consume, consume, consume until we have no planet left to consume” are the first words out of the mouth of a man determined to expose the insanity of his increasingly commercialized society. BackBurnerNews: New and Improved Comments If you have trouble leaving a comment, review this help page.

Video Showing the Huge Gap Between Super Rich and Everyone Else Goes Viral For much of the past decade, policymakers and analysts have decried America's incredibly low savings rate, noting that U.S. households save a fraction of the money of the rest of the world. Citing a myriad of causes -- from cheap credit to exploitative bank practices -- they've noted that the average family puts away less than 4 percent of its income. "Wealth Inequality in America," a six-minute video produced by a YouTube user named "Politizane," casts an interesting angle on the plummeting savings rate. It isn't hard to see why there is such a yawning gap between the richest Americans and the rest of us. But the distribution of this huge economic bonanza has been startlingly uneven. In terms of information, Politizane's video isn't offering anything new: Its analysis of American perceptions of wealth distribution, the line between rich and poor and the issue of America's wealth continuum echo stories that have been in the media for years. 9 Ways Sequestration Will Affect You 1. Share

6 Things You Won't Believe Animals Do Just Like Us Being a human is a pretty sweet gig, all things considered. We've got opposable thumbs so dexterous they could start their own Cirque du Soleil troupe and brains so ripped our skulls can barely contain them. But before you grab your dog and give him a triumphant "IN YOUR (FAITHFUL, ADORABLE) FACE!" #6. What to name a baby is one of the first things that expecting parents obsess about. GettyAll babies look alike, even Theobold Pimpmeister here. And more than that, individual names also make humans special. "Never mind, Christine. Except the talking animals depicted in Disney movies aren't so far off the mark, at least when it comes to a few select species. Wait, what? Dolphins, crows, primates and parrots have all been observed using unique calls when they want the attention of specific members of their groups. Getty"GWAAK! But now that scientists know that parrots have signature calls, a few questions come up, like: Who gets to decide the signature call that's given to each parrot chick?

Death by Advertising "Let me tell you the story of a man killed by advertising." So begins Émile Zola's satirical Death by Advertising, a short fiction story published in 1866 that describes the swift decline of Pierre Landry, a naïve believer in all claims of advertisers. What is remarkable about this story is not just that Zola had developed a compelling – and widely read – critique of advertising a hundred and forty years ago, but that within his imagined world we glimpse the beginnings of the mental environment movement. Pierre Landry is a caricature whose purpose is to show both the absurdity and the dangerous consequences of incessant advertising. Pierre may be a fool but he is a man of conviction as well. Zola's story can be read as two separate, but related, critiques of advertising. But there is a second, more convincing anticonsumer message proposed by Zola that I believe may be one of the first articulations of the mental environment movement.

Backup Plan | BuildTheEnterprise Let’s assume for a moment that say ten years into the development of the Gen1 Enterprise NASA concludes that there is no way to have the ship fully deployed by the 20th year since the start of full funding. So is the program then declared a failure and canceled? Well, no. First, it’s important to recall that the NASA Enterprise program is based on a new law that provides .27% of GDP each year to fund the development of a series of Enterprise ships, one new one every 33 years. But if NASA finds that it will take longer than 20 years, say even the full 33 years, to complete the Gen1 ship then the Gen1 schedule is revised as needed. Similarly, let’s say that the 20 year schedule can be met for the Gen1 Enterprise, but instead of a schedule problem there are cost challenges. This is not to say that we in any way want to drag out the schedule for the Gen1 ship beyond its 20 year development goal or to spend more than $1 trillion on it.

DIY - A handbook for changing our world 6 Beneficial Things They Made You Stop Doing in School It's easy to think of a classroom as a battle of wills between kids who want to dick around all day and teachers who actually want to make them learn. But it's not that simple. A lot of the things that will get you yelled at in a classroom are, in fact, beneficial to learning. They're just really annoying to other people (and the teacher). #6. Getty Teachers must look at the cell phone as the modern plague on their profession. Getty"You can have it back at the end of the semester, if it doesn't sell on eBay." But teachers have a reason to hate texting above even other high-tech time-wasters like portable games. Everybody should stop and take a deep breath, because texting actually improves both your language skills and your ability to pay attention in class. Getty"Holly balls, I understand calculus!" Wait, What? Yes, you read that right. Mark van LaereIt's not Hemingway, but it is a form of literacy. Sounds counter-intuitive? Getty"Well at least they aren't selling drugs. #5. Right. #4.

A Master Class in Occupation - Chris Hedges' Columns A Master Class in Occupation Posted on Oct 31, 2011 By Chris Hedges NEW YORK CITY—Jon Friesen, 27, tall and lanky with a long, dirty-blond ponytail, a purple scarf and an old green fleece, is sitting on concrete at the edge of Zuccotti Park leading a coordination meeting, a gathering that takes place every morning with representatives of each of Occupy Wall Street’s roughly 40 working groups. “Our conversation is about what it means to be a movement and what it means to be an organization,” he says to the circle. I find him afterward on a low stone wall surrounding a flowerbed in the park. “It was a television event when I was 17,” he says of the 2001 attacks. Once he reached New York City he connected with local street people to find “assets.” In those first few days, he says, “it was the radicals and the self-identifying anarchists” who set up the encampment. The Occupy movements that have swept across the country fuse the elements vital for revolt. Next item: Let Herman Be Gone

The seven deadly statistical sins lmost everybody knows pollution is getting worse, few whites are missed in census counts, and the federal budget is in balance. Unfortunately, almost everybody is wrong. None of these things is true, at least not exactly. If that weren't bad enough, many people in power are either among the ill-informed, or have a tendency to cloak political decisions in scientific garb to make their point. Statistical sins differ from data that are incomplete or inaccurate or simply faked outright. fund are removed. Let us count the ways... Sin the first: Non-response bias, or the non-representative sample. Paul Cameron, a former University of Nebraska assistant professor who now heads a group called the Family Research Institute, claims that gay men have an average life expectancy of 43 years.1 He and his co-authors calculated that figure by checking urban gay newspapers for obituaries and news stories about deaths. It is easy to test Cameron's assertion. How much surveying is enough? How equal?

ENOUGH, ANTI-CONSUMERISM CAMPAIGN How To… Embed This Infographic <a href= ‎"><img src=" title="10 How Tos" alt="How To Infographic" border="0" class="nopin" /></a><br />Source: <a href=' title='Interesting Facts'><a href=' title='Interesting Facts'>Today I Found Out</a></a> 1) How to drastically increase the life of your shaving razor Before or after you shave (I prefer before so that the blades are dry), place your jeans on a hard flat surface; then run the razor up the pant legs about 10-15 times quickly; then repeat running it down the pant legs 10-15 times quickly. No need to press that hard, but a little pressure is necessary. necessary. The threads on the jeans then will very effectively both fix any tiny bends in the blades that inevitably happen and will also sharpen the blades on your shaver cartidge.