The World in Action 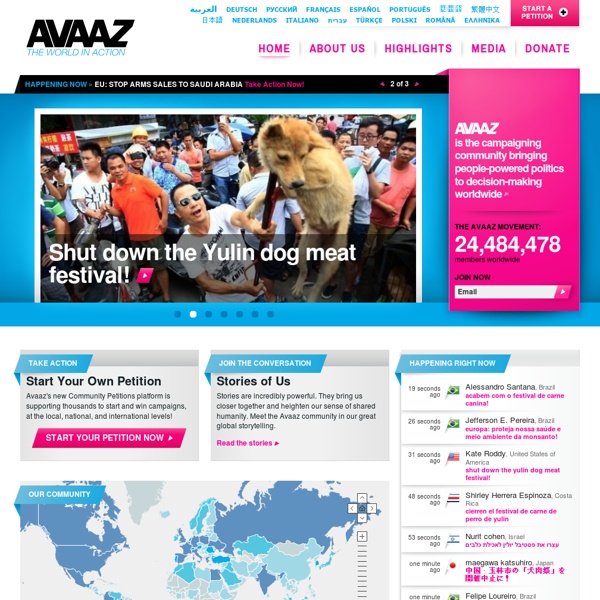 Greta Thunberg, the Fifteen-Year-Old Climate Activist Who Is Demanding a New Kind of Politics Sometimes the world makes so little sense that the only thing to do is engage in civil disobedience—even in a country as attached to its rules and regulations as Sweden is. Fifteen-year-old Greta Thunberg has been protesting for more than a month. Before the country’s parliamentary election on September 9th, she went on strike and sat on the steps of the parliament building, in Stockholm, every day during school hours for three weeks. Since the election, she has returned to school for four days a week; she now spends her Fridays on the steps of parliament.

Highlights from Ignorance survey in the UK Highlights from the first UK survey re ignorance of global trends. A preliminary summary by Hans Rosling, Gapminder Foundation, 3 Nov, 2013 Gapminder’s mission is to fight devastating ignorance about the world with a fact-based worldview that everyone can understand. We started the Ignorance Project to measure what people know and don´t know about major global trends. Read more about the project here: www.gapminder.org/ignorance/ The 2011 All Souls Procession Weekend-Nov. 5/6, 2011 » History The All Souls Procession is perhaps one of the most important, inclusive and authentic public ceremonies in North America today. The Procession had its beginnings in 1990 with a ritualistic performance piece created by local artist Susan Johnson, who was grieving the passing of her father. Inspired by Mexico’s Dia de los Muertos holiday, Johnson felt she should honor her father in celebration and creativity. The performance was very well received and many artists were inspired to continue growing the Procession into its modern incarnation. Today we find ourselves organizing over 35,000 participants on the streets of downtown Tucson for a two-mile long human-powered procession that ends in the finalizing action of burning a large urn filled with the hopes, offerings and wishes of the public for those who have passed. “Festal Culture” is the expression and fulfillment of core human needs through public celebration, ceremony, and ritual.

Developers seeing value in rainwater toilets The 22-story apartment tower in Portland, Oregon, has a roof garden that funnels rainwater to its public toilets. Because the water isn’t treated, state law requires “Do Not Drink” warning signs. “Just in case your dog can read,” said Dennis Wilde, chief sustainability officer for Gerding Edlen, the Portland-based builder of the development called Indigo@Twelve West. Green features, such as reusing rainwater and generating about 1 percent of the tower’s electricity with four rooftop windmills, help the Indigo’s bottom line by saving energy and attracting tenants who pay a premium to live an eco-friendly urban lifestyle, said Mark Edlen, CEO of the company that has developed US$5 billion of residential and commercial real estate since 1996. Last year, the developers of 23,000 US multi-unit buildings applied for Leadership in Energy and Environmental Design (LEED) certification, according to the US Green Building Council, which developed the standards.

Trans-Pacific Partnership undermines health system - Opinion The Trans-Pacific Partnership (TPP) is a deal that is being secretly negotiated by the White House, with the help of more than 600 corporate advisers and Pacific Rim nations, including Australia, Brunei, Canada, Chile, Japan, Malaysia, Mexico, New Zealand, Peru, Singapore and Vietnam. While the TPP is being called a trade agreement, the US already has trade agreements covering 90 percent of the GDP of the countries involved in the talks. Instead, the TPP is a major power grab by large corporations. The text of the TPP includes 29 chapters, only five of which are about trade.

Jeremy Corbyn appoints Labour’s first shadow minister for climate justice Jeremy Corbyn has created a new role on Labour’s front bench, appointing a shadow minister for climate justice to liaise with young popular movements such as Extinction Rebellion. The move comes after the UK parliament became the first in the world to declare an “environment and climate emergency” – a symbolic motion recognising the need to combat the climate crisis. Earlier this year, Mr Corbyn and government ministers also met with the 16-year-old climate activist Greta Thunberg and at the time he pledged to continue “conversations with youth climate strikers”. We’ll tell you what’s true. You can form your own view.

Migrant crisis: Migration to Europe explained in seven charts Image copyright Getty Images More than a million migrants and refugees crossed into Europe in 2015, sparking a crisis as countries struggled to cope with the influx, and creating division in the EU over how best to deal with resettling people. The vast majority arrived by sea but some migrants have made their way over land, principally via Turkey and Albania. Nevil Maskelyne (magician) Maskelyne was the father of Jasper Maskelyne, who continued the family tradition of professional magic. He died in 1924. Maskelyne wrote several books on magic, including Our Magic: The Art in Magic, the Theory of Magic, the Practice of Magic (with David Devant) and On the Performance of Magic.

9 Digital Ways to Make a Difference This Earth Day Are you busy preparing for Earth Day this Sunday? Are you worried that you'll end up being a slacktivist when it comes to saving the planet? Don't fret — there's plenty you can do to make a real difference, even if it's only from your computer or mobile device. Check out the following ways you can use digital channels to get involved this year. European Commission preparing for EU-US trade talks: 119 meetings with industry lobbyists Negotiations on an EU-US ‘free trade’ agreement (Transatlantic Trade and Investment Partnership, TTIP) started in July this year amid strong controversy and public concern about the impacts such an agreement could have on environmental regulations, food standards, data protection and other issues. The European Commission, which represents the EU in the negotiations, has reacted with a propaganda offensive that includes a Q&A website full of misleading claims about the TTIP talks and a ‘@EU_TTIP_team’ that counters critical messages on twitter. In mid-July, the Commission made a huge deal out of the civil society dialogue it had organised in Brussels on the TTIP talks, posting dozens of tweets about the event, praising the “interesting discussion” on issues such as “the environment, transparency, development” with “as many questions from NGOs [...] than there were from Industry”. A disturbing business bias Industry-dominated advisory group in the making?