How to Become an Activist: 12 steps (with pictures) 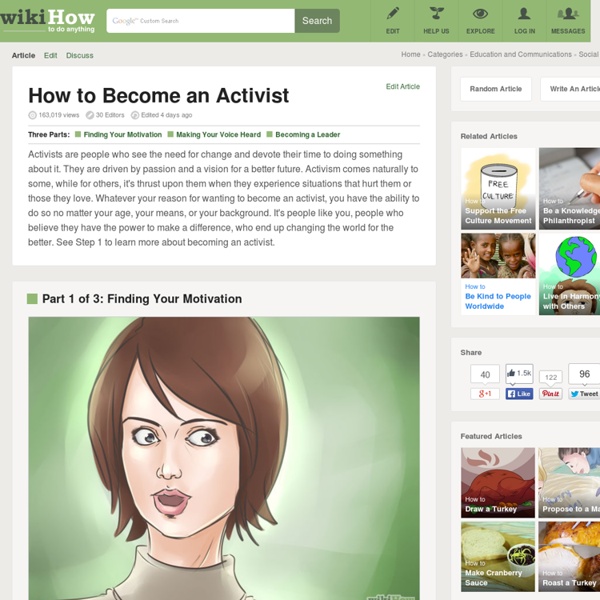 Edit Article163,019 views 30 Editors Edited 4 days ago Three Parts:Finding Your MotivationMaking Your Voice HeardBecoming a Leader Activists are people who see the need for change and devote their time to doing something about it. Ad Steps Part 1 of 3: Finding Your Motivation 1Figure out what you're passionate about. 6Be willing to put in the work without immediate rewards. Part 2 of 3: Making Your Voice Heard 1Speak up about your opinions. 6Expect to encounter dissent. Part 3 of 3: Becoming a Leader

A Summary of Social Activism Techniques | Factnet NewsSite and Discussion Forum A Summary of Social Activism Techniques - Just Add Consciousness: A Guide to Social ActivismBy Liz Carty, Jane Fleming, and Stephanie SeidelThe original of this document is at Important Disclaimer: This article was posted as part an open public debate surrounding various opinions regarding social activism techniques. This article was not created by our organization nor should its posting be considered as an endorsement by our organization. Our organization only endorses non-violent peaceful protest in the tradition of Gandhi or Dr Martin Luther King. Additionally, our organization does not promote or engage in political lobbying nor is it allowed to. Table of Contents: Letter Writing Campaign_ Meet with Your Member of Congress Phone Calling Campaign Time Your Message Use the Media Organize a Teach-In Organize a Demonstration Creative Action Cyber Activism Finance Your Activist Projects Publicity Letter Writing Campaign Sincerely, Tips: 1.

Sociology and Social Activism By Janis Prince Inniss My undergraduate yearbook holds a treasured picture. It’s a picture of me and some friends standing on a shut-down Kissena Boulevard in front of Queens College, the City University of New York (CUNY). We were protesting a proposed hike in tuition that would have seen tuition increase from $1,250 a year. Initially, there was a proposal to raise tuition by $200 annually, but the Governor vetoed that proposal because of student marches and occupations of buildings. At Queens College in Flushing, students seized Jefferson Hall, which houses the offices of the bursar and the registrar, and blocked traffic at Cassena (sic) Boulevard and Horace Harding Boulevard, student leaders there said. The pictures from my yearbook include one of students in front of Jefferson Hall; the student occupation of buildings went on for days at about two-thirds of the 21 CUNY campuses. Sociologists theorize. Indeed, some of us do. More of the same you say?

10 Everyday Acts of Resistance That Changed the World by Steve Crawshaw and John Jackson The Arab spring of 2011 has already changed the region and the world. Ordinary people have lost their fear and shattered the perception that their rulers are invincible. Whatever happens next, the changes across the region in the first few months of 2011 will prove historic. Bottom: January 25, 2011: An anti-government protester defaces a picture of Egypt's President Hosni Mubarak in Alexandria, 140 miles north of Cairo. In Tunisia, the now famous “jasmine revolution” began with protests in December, triggered by the self-immolation of a 26-year-old vegetable seller, Mohammed Bouazizi. Bouazizi, remembered by his younger sister Basma as “funny and generous,” could finally take no more of the official harassment and humiliation meted out to him. Four weeks of protests, fueled by Facebook and other social media networks, concluded with the unthinkable: Zine el Abidine Ben Ali, president for the past 23 years, fled the country. After 18 days of protests, Hosni Mubarek was gone. 1. 2. 3. 4.

Know Your Rights: Demonstrations and Protests November 2, 2011 General guidelines Can my free speech be restricted because of what I say—even if it is controversial? No. The First Amendment prohibits restrictions based on the content of speech. Where can I engage in free speech activity? Generally, all types of expression are constitutionally protected in traditional "public forums" such as streets, sidewalks and parks. What about free speech activity on private property? The general rule is that the owners of private property may set rules limiting your free speech. Do I need a permit before I engage in free speech activity? Not usually. A march or parade that does not stay on the sidewalk, and other events that require blocking traffic or street closure A large rally requiring the use of sound amplifying devices; or A rally at certain designated parks or plazas Many permit procedures require that the application be filed several weeks in advance of the event. Specific problems Yes. Do I have a right to picket on public sidewalks? Yes.