[EDUCATION] 6-part series on p-hacking, what it is, and how to detect it. : statistics. The American Statistical Association's Statement on the Use of P Values. P values have been around for nearly a century and they’ve been the subject of criticism since their origins. 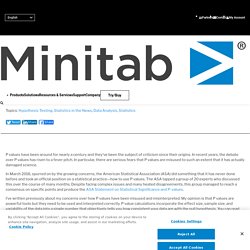 In recent years, the debate over P values has risen to a fever pitch. In particular, there are serious fears that P values are misused to such an extent that it has actually damaged science. In March 2016, spurred on by the growing concerns, the American Statistical Association (ASA) did something that it has never done before and took an official position on a statistical practice—how to use P values. The Practical Alternative to the p Value Is the Correctly Used p Value.

Nobody understands p-values. [Q]Why is p-hacking wrong in this specific context? : statistics. Understanding Statistical Power and Significance Testing. There are two main reasons why frequentist[1] methods are losing popularity: 1. 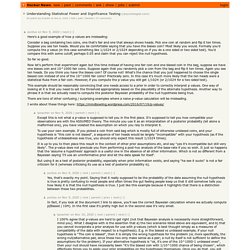 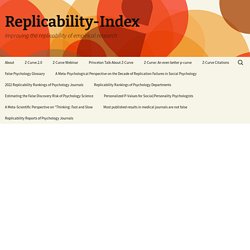 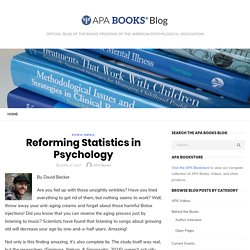 Have you tried everything to get rid of them, but nothing seems to work? Well, throw away your anti-aging creams and forget about those harmful Botox injections! Did you know that you can reverse the aging process just by listening to music? Estimating the evidential value of significant results in psychological science. Abstract Quantifying evidence is an inherent aim of empirical science, yet the customary statistical methods in psychology do not communicate the degree to which the collected data serve as evidence for the tested hypothesis. 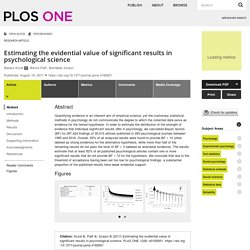 In order to estimate the distribution of the strength of evidence that individual significant results offer in psychology, we calculated Bayes factors (BF) for 287,424 findings of 35,515 articles published in 293 psychological journals between 1985 and 2016. Overall, 55% of all analyzed results were found to provide BF > 10 (often labeled as strong evidence) for the alternative hypothesis, while more than half of the remaining results do not pass the level of BF = 3 (labeled as anecdotal evidence). The results estimate that at least 82% of all published psychological articles contain one or more significant results that do not provide BF > 10 for the hypothesis. “The 2019 ASA Guide to P-values and Statistical Significance: Don’t Say What You Don’t Mean” (Some Recommendations)(ii)

Some have asked me why I haven’t blogged on the recent follow-up to the ASA Statement on P-Values and Statistical Significance (Wasserstein and Lazar 2016)–hereafter, ASA I. 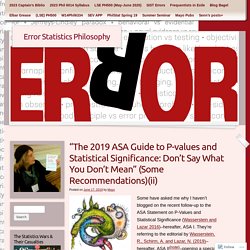 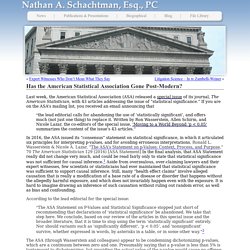 If you are on the ASA’s mailing list, you received an email announcing that “the lead editorial calls for abandoning the use of ‘statistically significant’, and offers much (not just one thing) to replace it. Written by Ron Wasserstein, Allen Schirm, and Nicole Lazar, the co-editors of the special issue, ‘Moving to a World Beyond ‘p < 0.05’ summarizes the content of the issue’s 43 articles.” The Statistical Crisis in Science. This Article From Issue November-December 2014 Volume 102, Number 6 View Issue There is a growing realization that reported “statistically significant” claims in scientific publications are routinely mistaken. 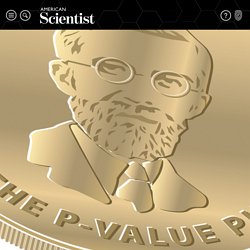 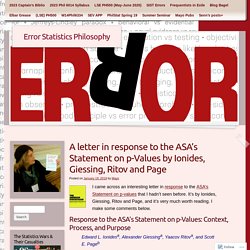 It’s by Ionides, Giessing, Ritov and Page, and it’s very much worth reading. I make some comments below. Edward L. Ionidesa, Alexander Giessinga, Yaacov Ritova, and Scott E. The American Statistical Association statement on P-values explained. How many False Discoveries are Published in Psychology? The ASA's p‐value statement, one year on - Matthews - 2017 - Significance - Wiley Online Library. A little over a year ago now, in March 2016, the American Statistical Association (ASA) took the unprecedented step of issuing a public warning about a statistical method. 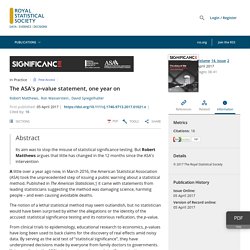 Published in The American Statistician,1 it came with statements from leading statisticians suggesting the method was damaging science, harming people – and even causing avoidable deaths. The notion of a lethal statistical method may seem outlandish, but no statistician would have been surprised by either the allegations or the identity of the accused: statistical significance testing and its notorious reification, the p‐value.

From clinical trials to epidemiology, educational research to economics, p‐values have long been used to back claims for the discovery of real effects amid noisy data. By serving as the acid test of “statistical significance”, they have underpinned decisions made by everyone from family doctors to governments. Not surprisingly, the ASA's statement attracted widespread media coverage. Why I've lost faith in p values — Luck Lab. This might not seem so bad. I'm still drawing the right conclusion over 90% of the time when I get a significant effect (assuming that I've done everything appropriately in running and analyzing my experiments). However, there are many cases where I am testing bold, risky hypotheses—that is, hypotheses that are unlikely to be true.

The 20% Statistician: So you banned p-values, how’s that working out for you? The journal Basic and Applied Social Psychology banned p-values a year ago. I read some of their articles published in the last year. I didn’t like many of them. Here’s why. The ASA s Statement on p Values Context Process and Purpose. About 40% of economics experiments fail replication survey.

When a massive replicability study in psychology was published last year, the results were, to some, shocking: 60% of the 100 experimental results failed to replicate. Now, the latest attempt to verify findings in the social sciences—this time with a small batch from experimental economics—also finds a substantial number of failed replications. Following the exact same protocols of the original studies, the researchers failed to reproduce the results in about 40% of cases. "I find it reassuring that the replication rate was fairly high," says Michael L. Anderson, an economist at the University of California, Berkeley, not involved with the study. Scientists Replicated 100 Psychology Studies, and Fewer Than Half Got the Same Results. Statisticians Found One Thing They Can Agree On: It’s Time To Stop Misusing P-Values. Little p-value What are you trying to say Of significance? — Stephen Ziliak, Roosevelt University economics professor.

They are not full explanations; they assume you have at least met multiple regression before. If you haven't, you will probably need to read Bryman & Cramer, pp. 177-186 and pp. 235-246. What is multiple regression, where does it fit in, and what is it good for? Multiple regression is the simplest of all the multivariate statistical techniques. Hypothesis testing. How confidence intervals become confusion intervals. Most published reports of clinical studies begin with an abstract – likely the first and perhaps only thing many clinicians, the media and patients will read.

Within that abstract, authors/investigators typically provide a brief summary of the results and a 1–2 sentence conclusion. At times, the conclusion of one study will be different, even diametrically opposed, to another despite the authors looking at similar data. In these cases, readers may assume that these individual authors somehow found dramatically different results. While these reported differences may be true some of the time, radically diverse conclusions and ensuing controversies may simply be due to tiny differences in confidence intervals combined with an over-reliance and misunderstanding of a “statistically significant difference.”

Introduction to Probability and Statistics. Calculation and Chance Most experimental searches for paranormal phenomena are statistical in nature. A subject repeatedly attempts a task with a known probability of success due to chance, then the number of actual successes is compared to the chance expectation. If a subject scores consistently higher or lower than the chance expectation after a large number of attempts, one can calculate the probability of such a score due purely to chance, and then argue, if the chance probability is sufficiently small, that the results are evidence for the existence of some mechanism (precognition, telepathy, psychokinesis, cheating, etc.) which allowed the subject to perform better than chance would seem to permit. Suppose you ask a subject to guess, before it is flipped, whether a coin will land with heads or tails up. But suppose this subject continues to guess about 60 right out of a hundred, so that after ten runs of 100 tosses—1000 tosses in all, the subject has made 600 correct guesses.

Statistics Glossary - hypothesis testing. Hypothesis Test. Type 1 & II Errors + other ideas. What is confidence? Part 1: The use and interp... [Ann Emerg Med. 1997. The (mis)use of overlap of confidence intervals to assess effect modification. Worldwide Confusion, P-values vs Error Probability. Fisher vs Neyman-Pearson - dag.pdf. Stat Significance, p-val. An observed positive or negative correlation may arise from purely random effects. Statistical significance testing methodology gives a way of determining whether an observed correlation is just because of random occurrences, or whether it is a real phenomenon, i.e., statistically significant. The ingredients of statistical significance testing are given by the null hypothesis and the test statistic. The null hypothesis describes the case when there is no correlation. Graphpad p-value confusion.

Most of the multiple comparisons tests report 95% confidence intervals for the difference between means, and also reports which of those comparisons are statistically significant after accounting for the number of comparisons. Many scientists want more.