Mark Leslie: Putting the “We” in Leadership. Within the first minute of meeting a CEO, Mark Leslie says he can get a pretty good idea of what kind of culture a company has. 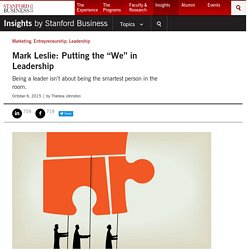 If the CEO’s vocabulary is all “I, me, mine,” then the organization is based on a proprietorship model; it’s focused on making its executives rich, famous, and successful, he says. If the vocabulary is “we, us, ours,” the company is based on a stewardship model, where the leaders and employees work toward a common goal and then share the financial and psychic rewards. Leslie, a high-tech entrepreneur and lecturer in management at Stanford Graduate School of Business, is all about the collaborative model. “Stewardship is about what we can do together to build something great and that we then can be proud of,” he says. The best-run organizations “create environments that attract the best and the brightest people. It’s All About Building Trust Managers who want to build trust with their employee need to demonstrate trust first, Leslie says. Mark Leslie. Start with values, not your idea — Spook Studio.

Daniel McFarland: What Is the Secret to a Happy Collaboration? At the core of most successful organizations are people who work well together. 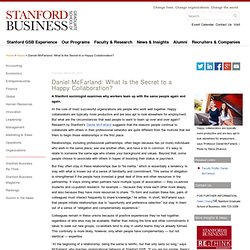 Happy collaborators are typically more productive and are less apt to look elsewhere for employment. But what are the circumstances that lead people to want to team up over and over again? Research by Stanford’s Daniel McFarland suggests that the reasons people continue to collaborate with others in their professional networks are quite different from the motives that led them to begin those relationships in the first place.

Relationships, including professional partnerships, often begin because two (or more) individuals who work in the same place, see one another often, and have a lot in common. It’s easy to relate to someone the same age who shares your background and values. But they often stay in these relationships due to “tie inertia,” which is essentially a tendency to stay with what is known out of a sense of familiarity and commitment. Building a High-Trust Culture #1: It Starts with Integrity. Great Brands Never Have to "Give Back" - Denise Lee Yohn. By Denise Lee Yohn | 9:00 AM February 6, 2014 A recent headline, “JCPenney Releases 2013 Sustainability Report,” reads like the punch line to a bad joke. 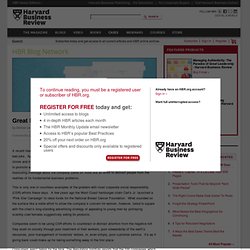 Apparently the struggling department store company, which is closing 33 underperforming stores and incurred a net loss of nearly $500 million in its last reported quarter, felt it was important to promote a report detailing its sustainability activities. What JCPenney probably intended as a reassuring message about the company came off more like an effort to distract people from the realities of its fundamental business problems. This is only one of countless examples of the problem with most corporate social responsibility (CSR) efforts these days.

A few years ago the West Coast hamburger chain Carl’s Jr. launched a “Pink Star Campaign” to raise funds for the National Breast Cancer Foundation. Consumers aren’t falling for the trick. Even well-run, well-intentioned companies get it wrong. Doing well by doing good is not a new idea. Be No Ego from GiveMore.com. Warren Buffett: The three things I look for in a person. Students often go to visit Warren Buffett. And when they do, he often plays a little game on them. He asks each student to pick a classmate. Not just any classmate, but the classmate you would choose if you could have 10% of their earnings for the rest of their life. Which classmate would you pick and why? “Are you going to pick the one with the highest IQ?” Then he changes things up again. He asks the students to take out a sheet of paper and list the positive attributes on the left and the negative ones on the right. Inevitably, the most useful qualities have nothing to do with IQ, grades, or family connections.

He then asks the students which of the qualities they are incapable of having and which they are incapable of stopping? “To Buffett, the answer is none,” writes Michael Eisner in Working Together: Why Great Partnerships Succeed . It’s quite simple in the end. “You’re looking for three things, generally, in a person,” says Buffett. Buffett and Munger were fortunate. Warren Buffett: The three things I look for in a person.