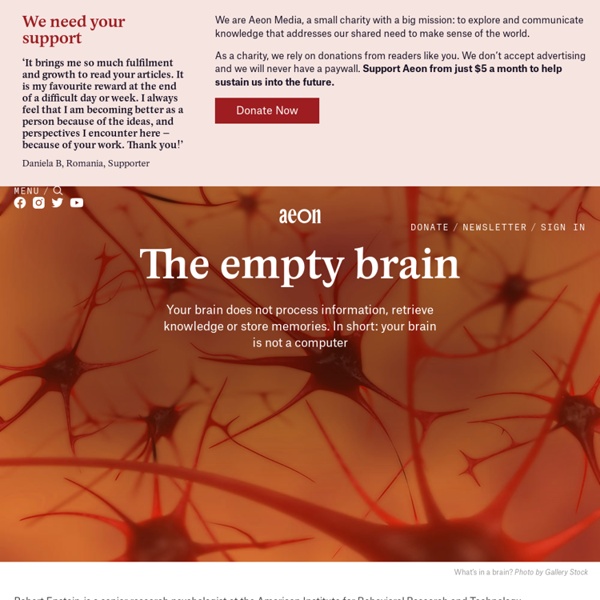 No matter how hard they try, brain scientists and cognitive psychologists will never find a copy of Beethoven’s 5th Symphony in the brain – or copies of words, pictures, grammatical rules or any other kinds of environmental stimuli. The human brain isn’t really empty, of course. But it does not contain most of the things people think it does – not even simple things such as ‘memories’. Our shoddy thinking about the brain has deep historical roots, but the invention of computers in the 1940s got us especially confused. For more than half a century now, psychologists, linguists, neuroscientists and other experts on human behaviour have been asserting that the human brain works like a computer. To see how vacuous this idea is, consider the brains of babies. A healthy newborn is also equipped with more than a dozen reflexes – ready-made reactions to certain stimuli that are important for its survival. We don’t store words or the rules that tell us how to manipulate them.

Tesla’s Secret Behind The Numbers 3, 6, and 9 Is Finally REVEALED! - Superhv Nikola Tesla did countless mysterious experiments, but he was a whole other mystery on his own. Almost all genius minds have a certain obsession. Nikola Tesla had a pretty big one! He was walking around a block repeatedly for three times before entering a building, he would clean his plates with 18 napkins, he lived in hotel rooms only with a number devisable by 3. He would make calculations about things in his immediate environment to make sure the result is devisable by 3 and base his choices upon the results.

?kh=-1&uddg= If you are looking forward to your first stiff drink after a dry January, be warned: it may feel bittersweet. You may feel you deserve an alcoholic beverage after toughing it out all month – but have you forgotten what it feels like to wake up haunted by worries about what you said or did the night before? These post-drinking feelings of guilt and stress have come to be known colloquially as “hangxiety”. But what causes them? Preparing for Venus Retrograde: Cleansing Rituals to Get Rid of Old Lovers & Bad Love Juju. get elephant's newsletter We perform rituals every day—getting ready for work, how we make our coffee the same way or how we prepare to go to bed. In our modern era we have largely lost track of rituals that cleanse, clear or make space and rarely do we talk about literally cleaning ourselves and our space after a relationship ends or we have conflict in our current one. With Venus, the planet of love, intimacy and creativity, going retrograde on July the 25th, now is the perfect time to clear out exes, old lovers or even past strain and pain in your current relationship. It will give us an opportunity to “go back” and clear up our own energy in these areas and create the space for literally new relationships or new forms in our current relationship.

Scientists say your “mind” isn’t confined to your brain, or even your body - Ideapod Did you know that your mind and your brain aren’t the same thing? According to scientists, the mind may be linked to the brain, but it can exist beyond it, and even beyond our bodies. If that feels like a big pill to swallow, don’t worry, there’s a perfectly good explanation surrounding why scientists think this way. No long, twisted tail trails the solar system The solar system doesn’t have a long, twisted tail after all. Data from the Cassini and Voyager spacecraft show that the bubble of particles surrounding the solar system is spherical, not comet-shaped. Observing a spherical bubble runs counter to 55 years of speculation on the shape of this solar system feature, says Tom Krimigis of the Johns Hopkins Applied Physics Laboratory in Laurel, Md.

The Mindblowing Secret Behind The Numbers 3, 6, and 9 Is Finally REVEALED! Nikola Tesla did countless mysterious experiments, but he was a whole other mystery on his own. Almost all genius minds have a certain obsession. Nikola Tesla had a pretty big one! He was walking around a block repeatedly for three times before entering a building, he would clean his plates with 18 napkins, he lived in hotel rooms only with a number devisable by 3.

We may finally know what causes Alzheimer’s – and how to stop it By Debora MacKenzie If you bled when you brushed your teeth this morning, you might want to get that seen to. We may finally have found the long-elusive cause of Alzheimer’s disease: Porphyromonas gingivalis, the key bacteria in chronic gum disease. That’s bad, as gum disease affects around a third of all people. The Healing Power in Owning Our Privileges — Rest For Resistance “We are experimenting with new strategies of survival. Their efficacy is necessarily not reflected in dominant culture, and yet throughout history we hear stories of folks refusing competition in precisely this way and daring to walk together to another rhythm . . . We just have to remember we are not alone in this journey. We sit to practice being with ourselves so we can better sit, love, and live with those who will show up and help us along the way.”

Patti Smith describes feeling 'like a 7yo' as stage fright takes hold at Bob Dylan's Nobel Prize ceremony Updated Media player: "Space" to play, "M" to mute, "left" and "right" to seek. Error loading player: No playable sources found Video: Patti Smith on how she copes with death. (ABC News) Despite being one of the music industry's most enduring artists, Patti Smith says it is never too late in your career to learn a lesson or two in the value of failure. Picatrix: An ancient manuscript that teaches how to obtain energy from the cosmos “Through this ancient manuscript…the reader could attract and channel the energy of the cosmos so that a certain event develops according to the will of the practitioner, zodiacal magic; which is said to help master and dominate with accuracy—through the force of the universe—nature and its surroundings.” The Picatrix is an ancient Arabian book of astrology and occult magic dating back to the 10th or 11th century, which has gained notoriety for the obscene natural of its magical recipes. The Picatrix, with its cryptic astrological descriptions and spells covering almost every conceivable wish or desire, has been translated and used by many cultures over the centuries, and continues to fascinate occult followers from around the world.

Visions of the Future Imagination is our window into the future. At NASA/JPL we strive to be bold in advancing the edge of possibility so that someday, with the help of new generations of innovators and explorers, these visions of the future can become a reality. As you look through these images of imaginative travel destinations, remember that you can be an architect of the future. Secrets of the Creative Brain - The Atlantic - Pocket As a psychiatrist and neuroscientist who studies creativity, I’ve had the pleasure of working with many gifted and high-profile subjects over the years, but Kurt Vonnegut—dear, funny, eccentric, lovable, tormented Kurt Vonnegut—will always be one of my favorites. Kurt was a faculty member at the Iowa Writers’ Workshop in the 1960s, and participated in the first big study I did as a member of the university’s psychiatry department. I was examining the anecdotal link between creativity and mental illness, and Kurt was an excellent case study. He was intermittently depressed, but that was only the beginning. His mother had suffered from depression and committed suicide on Mother’s Day, when Kurt was 21 and home on military leave during World War II.

Own, Apologize, Repair: Coming Back to Integrity There is a variation on ‘Not All Men.’ It is called ‘I Feel Bad When You Say That.’ My godson Kyle is six. He is fairly emotionally perceptive for his age, as his grownups have been working with him to create an emotionally responsible and self-aware boy who we hope will grow into an emotionally responsible and self-aware man. He knows at six that when you hurt someone, you go back right away and own, apologize, and do repair.