Home to The First Electronic Computers 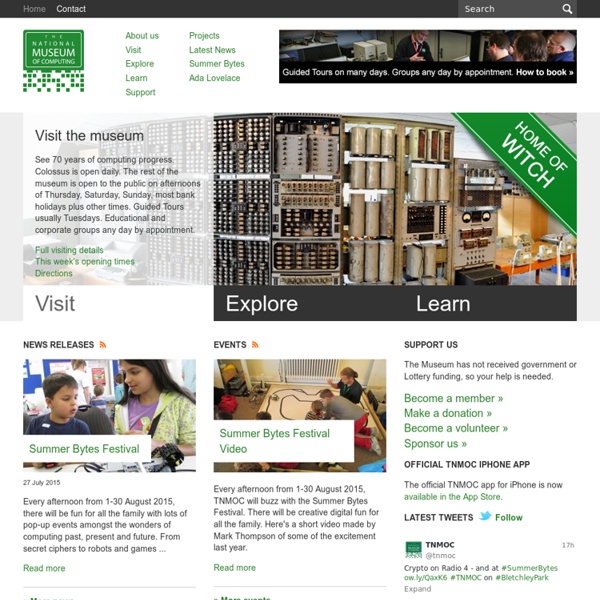 World’s First Computer Rebuilt, Rebooted After 2,000 Years | Gadget Lab A British museum curator has built a working replica of a 2,000-year-old Greek machine that has been called the world’s first computer. A dictionary-size assemblage of 37 interlocking dials crafted with the precision and complexity of a 19th-century Swiss clock, the Antikythera mechanism was used for modeling and predicting the movements of the heavenly bodies as well as the dates and locations of upcoming Olympic games. The original 81 shards of the Antikythera were recovered from under the sea (near the Greek island of Antikythera) in 1902, rusted and clumped together in a nearly indecipherable mass. Scientists dated it to 150 B.C. Such craftsmanship wouldn’t be seen for another 1,000 years — but its purpose was a mystery for decades. Many scientists have worked since the 1950s to piece together the story, with the help of some very sophisticated imaging technology in recent years, including X-ray and gamma-ray imaging and 3-D computer modeling. Now, though, it has been rebuilt.

Vintage Calculators Web Museum Who was Ada? | Ada Lovelace Day Who was Ada Lovelace? By Sydney Padua, author of The Thrilling Adventures of Lovelace & Babbage. Read the longer biography of Ada Lovelace by Suw Charman-Anderson, taken from our book, A Passion for Science: Stories of Discovery and Invention, but for a short overview of her life and achievements, read on! The woman most often known as ‘Ada Lovelace’ was born Ada Gordon in 1815, sole child of the brief and tempestuous marriage of the erratic poet George Gordon, Lord Byron, and his mathematics-loving wife Annabella Milbanke. Fearing that Ada would inherit her father’s volatile ‘poetic’ temperament, her mother raised her under a strict regimen of science, logic, and mathematics. At the age of 19 she was married to an aristocrat, William King; when King was made Earl of Lovelace in 1838 his wife became Lady Ada King, Countess of Lovelace. The Analytical Engine Her thwarted potential, and her passion and vision for technology, have made her a powerful symbol for modern women in technology.

Computer History John Kopplin © 2002 Just a few years after Pascal, the German Gottfried Wilhelm Leibniz (co-inventor with Newton of calculus) managed to build a four-function (addition, subtraction, multiplication, and division) calculator that he called the stepped reckoner because, instead of gears, it employed fluted drums having ten flutes arranged around their circumference in a stair-step fashion. Although the stepped reckoner employed the decimal number system (each drum had 10 flutes), Leibniz was the first to advocate use of the binary number system which is fundamental to the operation of modern computers. Leibniz is considered one of the greatest of the philosophers but he died poor and alone. Leibniz's Stepped Reckoner (have you ever heard "calculating" referred to as "reckoning"?) Jacquard's Loom showing the threads and the punched cards By selecting particular cards for Jacquard's loom you defined the woven pattern [photo © 2002 IEEE] A close-up of a Jacquard card

Jacquard loom This portrait of Jacquard was woven in silk on a Jacquard loom and required 24,000 punched cards to create (1839). It was only produced to order. Charles Babbage owned one of these portraits; it inspired him in using perforated cards in his analytical engine.[1] It is in the collection of the Science Museum in London, England.[2] It is based on earlier inventions by the Frenchmen Basile Bouchon (1725), Jean Baptiste Falcon (1728) and Jacques Vaucanson (1740)[6] A static display of a Jacquard loom is the centrepiece of the Musée des Tissus et des Arts décoratifs[7] in Lyon. Live displays of a Jacquard loom are available at a few private museums around Lyon and also twice a day at La Maison des Canuts, as well as at other locations around the world. Principles of operation[edit] The term "Jacquard loom" is somewhat inaccurate. Importance in computing[edit] The Jacquard head used replaceable punched cards to control a sequence of operations. See also[edit] Jacquard weaving References[edit]

Her Code Got Humans on the Moon—And Invented Software Itself Margaret Hamilton wasn’t supposed to invent the modern concept of software and land men on the moon. It was 1960, not a time when women were encouraged to seek out high-powered technical work. Hamilton, a 24-year-old with an undergrad degree in mathematics, had gotten a job as a programmer at MIT, and the plan was for her to support her husband through his three-year stint at Harvard Law. After that, it would be her turn—she wanted a graduate degree in math. But the Apollo space program came along. As a working mother in the 1960s, Hamilton was unusual; but as a spaceship programmer, Hamilton was positively radical. “People used to say to me, ‘How can you leave your daughter? Then, as now, “the guys” dominated tech and engineering. ‘When I first got into it, nobody knew what it was that we were doing. As Hamilton’s career got under way, the software world was on the verge of a giant leap, thanks to the Apollo program launched by John F. Advertisement ‘That would never happen’ But it did.

Moore's Law Cuil - Wikipedia Cuil (/ˈkuːl/ KOOL) was a search engine that organized web pages by content and displayed relatively long entries along with thumbnail pictures for many results. Cuil said it had a larger index than any other search engine, with about 120 billion web pages.[1] It went live on July 28, 2008.[1] Cuil's servers were shut down on September 17, 2010, with later confirmations the service had ended.[2][3][4] Cuil was managed and developed largely by former employees of Google, Anna Patterson and Russell Power. The CEO and co-founder, Tom Costello, has worked for IBM and others.[5] The company had raised $33 million from venture capital firms including Greylock.[6] Cuil's privacy policy,[7] unlike that of other search engines,[8] said it did not store users’ search activity or IP addresses.[7] History[edit] Shutdown[edit] PC Magazine reported that on the morning of September 17, 2010 "employees were told about Cuil's demise [...] and the servers were taken offline five hours later Features[edit]

Which Of These Internet Pioneers Was Pivotal In Creating A Decentralized, Communication-Centered Internet? Answer: Robert Taylor Today it seems like an absolutely elementary concept: geographically distant computer networks are the most useful when they are all connected. It’s the fundamental underpinning of the Internet as we now know it: thousands of small networks around the world linked together into a greater network. It’s what makes sharing everything from scientific research to pictures of your cat incredibly easy and lightning fast. In the early days of computing, however, networks were in their own little silos. Early Internet pioneer Robert Taylor had a vision to change that. Under Taylor’s guidance, the ARPANET project took form and the various ARPA computer networks around the country were retrofitted with dedicated nodes designed to link all of them together in what would become the proto-Internet.

How the ZX Spectrum helped bring about famed pop parody Frank Sidebottom Walk down any British high street in the 1980s, and you’d be bombarded by an array of computers for sale. The Commodore 64, Dragon 32 and Acorn Electron formed a wave of microcomputers, so-called for their small size and cost. The best remembered of all the “micros” arguably came from Cambridge based company Sinclair Research Ltd. Their ZX81 was a silent, black-and-white machine. The rise of the micros was significant for British business, and the company’s founder, Sir Clive Sinclair, became a poster child for entrepreneurship – although he was eventually forced to sell Sinclair Research to Amstrad’s Alan Sugar in 1986, after a disastrous flirtation with the C5 electric vehicle. But a different kind of cultural entrepreneur was behind the micro boom, too. They were often seen as young geeks, and this was sometimes true. Sitting at their keyboards, bedroom coders had unique, almost auteur-like, visions for their code. Listen to the code The late Chris Sievey knew this better than most.