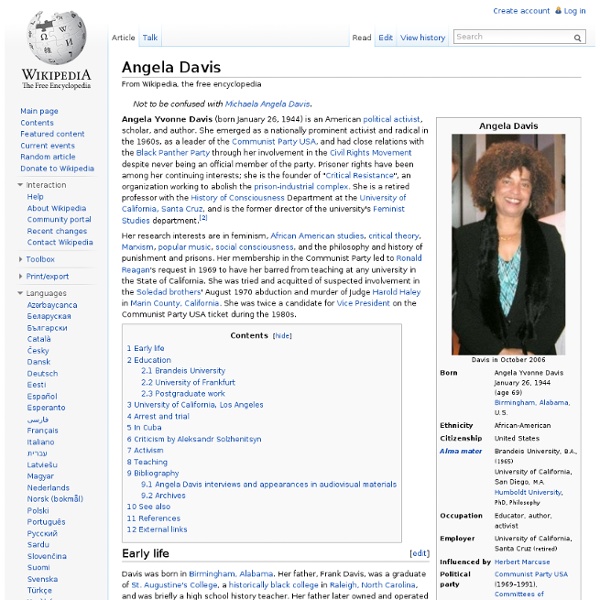 Angela Yvonne Davis (born January 26, 1944) is an American political activist, scholar, and author. She emerged as a nationally prominent counterculture activist and radical in the 1960s, as a leader of the Communist Party USA, and had close relations with the Black Panther Party through her involvement in the Civil Rights Movement despite never being an official member of the party. Prisoner rights have been among her continuing interests; she is the founder of Critical Resistance, an organization working to abolish the prison-industrial complex. She is a retired professor with the History of Consciousness Department at the University of California, Santa Cruz, and is the former director of the university's Feminist Studies department.[2] Her research interests are in feminism, African-American studies, critical theory, Marxism, popular music, social consciousness, and the philosophy and history of punishment and prisons. Early life[edit] Davis attended Carrie A. Education[edit] Related:  Social change advocates

Cesar Chavez Cesar Chavez (born César Estrada Chávez, locally: [ˈsesaɾ esˈtɾaða ˈtʃaβes]; March 31, 1927 – April 23, 1993) was an American farm worker, labor leader and civil rights activist, who, with Dolores Huerta, co-founded the National Farm Workers Association (later the United Farm Workers union, UFW).[1] A Mexican American, Chavez became the best known Latino American civil rights activist, and was strongly promoted by the American labor movement, which was eager to enroll Hispanic members. His public-relations approach to unionism and aggressive but nonviolent tactics made the farm workers' struggle a moral cause with nationwide support. By the late 1970s, his tactics had forced growers to recognize the UFW as the bargaining agent for 50,000 field workers in California and Florida. However, by the mid-1980s membership in the UFW had dwindled to around 15,000.[2] Early life and education The Chavez family faced many hardships in California. Activism Worker's rights Animal rights Controversies

Stetson Kennedy William Stetson Kennedy (October 5, 1916 – August 27, 2011) was an American author and human rights activist. One of the pioneer folklore collectors during the first half of the 20th century, he is remembered for having infiltrated the Ku Klux Klan in the 1940s, exposing its secrets to authorities and the outside world. His actions led to the 1947 revocation by the state of Georgia of the Klan's national corporate charter.[1] Kennedy wrote or co-wrote ten books. Biography and activities[edit] Kennedy was named for a member of his mother's family, the hatter John Batterson Stetson.[1] As a teenager, he began collecting folklore material while seeking "a dollar down and dollar a week" accounts for his father, a furniture merchant. In 1937, he left the University of Florida to join the WPA Florida Writers' Project, and at the age of 21, was put in charge of folklore, oral history, and ethnic studies. In 2007 St. Kennedy in 1991 Beluthahatchee Park[edit] It's preposterous.

Deng Fei goes beyond journalism to right wrongs in China Investigative reporter Deng Fei won plaudits and nearly 3 million Chinese microblog followers with a string of articles on sensitive topics such as child trafficking, organ harvesting from death-penalty victims, and shoddy school construction. Skip to next paragraph Deng Fei (l.) began an influential blog that encourages readers to contribute to solutions. His latest cause: better nutrition for some 26 million rural schoolchildren. Peter Ford/The Christian Science Monitor Subscribe Today to the Monitor Click Here for your FREE 30 DAYS ofThe Christian Science MonitorWeekly Digital Edition Now he is parlaying his reputation into a groundbreaking project to turn his readers into active agents of social change in China. Last year Mr. "Journalists can do more than just write articles. Deng made his name over the past 10 years with articles published in Phoenix magazine in Hong Kong, where censorship is not the problem it is in mainland China. Then he took an unusual step for a journalist.

Malala Yousafzai Pakistani children's education activist and Nobel laureate Malala Yousafzai (Urdu: ملالہ یوسفزئی‎; Pashto: ملاله یوسفزۍ‎ [məˈlaːlə jusəf ˈzəj];[2] born 12 July 1997),[1][2][3] often referred to mononymously as Malala, is a Pakistani activist for female education and the youngest Nobel Prize laureate.[4] She is known for human rights advocacy, especially the education of women and children in her native Swat Valley in Khyber Pakhtunkhwa, northwest Pakistan, where the local Pakistani Taliban had at times banned girls from attending school. Her advocacy has grown into an international movement, and according to former Pakistani Prime Minister Shahid Khaqan Abbasi, she has become "the most prominent citizen" of the country.[5] The daughter of educational activist Ziauddin, Yousafzai was born to a Pashtun family in Mingora, Khyber Pakhtunkhwa, Pakistan. Her family came to run a chain of schools in the region. Early life Childhood Yousafzai with her father in 2013 As a BBC blogger Early activism

Ward Churchill Ward LeRoy Churchill (born October 2, 1947) is an American author and political activist. He was a professor of ethnic studies at the University of Colorado Boulder from 1990 to 2007. The primary focus of his work is on the historical treatment of political dissenters and Native Americans by the United States government. His work features controversial and provocative views, written in a direct, often confrontational style.[1] In January 2005, Churchill's work attracted publicity because of the widespread circulation of a 2001 essay, "On the Justice of Roosting Chickens". In March 2005 the University of Colorado began investigating allegations that Churchill had engaged in research misconduct; it reported in June 2006 that he had done so.[3] Churchill was fired on July 24, 2007,[4] leading to a claim by some scholars that he was fired because of the "Little Eichmanns" comment.[5] Churchill filed a lawsuit against the University of Colorado for unlawful termination of employment.

Tank Man Coordinates: "Tank Man" temporarily stops the advance of a column of tanks on June 5, 1989, in Beijing, in what is widely considered one of the iconic images of the 20th century.[1][2][3] This photograph (one of four similar versions) was taken by Jeff Widener of the Associated Press. The Tank Man, or the Unknown Protester, is the nickname of an anonymous man who stood in front of a column of tanks on June 5, 1989, the morning after the Chinese military had suppressed the Tiananmen Square protests of 1989 by force. The man achieved widespread international recognition due to the videotape and photographs taken of the incident. The incident[edit] The incident took place near Tiananmen on Chang'an Avenue, which runs east-west along the south end of the Forbidden City in Beijing, China on June 5, 1989, one day after the Chinese government's violent crackdown on the Tiananmen protests. Identity and fate[edit] International notability and censorship[edit] Photographic versions[edit] Notes[edit]

Martin Luther King, Jr. Dr. King became a civil rights activist early in his career. He led the 1955 Montgomery Bus Boycott and helped found the Southern Christian Leadership Conference (SCLC) in 1957, serving as its first president. On October 14, 1964, King received the Nobel Peace Prize for combating racial inequality through nonviolence. In 1968, King was planning a national occupation of Washington, D.C., to be called the Poor People's Campaign, when he was assassinated on April 4 in Memphis, Tennessee. King was posthumously awarded the Presidential Medal of Freedom and the Congressional Gold Medal. Early life and education King was born on January 15, 1929, in Atlanta, Georgia, to Reverend Martin Luther King, Sr. and Alberta Williams King.[1] King's legal name at birth was Michael King,[2]and his father was also born Michael King, but the elder King changed his and his son's names following a 1934 trip to Germany to attend the Fifth Baptist World Alliance Congress in Berlin. Doctoral studies Religion

Rigoberta Menchú Rigoberta Menchú Tum (Spanish pronunciation: [riɣoˈβerta menˈtʃu], born 9 January 1959) is an indigenous Guatemalan woman, of the K'iche' ethnic group. Menchú has dedicated her life to publicizing the plight of Guatemala's indigenous peoples during and after the Guatemalan Civil War (1960–1996), and to promoting indigenous rights in the country. She received the 1992 Nobel Peace Prize and Prince of Asturias Award in 1998. Menchú is a UNESCO Goodwill Ambassador. Life[edit] Rigoberta Menchú was born to a poor indigenous family of K'iche' descent near Laj Chimel, a small town in the north-central Guatemalan province of El Quiché. Her father, Vicente Menchú, was a member of the guerrilla movement Guerrilla Army of the Poor and died in 1980 during the Burning of the Spanish Embassy after being captured and tortured for his role in organizing against abusive landowners. Politics[edit] In 2009 she was involved in the newly founded party Winaq. Controversies about her testimony[edit] Ament, Gail.

Mumia Abu-Jamal Mumia Abu-Jamal (born Wesley Cook[1] on April 24, 1954) is an American prisoner convicted for the 1981 murder of Philadelphia police officer Daniel Faulkner.[2] His original sentence of death, handed down at his first trial in July 1982, was commuted to life imprisonment without parole in 2012.[3] Described as "perhaps the world's best known death-row inmate" by The New York Times,[4] supporters and detractors have disagreed on his guilt, whether he received a fair trial, and the appropriateness of the death penalty.[5][6][7] Born in Philadelphia, Abu-Jamal became involved in black nationalism in his youth, and was a member of the Black Panther Party until October 1970. Alongside his political activism, he became a radio journalist, eventually becoming president of the Philadelphia Association of Black Journalists. On December 9, 1981, Officer Faulkner was shot dead while conducting a traffic stop on Abu-Jamal's brother, William Cook. Early life and activism[edit] Daniel Faulkner

Asmaa Mahfouz Asmaa Mahfouz (Arabic: أسماء محفوظ‎, pronounced [ʔæsˈmæːʔ mɑħˈfuːz, ˈʔæsmæ-], born 1 February 1985) is an Egyptian activist and one of the founders of the April 6 Youth Movement.[1] She has been credited by journalist Mona Eltahawy and others with helping to spark mass uprising through her video blog posted one week before the start of the 2011 Egyptian revolution.[2][3] She is a prominent member of Egypt's Coalition of the Youth of the Revolution and one of the leaders of the Egyptian revolution.[4] In 2011, she was one of five recipients of the "Sakharov Prize for Freedom of Thought" awarded for contributions to "historic changes in the Arab world." The other joint recipients were Ahmed al-Senussi, Razan Zaitouneh, Ali Farzat and Mohamed Bouazizi of the Arab Spring. Arabian Business placed Mahfouz at #381 on its list of the World's 500 Most Influential Arabs.[5] Overview[edit] January 2011 uprising in Egypt[edit] If you think yourself a man, come with me on 25 January. See also[edit]

Subcomandante Marcos Subcomandante Marcos or Subcomandante Insurgente Marcos is the nom de guerre used by the main ideologist, spokesperson and de facto leader of the Zapatista Army of National Liberation (EZLN), a Mexican rebel movement fighting for the rights of the indigenous peoples of Mexico. On 1 January 1994, when the U.S.–Mexico–Canada free trade agreement became effective, Subcommander Marcos led an army of Mayan farmers into eastern Chiapas state, to protest what he saw as the Mexican federal government's mistreatment of the nation's indigenous peoples.[1] Marcos is also a writer, a political poet, and an anti-capitalist who advocates the amendment of the Political Constitution of Mexico to formally and specifically recognize the political and the human rights of Mexico's indigenous peoples.[2] Background[edit] Identity[edit] Subcomandante Marcos (center, wearing brown cap) in Chiapas In an interview with García Márquez and Roberto Pombo, Marcos spoke of his upbringing: "It was middle class.