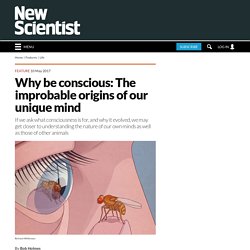 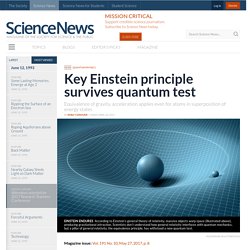 The equivalence principle — one of the central tenets of Einstein’s theory of gravity — survived a quantum test, scientists report online April 7 at arXiv.org. In Einstein’s gravity theory — the general theory of relativity — gravity and acceleration are two sides of the same coin. According to the equivalence principle, the gravitational mass of an object, which determines the strength of gravity’s pull, is the same as its inertial mass, which determines how much an object accelerates when given a push (SN: 10/17/15, p. 16).

As a result, two objects dropped on Earth’s surface should accelerate at the same rate (neglecting air resistance), even if they have different masses or are made of different materials. The scientists then compared the result of this test to one where both clouds were in a normal energy state. Quand la science se remet en question - THEMA : Le temps des ruptures. Scientists Find There Is A Distortion In SPACE And TIME - Cosmos. NASA has confirmed that there is a distortion in space and time, and this news has been interpreted as proof that we do not understand our universe as well as we thought. 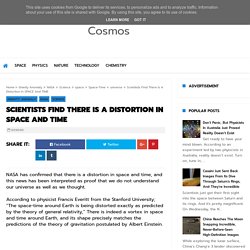 According to physicist Francis Everitt from the Stanford University; “The space-time around Earth is being distorted exactly as predicted by the theory of general relativity,” There is indeed a vortex in space and time around Earth, and its shape precisely matches the predictions of the theory of gravitation postulated by Albert Einstein. Even though it appears to look like something that should only matter to the scientific community, this extraordinarily important finding confirms the possibility of distorting time and space, using the distortion to make possible all the incredible things proposed in science fiction movies, making star-ships disappear to later appear somewhere entirely different in the universe.

The results were confirmed by scientists thanks to the results of the satellite Gravity Probe B aka GP-B. Des virus doués de parole - Science & Vie. Incroyables virus ! 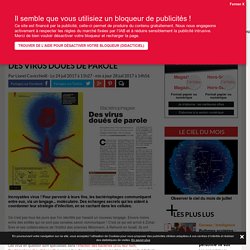 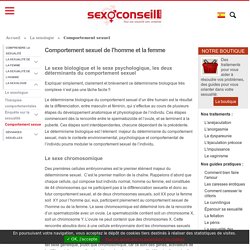 Scientists Discover That Our Brains Can Process The World In 11 Dimensions - Cosmos. Neuro-scientists have used a classic branch of maths in a totally new way to peer into the structure of our brains. 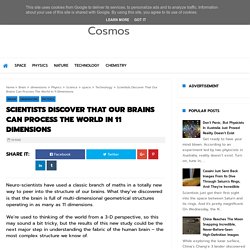 What they’ve discovered is that the brain is full of multi-dimensional geometrical structures operating in as many as 11 dimensions. We’re used to thinking of the world from a 3-D perspective, so this may sound a bit tricky, but the results of this new study could be the next major step in understanding the fabric of the human brain – the most complex structure we know of. Une expérience quantique pourrait nous aider à comprendre le fonctionnement de la conscience. Un physicien théoricien souhaite repousser les limites de la physique quantique en effectuant un test de Bell, en utilisant des êtres humains comme liens. 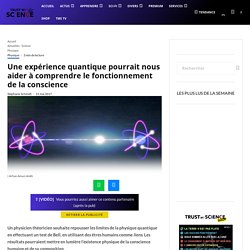 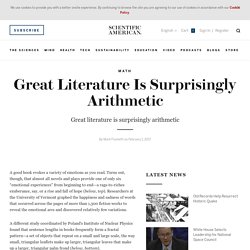 Turns out, though, that almost all novels and plays provide one of only six “emotional experiences” from beginning to end—a rags-to-riches exuberance, say, or a rise and fall of hope (below, top). Researchers at the University of Vermont graphed the happiness and sadness of words that occurred across the pages of more than 1,300 fiction works to reveal the emotional arcs and discovered relatively few variations. A different study coordinated by Poland's Institute of Nuclear Physics found that sentence lengths in books frequently form a fractal pattern—a set of objects that repeat on a small and large scale, the way small, triangular leaflets make up larger, triangular leaves that make up a larger, triangular palm frond (below, bottom).

Why analyze the mathematics of literature? Alphabet glagolitique. U.S. to Fund Advanced Brain-Computer Interfaces - MIT Technology Review. Beautiful Brain: The Stunning Drawings of Neuroscience Founding Father Santiago Ramón y Cajal. Quirks of the arXiv. Why the "You" in an Afterlife Wouldn't Really Be You. The Discovery is a 2017 Netflix film in which Robert Redford plays a scientist who proves that the afterlife is real. 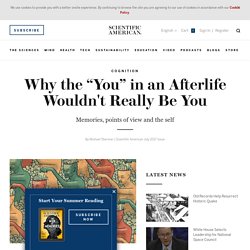 “Once the body dies, some part of our consciousness leaves us and travels to a new plane,” the scientist explains, evidenced by his machine that measures, as another character puts it, “brain wavelengths on a subatomic level leaving the body after death.” La quête du noir absolu - Science & Vie. A physicist explained why the Large Hadron Collider disproves the existence of ghosts. Recent polls have found that 42 percent of Americans and 52 percent of people in the UK believe in ghosts - a huge percentage when you consider that no one has ever come up with irrefutable proof that they even exist. 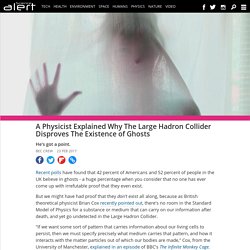 But we might have had proof that they don't exist all along, because as British theoretical physicist Brian Cox recently pointed out, there's no room in the Standard Model of Physics for a substance or medium that can carry on our information after death, and yet go undetected in the Large Hadron Collider. "If we want some sort of pattern that carries information about our living cells to persist, then we must specify precisely what medium carries that pattern, and how it interacts with the matter particles out of which our bodies are made," Cox, from the University of Manchester, explained in an episode of BBC's The Infinite Monkey Cage.

Yet miraculously, the man was not only fully conscious, but lived a rich and unhindered life, working as a civil servant and living with his wife and two kids, blissfully unaware of the gaping hole in his brain. His ability to function without so many of the key brain regions previously considered vital for consciousness raises some major questions about existing theories regarding how the brain works and the mechanisms underlying our awareness. For example, neuroscientists have often asserted that a brain region called the thalamus, which relays sensory signals to the cerebral cortex, is indispensable for consciousness. This is because research has indicated that damage to the thalamus often causes people to fall into a coma, while one team of scientists were even able to manually “switch off” an epileptic patient’s consciousness by electrically stimulating this brain region.

Image: A brain region called the thalamus has been shown to be vital for consciousness to exist. "Origin of the Universe Riddle Solved- and,er, It Wasn't God" Claim Canadian Physicists. A Group of researchers have made what may turn out to be the most significant discovery in HISTORY – how the cosmos came into being from nothing. The immense question has concerned religions, philosophers and researchers since the dawn of time but now a Canadian group of scientists consider that they have finally solved this riddle. And the results are so convincing they even challenge the need for religion, or in any case an omnipotent creator – the foundation of all world religions. A group of scientists led by Prof Mir Faizal, at the Dept of Physics and Astronomy, at the University Of Waterloo, Canada, has positively applied the theory to the very creation of existence itself.

Medical Xpress: Neurons' faulty wiring leads to serotonin imbalance, depression-like behavior in mice. Columbia scientists have identified a gene that allows neurons that release serotonin—a neurotransmitter that regulates mood and emotions—to evenly spread their branches throughout the brain. Without this gene, these neuronal branches become entangled, leading to haphazard distribution of serotonin, and signs of depression in mice. These observations shed light on how precise neuronal wiring is critical to overall brain health, while also revealing a promising new area of focus for studying psychiatric disorders associated with serotonin imbalance—such as depression, bipolar disorder, schizophrenia and autism. The findings were published today in Science. "By pinpointing the genes that guide the organization of neurons, we can draw a line between changes to those genes, and the cellular, circuitry and behavioral deficiencies that can occur as a result," said Tom Maniatis, PhD, a principal investigator at Columbia's Mortimer B.

Zuckerman Mind Brain Behavior Institute, the Isidore S. Le cerveau humain depuis le paléolithique- Hominidés. This new gene map could force a rethink of how vertebrate brains evolved. As complex as the human brain is, it more or less has the same fundamental structure as most other backboned animals - which means it can be divided into three general regions: forebrain, midbrain, and hindbrain. Researchers have long thought that these three sections all evolved from three simpler versions in our vertebrate ancestors. Reached Via a Mind-Reading Device, Deeply Paralyzed Patients Say They Want to Live - MIT Technology Review.

In 1995, Jean-Dominique Bauby suffered a massive stroke that left him paralyzed and speechless, with only the ability to blink his left eyelid. Using just that eye, he silently dictated his memoir, The Diving Bell and the Butterfly, later adapted into a film. Bauby suffered from “locked-in syndrome,” in which patients are completely paralyzed except for some eye movement. Some patients eventually lose even the ability to blink, cutting off all contact with the world and raising questions of whether they are still fully conscious and, if so, whether they still wish to live. The Brain Has Its Own "Autofill" Function for Speech. The world is an unpredictable place. But the brain has evolved a way to cope with the everyday uncertainties it encounters—it doesn’t present us with many of them, but instead resolves them as a realistic model of the world.

The body’s central controller predicts every contingency, using its stored database of past experiences, to minimize the element of surprise. Here's what Cassini heard as it made its daring dive between Saturn and its rings - ImaGeo. A Simon and Garfunkel song comes to mind—and that has scientists scratching their heads as the spacecraft heads today for a second dive. In this illustration, the Cassini spacecraft is shown diving between Saturn and the planet’s innermost ring. (Source: NASA/JPL-Caltech) As the Cassini spacecraft swooped between Saturn and its innermost ring on April 26th, one of its instruments listened for the sounds of its passage through the heretofore unexplored region.

What it heard was of great interest to engineers planning for the second dive, as well as to scientists who study Saturn’s rings. The engineers were hoping to hear the sound of silence, specifically nothing indicative of lots of dust hitting the spacecraft. We Have Weird New Details On The Strangest Symbiotic Relationship Ever Found. How dark matter became a particle. It took decades for dark matter to enter the lexicon of particle physics. Today, explaining the nature and abundance of dark matter is one of the most pressing problems in the field. Un rite mystérieux chez les chimpanzés. En Afrique de l'ouest, et seulement là, des chimpanzés ont une drôle d'habitude : ils jettent de lourdes pierres contre un arbre, toujours le même.

Quantum Physics: Are Entangled Particles Connected Via An Undetected Dimension? This physicist says consciousness could be a new state of matter. What is energy? Computer solves a major time travel problem. Another study just linked chronic fatigue syndrome to gut bacteria. The discovery of alien life may be close. How will religion survive it? Picatrix: An ancient manuscript that teaches how to obtain energy from the cosmos.

Astronomers Observe Strange Quantum Distortion in Empty Space for the First Time Ever. Can we see a singularity, the most extreme object in the universe? Is the multiverse physics, philosophy, or something else entirely? Physics-Astronomy. Immune cells play surprising role in steady heartbeat. Brain scans of one-handed people are completely changing our understanding of the brain. Your true self: How your personality changes throughout life. An inflamed brain may be a hidden cause of depression. Sait-on à quoi ressemble l'ultime instant ? - Science-et-vie.com. There’s still a lot we don’t know about the proton. Huge New Study Reveals The Impact Of Spanking On Children. What are "Neural Correlates" Correlates Of? - Neuroskeptic. Fixing broken brains: a new understanding of depression. New Quantum Equation Suggests The Big Bang Never Happened And Our Universe Has No Beginning - Sci-Tech Universe.