In Pictures: Online computer tutorials based on pictures. Free. 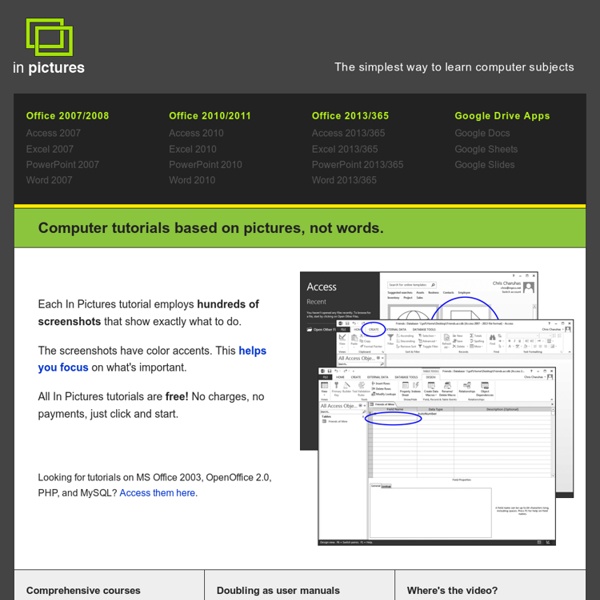 Chapter 19 - What Happens When You Start Your Computer This chapter describes what happens when you start a computer that has a Windows NT installed as one of the operating systems. In general, this chapter describes what happens at each step in the process when the computer successfully starts. Chapter 21, "Troubleshooting Startup and Disk Problems," discusses what you can do to isolate startup problems, and how to recover from them. This chapter also describes dual-booting and triple-booting other operating systems, such as Windows 95 and MS-DOS.

Photo Manipulation Tutorials: 50+ Wickedly Creative Tips Since our last Photoshop tutorial titled: Adobe Photoshop Tutorials: Collection of Amazing Tips And Tricks , we got so much positive feedback that we decided to put together another collection of tutorials concentrating on photo manipulation. In this post, you’ll find everything from How to Create Cityscape Concept Art to Making a Devastating Tidal Wave in Photoshop. Now the hard part will be deciding which of these amazing tutorials you will use in your next creations. Hope you enjoy! Want more articles on useful tutorials? Check out some of my previous post: Milk and Booze! How To Make Sweet Milk Liqueur Milk liqueur: a Portuguese recipe made from equal parts vodka (or grappa), milk, and sugar. Say hello to the newest addition to our liquor cabinet! This rather improbable combination of vodka and milk makes a liqueur so smooth and perfectly sweet that you'll want to sip it straight. Get the recipe, our review, and some ideas for using this sweet liqueur below.

Cheap GPUs are rendering strong passwords useless Think that your eight-character password consisting of lowercase characters, uppercase characters and a sprinkling of numbers is strong enough to protect you from a brute force attack? Think again! Jon Honeyball writing for PC Pro has a sobering piece on how the modern GPU can be leveraged as a powerful tool against passwords once considered safe from bruteforce attack. Why Monetary Expansion Must Stop - Patrick Barron [Address delivered at the European Parliament in Brussels on March 16, 2011] Introduction: The Illusion of Unlimited Resources The current problems faced by all the world's economies stem, primarily, from one source: the demise of sound money, whose quantity could not be increased without significant cost, and its replacement with fiat money that can be inflated to infinite amounts at almost no cost to the producer. Expansion of fiat money makes it appear to all market participants, including financial regulators, that there are more resources available than really exist. Thusly, all participants, including governments, embark on programs that cannot be completed; there just are not enough resources in the economy. Not only does fiat money create the illusion of greater wealth, it makes embarking on new projects irresistible.

Getting Started So you want to take advantage of the power of the OpenGL API? If you are visiting this page because a game or software uses the OpenGL API, you need to install the appropriate graphic driver which enables usage of the functionality provided. To program using the OpenGL API, you need the driver and the development package (depends on platform and programming language). More platform-specific details are described in the sections below. 12 Absolutely and Insanely Essential Utilities For Programmers In every era in recent times there has been one profession that for a short while you could enter without formal training. Autodidacts in the 19th century could read the law without recourse to formal education (see Abe Lincoln). In the early 20th century it was aviation. For a short while in the 1980s and early 1990s, it was computing, thanks to the release of the Apple IIe, the IBM PC and the Mac.

Design Crush & Popsicles! - StumbleUpon Not to sound full of myself, but I’m pretty sure this is the be all, end all of popsicle roundups. There’s a little something for everyone: the foodies, the purists, the ones who prefer frozen yogurt, the ones who prefer a little alcohol, everyone. Tweny-five options to be exact. The post I did last summer on the cold guys was one of DC’s most viewed ever, so I thought you’d all be up for another round – was I right? Click on the photo to be taken to the recipe. projects Installing NAS4FreeApril 09, 2013 With so many of our memories and purchases existing only in the digital realm, having a reliable method of storing them is essential. We've written a guide to help you to install NAS4Free - free software which provides several methods of protecting your data by mirroring it across multiple disks. NAS4Free is very scalable product supporting both UFS and ZFS, meaning it is a great choice for Mini-ITX systems - which can vary from low power consumption Atoms up to powerful Core i7 and Xeon based systems. Installing NAS4Free Building an XBMC 12 Home Theatre PC with a Mini-ITX motherboardFebruary 28, 2013