And the Benefits for Happiness and Fitness. 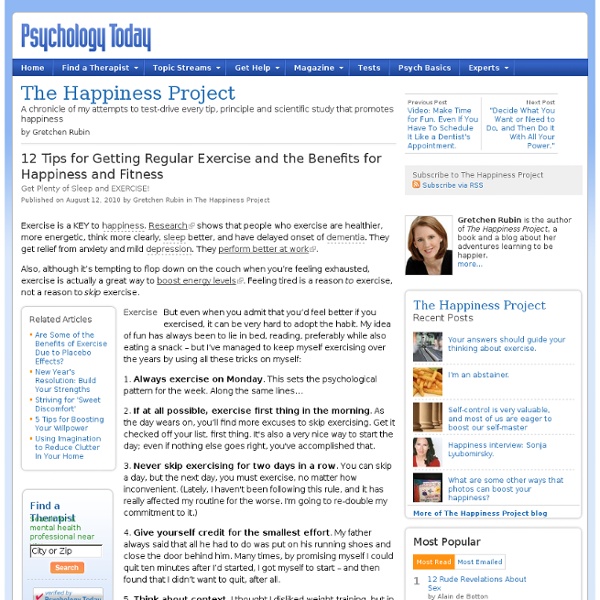 Exercise is a KEY to happiness . Research shows that people who exercise are healthier, more energetic, think more clearly, sleep better, and have delayed onset of dementia . They get relief from anxiety and mild depression . They perform better at work . Also, although it’s tempting to flop down on the couch when you’re feeling exhausted, exercise is actually a great way to boost energy levels . Feeling tired is a reason to exercise, not a reason to skip exercise. But even when you admit that you’d feel better if you exercised, it can be very hard to adopt the habit. 1. 2. 3. 4. 5. 6. 7. 8. 9. 10. 11. 12. People often ask me, “So if I want to be happier, what should I be doing?” I know, that answer doesn’t sound properly transcendent and high-minded on the subject of happiness, but research shows that you’d be wise to start there. * Just spent a looooong time reading Starfish Envy .

13 Things Mentally Strong People Don't Do Mentally strong people have healthy habits. They manage their emotions, thoughts, and behaviors in ways that set them up for success in life. Check out these things that mentally strong people don’t do so that you too can become more mentally strong. 1. They Don’t Waste Time Feeling Sorry for Themselves Mentally strong people don’t sit around feeling sorry about their circumstances or how others have treated them. Me, Myself and My Stranger: Understanding the Neuroscience of Selfhood Where are you right now? Maybe you are at home, the office or a coffee shop—but such responses provide only a partial answer to the question at hand. Asked another way, what is the location of your "self" as you read this sentence? Like most people, you probably have a strong sense that your conscious self is housed within your physical body, regardless of your surroundings.

Mark Hyman, MD: Three Hidden Ways Wheat Makes You Fat Gluten-free is hot these days. There are books and websites, restaurants with gluten free menus, and grocery stores with hundreds of new gluten-free food products on the shelf. Is this a fad, or a reflection of response to a real problem? Yes, gluten is a real problem. Note to ‘selfish’ couple with ‘screaming baby’ at Colo. ski area hotel: ‘Babies don’t ski!’ This note was reportedly slipped under the door of a couple staying at a hotel at a Colorado ski resort in February 2014. Click on the image to see the note in its entirety. (Photo: Facebook / DadOnTheRun) After struggling through an evening with a crying infant at a hotel reportedly located at a Colorado ski resort recently, a couple awoke to a rather unpleasant surprise in the form of a nasty note slipped under their door.

Madonna–whore complex In sexual politics the view of women as either Madonnas or whores limits women's sexual expression, offering two mutually exclusive ways to construct a sexual identity.[4] The term is also used popularly, often with subtly different meanings. Causes[edit] Freud argued that the Madonna–whore complex is caused by oedipal castration fears which arise when a man experiences the affection he once felt for his mother with women he now sexually desires. In order to manage this anxiety, the man categorizes women into two groups: women he can admire and women he finds sexually attractive. Whereas the man loves women in the former category, he despises and devalues the latter group.[5] Psychoanalyst Richard Tuch suggests that Freud offered at least one alternative explanation for the Madonna–whore complex:

David Katz, M.D.: A Matter of Minutes There has been a steady and resonant drumbeat of news lately, rapping out the profound health benefits of even modest physical activity. I think we can, and should, all pick our preferred drummer, and find a way to march to it. Among the more noteworthy news items was a Lancet paper some weeks ago indicating that physical inactivity now ranks as one of the top causes of premature death globally. We have long known it made the short list here in the U.S., but a marquee role in worldwide mortality was an eye-opening revelation. 16 Amazing Facts About Sleep That Will Surely Impress You You need to sleep every day and sleeping is so important to you that lacking it could shorten your life. But I guess you didn’t really know much about sleep until you read this, right? Some of the facts about sleep really surprised me!

Color Psychology by David Johnson Like death and taxes, there is no escaping color. It is ubiquitous. Yet what does it all mean? Why are people more relaxed in green rooms? Why do weightlifters do their best in blue gyms? 10 Signs That You’re Fully Awake Isn’t it obvious that there is a significant global awakening happening? Just as the Mayans predicted so many years ago, the apocalypse would become apparent in 2012. But many misinterpret the apocalypse to be the end of the world, when in fact it actually means an “un-covering, a revelation of something hidden.”