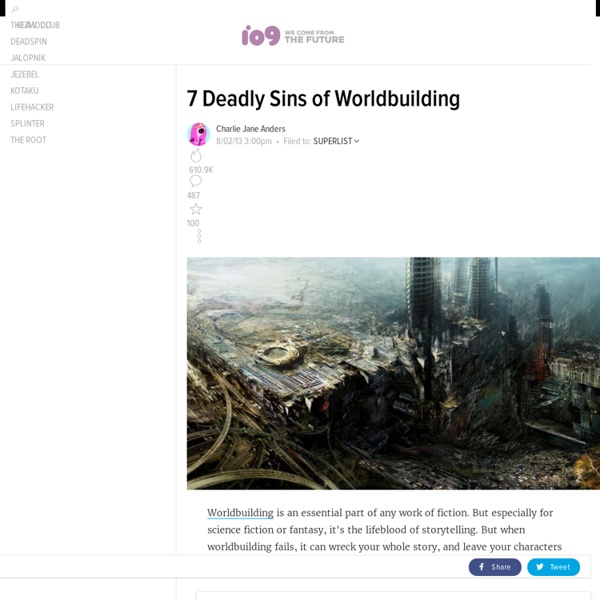 Dialect — Thorny Games In 'Dialect', we follow the story of a community in isolation as seen through their language. We explore how the community's speech evolves as they face challenges, establish values, and contrast themselves from the society they've left behind. We'll embody characters within the Isolation, using this emergent language to express the interactions within the community. In the end, we'll witness the decline of the language and examine how the community lost its identity.

How to Make a Fantasy World Map Any good fantasy world deserves a map, but how does a world map go from your notebook to an espansive illustration that provides depth and information? Read on as Isaac Stewart shares his process for making the map for The Emperor’s Blades, the first book in Brian Staveley’s new fantasy series Chronicles of the Unhewn Throne. The book is out on January 14th but you can read the first seven chapters for FREE right here. How to Write a Synopsis of Your Novel by Glen C. Strathy* To sell your novel, you may need to know how to write a synopsis, even if you are a pantser-type novelist who can write a whole novel without making an outline first. Agents and publishers will often ask for a synopsis along with sample chapters before they request a complete manuscript. The biggest mistake most people make when they try to write a synopsis for the first time is to create a bare bones plot summary, along the lines of “First this happens, then this happens, then this happens...”

Generating fantasy maps These are some notes on how I generate the maps for my Twitter bot @unchartedatlas, which is based on a generator I originally produced during NaNoGenMo 2015. There's JavaScript code for the generator on Github here, and the original messy Python generator code can be seen here. You may also be interested in this companion piece, which describes the placename generation. Inspiration I wanted to make maps that look like something you'd find at the back of one of the cheap paperback fantasy novels of my youth.

Character Trait Cheat Sheet - Kris Noel In order to create a relatable character, you must think about them as having several layers. Knowing and choosing character traits is important because you don’t want them to be one dimensional. It’s all not as simple as saying “this person is mean” or “this person is kind”. Think about the people you know in real life.

Writing Tips - Publishers list of phrases for writers to avoid We have all met people who have the extraordinary ability to talk in clichés: Y’know, not to beat around the bush or hedge your bet, this section is a must-read because it calls a spade a spade and in a nutshell leaves no stone unturned to pull the rug from under those off-the-cuff, old-hat bête noires called clichés. These are the people who’ve given the cliché its bad name. We all tend to use them, of course. Sometimes that familiar phrase is the neatest way of expressing yourself and most of us can, in a flash (cliché), unconsciously call up a few hundred of them to help us out in writing and conversation. But how aware are we of the irritation (or worse, sniggering) that the overuse of clichés can cause?

FAQS About Worldbuilding How important is worldbuilding? How important is your story to you? People hear the word “worldbuilding” and automatically assume that the discussion is going to apply only to people who are writing science fiction and fantasy — after all, for everyone else, this is the world they’re going to be writing in, and it has already been built. How to Write Better: 7 Instant Fixes Does your writing stand out? Do you worry whether your writing is good enough? I can see you nodding your head. You are not alone. Every writer has doubts about his or her writing.