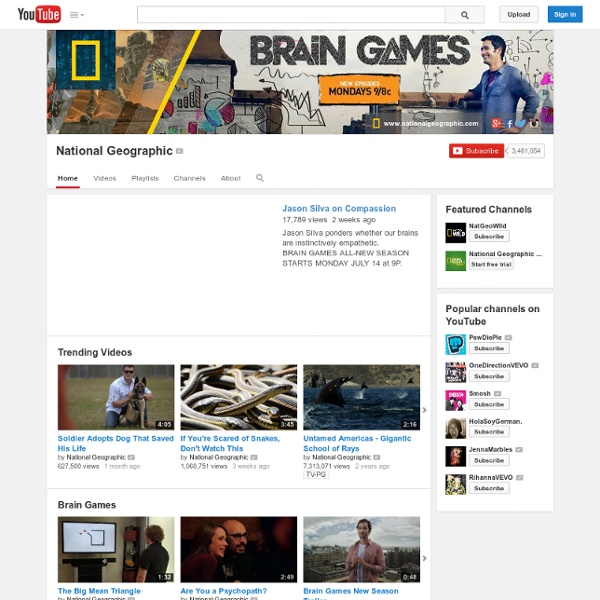 Simple animation to explain complex principles - Electronics - StumbleUpon 1, aircraft radial engine 2, oval Regulation 3, sewing machines 4, Malta Cross movement - second hand movement used to control the clock 5, auto change file mechanism 6, auto constant velocity universal joint Common Misunderstandings of Evolution: Part 1 While an open and honest debate is always a good thing, most of the time, when people are pointing out “problems” in evolution, their qualms arise from a misunderstanding of what evolution actually is and how the mechanisms of evolution actually function. Below are some of the most common misconceptions (or questions) in evolution and how science answers these concerns. Q1.)

5 Insane Ways Words Can Control Your Mind On some level we already know that language shapes the way we think. We're automatically more afraid to fight a guy named Jack Savage than somebody named Peewee Nipplepuss, even if we've never seen either of them before. It's totally illogical, but you probably run into an example of that every day, and don't notice it. While we tend to think words are just sounds we make to express ideas, science is finding that language is more like a fun house mirror, warping what we see in mind-blowing ways.

NOVA Can Wind Turbines Make You Sick? Residents living in the shadows of wind turbines say the sound is making them sick. But so far the science isn't there. From NOVA Next | Jun 27, 2018 8 Simple Questions You Won't Believe Science Can't Answer The field of science is capable of some amazing things, mostly because it's filled with all the Albert Einsteins and Doogie Howsers the world has produced over the centuries. But it may shock you that some of the most mundane, everyday concepts are as big a mystery to scientists as they are to the average toddler. Things like ... #8. Why We Sleep As far as we know, virtually every creature on earth enjoys a good night's rest as much as people do (though the hours we choose to sleep varies greatly).

Google’s smart contact lens: What it does and how it works It’s a question that Google officials have clearly thought a lot about, said Joseph Lorenzo Hall, chief technologist at the Center for Democracy & Technology, who was briefed on the lens before the company’s Thursday announcement. Hall said that Google assured him that the data would not be added to the company’s banks of personal information gathered from other services. “The data will never hit Google’s servers,” he said. “That’s a forward-thinking affirmative claim that they’re making.

7 Man-Made Substances that Laugh in the Face of Physics The universe is full of weird substances like liquid metal and whatever preservative keeps Larry King alive. But mankind isn't happy to accept the weirdness of nature when we can create our own abominations of science that, due to the miracle of technology, spit in nature's face and call it retarded. That's why we came up with... #7. XFINITY Connect: Oral History Your Privacy is a Priority Facebook Connect allows you to use your Facebook credentials to login to certain portions of XFINITY TV and XFINITY.com. Comcast does not send your Comcast account or billing information to Facebook as part of this connection process. You can read more about which portions of XFINITY TV and XFINITY.com support Facebook Connect, here.

Don't Feed the Plants! Everyone should be familiar with the genus Dionea or "Venus Fly Trap" above, but the vegetative world is home to plenty stranger, and while perhaps not as adrenaline-pumping as Crustaceans or as gruesome as Amphibians, plants provide food, shelter and oxygen for the entire kingdom Animalia, so they certainly deserve the spotlight once in a while, and their weirdness does not disappoint. Rather unremarkable in appearance from above, these tiny aquatic plants are actually carnivorous, and display one of the most sophisticated mechanisms (carnivorous or otherwise) in the entire known plant kingdom. The "bladders" of the plant's namesake are thousands of tiny, sac-like pods which hang from submerged branches, each equipped with a hinged "door" and membranous seal held shut by a delicate equilibrium of pressure.

Glow in the Dark Powder - Zinc Sulfide with Mini Black Light We cracked the secret to making your favorite concoctions glow in the dark! Glow Powder is a fine powder called zinc sulfide that glows an eerie green light when the lights go off. Our team of creative teachers packed the included activity guide with a bunch of great ideas... from glowing alien blobs to glow-in-the-dark putty.