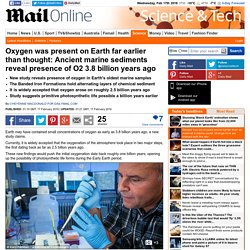 Currently, it is widely accepted that the oxygenation of the atmosphere took place in two major steps, the first dating back as far as 2.5 billion years ago. These new findings would push the initial oxygenation date back roughly one billion years, opening up the possibility of photosynthetic life forms during the Early Earth period. Earth may have contained small concentrations of oxygen as early as 3.8 billion years ago, a new study claims. Carbon Dioxide Rocketed to Highest Levels in Human History in April.

As scientists expected, April became the first month in human history to have an average concentration of carbon dioxide — the main long-lived global warming gas — above 400 parts per million (ppm), according to data from a National Oceanic and Atmospheric Administration (NOAA) observatory, which sits atop a 11,000-foot-tall Hawaiian volcano. 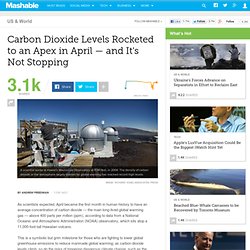 This is a symbolic but grim milestone for those who are fighting to lower global greenhouse emissions to reduce manmade global warming; as carbon dioxide levels climb, so do the risks of triggering dangerous climate change, such as the melting of land-based ice sheets and flooding of coastal cities. As Mashable reported on April 8, the month started out with carbon dioxide, or CO2, above 400 ppm, a milestone that had been reached only briefly in mid-May 2013. In fact, the 400 ppm threshold was first reached (although not maintained) this year in mid-March, a full two months earlier than it last year. Atmosphere of Earth. Composition of Earth's atmosphere by volume. 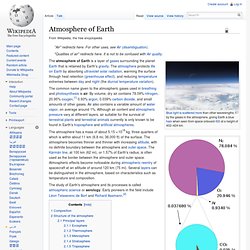 The lower pie represents the trace gases which together compose 0.038% of the atmosphere. The numbers are from a variety of years (mainly 1987, with CO2 and methane from 2009) and do not represent any single source. The common name given to the atmospheric gases used in breathing and photosynthesis is air. By volume, dry air contains 78.09% nitrogen, 20.95% oxygen,[1] 0.93% argon, 0.039% carbon dioxide, and small amounts of other gases. Air also contains a variable amount of water vapor, on average around 1%. Earth's Atmosphere Layer 1: Troposphere. Space Shuttle Endeavour appears to straddle the stratosphere and mesosphere in this photo. 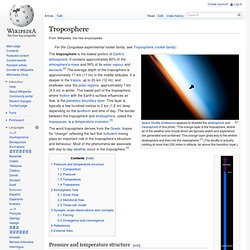 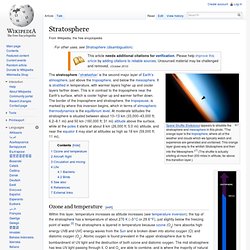 "The orange layer is the troposphere, where all of the weather and clouds which we typically watch and experience are generated and contained. This orange layer gives way to the whitish Stratosphere and then into the Mesosphere. Ozone layer. The ozone layer refers to a region of Earth's stratosphere that absorbs most of the Sun's UV radiation. 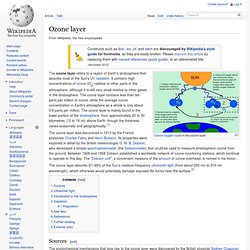 It contains high concentrations of ozone (O3) relative to other parts of the atmosphere, although it is still very small relative to other gases in the stratosphere. The ozone layer contains less than ten parts per million of ozone, while the average ozone concentration in Earth's atmosphere as a whole is only about 0.6 parts per million. The ozone layer is mainly found in the lower portion of the stratosphere, from approximately 20 to 30 kilometres (12 to 19 mi) above Earth, though the thickness varies seasonally and geographically.[1] Ozone. Ozone /ˈoʊzoʊn/ (systematically named 1λ1,3λ1-trioxidane and μ-oxidodioxygen), or trioxygen, is an inorganic molecule with the chemical formula O 3(μ-O) (also written [O(μ-O)O] or O 3). 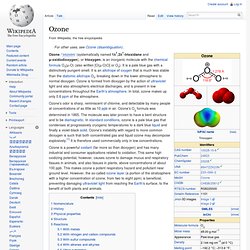 It is a pale blue gas with a distinctively pungent smell. It is an allotrope of oxygen that is much less stable than the diatomic allotrope O 2, breaking down in the lower atmosphere to normal dioxygen. Ozone is formed from dioxygen by the action of ultraviolet light and also atmospheric electrical discharges, and is present in low concentrations throughout the Earth's atmosphere. In total, ozone makes up only 0.6 ppm of the atmosphere. Ozone's odor is sharp, reminiscent of chlorine, and detectable by many people at concentrations of as little as 10 ppb in air.

Ozone is a powerful oxidant (far more so than dioxygen) and has many industrial and consumer applications related to oxidation. Nomenclature[edit] The trivial name ozone is the most commonly used and preferred IUPAC name. History[edit] Earth's Atmosphere Layer 3: Mesosphere. Space Shuttle Endeavour appears to straddle the stratosphere and mesosphere in this photo. 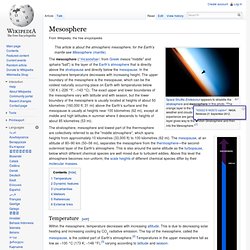 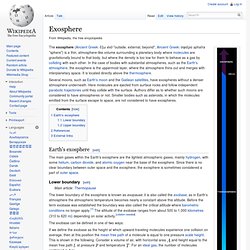 The layers are to scale. From Earth's surface to the top of the stratosphere (50km) is just under 1% of Earth's radius. The exosphere (Ancient Greek: ἔξω éxō "outside, external, beyond", Ancient Greek: σφαῖρα sphaĩra "sphere") is a thin, atmosphere-like volume surrounding a planetary body where molecules are gravitationally bound to that body, but where the density is too low for them to behave as a gas by colliding with each other. 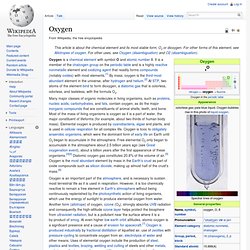 Oxygen is an important part of the atmosphere, and is necessary to sustain most terrestrial life as it is used in respiration. However, it is too chemically reactive to remain a free element in Earth's atmosphere without being continuously replenished by the photosynthetic action of living organisms, which use the energy of sunlight to produce elemental oxygen from water. Another form (allotrope) of oxygen, ozone (O 3), strongly absorbs UVB radiation and consequently the high-altitude ozone layer helps protect the biosphere from ultraviolet radiation, but is a pollutant near the surface where it is a by-product of smog. At even higher low earth orbit altitudes, atomic oxygen is a significant presence and a cause of erosion for spacecraft.[7] Oxygen is produced industrially by fractional distillation of liquefied air, use of zeolites with pressure-cycling to concentrate oxygen from air, electrolysis of water and other means.

Characteristics. Oxygen evolution. Oxygen evolution is the process of generating molecular oxygen through chemical reaction. Mechanisms of oxygen evolution include the oxidation of water during oxygenic photosynthesis, electrolysis of water into oxygen and hydrogen, and electrocatalytic oxygen evolution from oxides and oxoacids. Oxygen evolution in nature[edit] Photosynthetic oxygen evolution is the fundamental process by which breathable oxygen is generated in earth's biosphere. The reaction is part of the light-dependent reactions of photosynthesis in cyanobacteria and the chloroplasts of green algae and plants. It utilizes the energy of light to split a water molecule into its protons and electrons for photosynthesis. [edit] Great Oxygenation Event. O2 build-up in the Earth's atmosphere. Red and green lines represent the range of the estimates while time is measured in billions of years ago (Ga). Stage 1 (3.85–2.45 Ga): Practically no O2 in the atmosphere. Stage 2 (2.45–1.85 Ga): O2 produced, but absorbed in oceans & seabed rock.

Carbon dioxide. Carbon dioxide (chemical formula CO2) is a naturally occurring chemical compound composed of 2 oxygen atoms each covalently double bonded to a single carbon atom. It is a gas at standard temperature and pressure and exists in Earth's atmosphere in this state, as a trace gas at a concentration of 0.039 per cent by volume.[1] The environmental effects of carbon dioxide are of significant interest. Atmospheric carbon dioxide is the primary source of carbon in life on Earth and its concentration in Earth's pre-industrial atmosphere since late in the Precambrian eon was regulated by photosynthetic organisms. Carbon dioxide is an important greenhouse gas; burning of carbon-based fuels since the industrial revolution has rapidly increased the concentration, leading to global warming.

It is also a major source of ocean acidification since it dissolves in water to form carbonic acid,[5] which is a weak acid as its ionization in water is incomplete. History. Photosynthesis. Schematic of photosynthesis in plants. The carbohydrates produced are stored in or used by the plant. Overall equation for the type of photosynthesis that occurs in plants Composite image showing the global distribution of photosynthesis, including both oceanic phytoplankton and terrestrial vegetation. Dark red and blue-green indicate regions of high photosynthetic activity in ocean and land respectively. Photosynthesis is a process used by plants and other organisms to convert light energy, normally from the sun, into chemical energy that can be later released to fuel the organisms' activities.