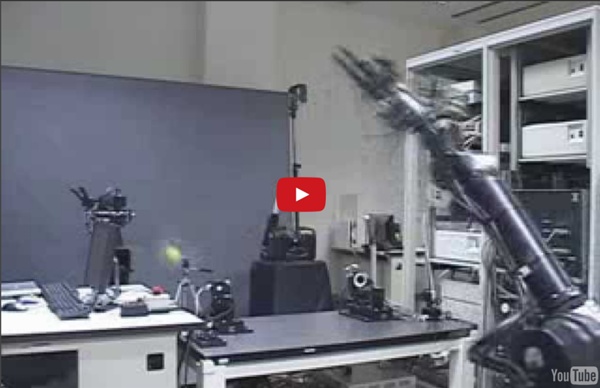 Ant executions serve a higher purpose, research shows Natural selection can be an agonizingly long process. Some organisms have a way of taking matters into their own hands, or—in the case of the ant species Cerapachys biroi—mandibles. Researchers at The Rockefeller University and Paris University have found that when a C. biroi ant steps out of line and attempts to lay eggs when it shouldn't, the other ants will drag it out of the nest and bite and sting it until it dies. And in a new study published this month in Current Biology, they believe they've discovered why. Rather than being a competitive behavior between ants over who gets to reproduce more, it appears the killing is a means of keeping the whole colony functioning properly. It's a mechanism, the researchers say, that parallels processes in other areas of biology, even inside a single individual—like when the body attacks cancer cells proliferating out of control.

Astronomers spy most distant Solar System object ever NASA/ESA/G. Bacon/STScI The Kuiper belt lies beyond Neptune. Astronomers have spotted the most distant object ever seen in the Solar System: a frigid world that currently lies 103 times farther from the Sun than Earth does. Robot bees designed to take over for declining bee populations in 2015. Photo by JOEL SAGET/AFP/GettyImages. Autonomous robot bugs sound like creatures from a sci-fi flick, but they could be a reality very soon. Scientists at the Universities of Sheffield and Sussex in England are designing the first electronic bees in hopes that they can "supplement or replace the shrinking population of honey bees that pollinate essential plant life," according to the tech blog io9. The Green Brain Project, as the effort is called, will upload real bees' senses of sight and smell into the tiny robots.

Total lunar eclipse of September 28, 2015 - online broadcasts schedule After more than 30 years a supermoon in combination with a lunar eclipse will be visible again across the skies of North and South America, Europe, Africa and parts of west Asia and the eastern Pacific. This rare celestial event is set for September 28 (UTC), 2015, and is expected to last for 1 hour and 11 minutes. For those who might find themselves to be unlucky with their location, weather conditions or light-polluted night skies, there is still hope, as many observatories will broadcast the event - live and free: NASA will broadcast the event from 00:00 UTC until at least 03:30 UTC, September 28, from Marshall Space Flight Center in Huntsville with a live feed from the Griffith Observatory, Los Angeles, Adler Planetarium, Chicago, Fernbank Observatory in Atlanta and other locations across the US.

One Per Cent: Cardboard cockroach ranks among world's fastest robots Sara Reardon, reporter Don't stomp on this little robot - not yet, anyway. VELOCIRoACH, a small cardboard hexapod modelled on a cockroach, can run at 2.7 metres per second, placing it among the fastest robots in the world. Boston Dynamics' LS3, which can trot at up to 3.2 m/s, still holds the speed record for a self-powered robot. VELOCIRoACH ties for second with the company's six-legged RHex. But VELOCIRoACH is by far the fastest for its size: in 1 second, it can skitter 26 times the length of its body.

Hawking: Mankind has 1,000 years to escape Earth Russia Today Renowned British physicist Stephen Hawking warns human beings won’t survive “without escaping” from the “fragile” planet. His gloomy forecast is people will become extinct on Earth within current the millennium. Speaking at the Cedars-Sinai Medical Center in Los Angeles the 71-year-old scientist called for further exploration of space to guarantee the future of mankind, the Belfast Telegraph reports. A fish that pushes in the wrong direction solves a mystery of animal locomotion 7-Nov-2013 [ Print | E-mail ] Share [ Close Window ] Contact: Tanya Klein 973-596-3433New Jersey Institute of Technology For nearly 20 years, Professor Eric Fortune has studied glass knifefish, a species of three-inch long electric fish that lives in the Amazon Basin. In his laboratory he tries to understand how their tiny brains control complex electrical behaviors.

[Link]: KIC 8462852, aka WTF star, "the most mysterious star in our galaxy", ETI candidate, etc. - Less Wrong Discussion KIC 8462852, or the WTF (Where's the Flux?) star, is an F-type main sequence star about 1,480 ly away. It's a little larger and more massive than the sun, and a few times brighter. Age is uncertain, but probably older rather than younger. Kepler observations over the last few years reveal very strange large and aperiodic flux variations (up to 20%) - of the general form predicted by some ETI megastructure models.

Robot able to swim, crawl and walk Salamandra robotica II is a last generation amphibious robot developed by the Biorobotics Laboratory at EPFL (École Polytechnique Fédérale de Lausanne). It is the guest of honor at the booth of Syrobo, the founder of Innorobo, which is the largest European exhibition of service robotics, and takes place in Lyon from 19 to 21 March 2013. Among the many robots inspired by natural designs, the Salamandra robotica II is the only one able to swim, crawl and walk—all by combining robotics, evolution and neurobiology. Share Video undefined A salamander's locomotion is controlled by neural circuits distributed along its spinal cord.

Is Time an Illusion? (Video) “Time has no independent existence apart from the order of events by which we measure it.” —Albert Einstein Surprising as it may be to most non-scientists and even to some scientists, Albert Einstein concluded in his later years that the past, present, and future all exist simultaneously. Scientists study some fishy behavior to solve an animal locomotion mystery Video: Stability, maneuverability in knifefish Related Articles Noah Cowan is taking an innovative approach to improving robotics We can't talk with the animals.

String Theory and the Scientific Method There’s a new philosophy of science book out, Richard Dawid’s String Theory and the Scientific Method (available online here if your institution is paying Cambridge University Press appropriately or if you have a credit card). It comes with endorsements from string theorists David Gross and John Schwarz, with Schwarz writing: Richard Dawid argues that string theory plays a novel role in the scientific process that has been neglected by philosophers of science. I believe that this book is a valuable contribution to the philosophy of science, which should interest practicing scientists as well as those who are more interested in the methodology of science. Dawid is a particle theorist turned philosopher, and as you might guess from the endorsement, he approaches string theory from an enthusiast’s point of view.

Robo-pets may contribute to quality of life for those with dementia Robotic animals can help to improve the quality of life for people with dementia, according to research. Companionable robots are enjoyable, interesting and can be used as an intervention to promote social interaction. Northumbria University’s Professor Glenda Cook has carried out ethnographic work in care homes in North East England introducing PARO – a robotic harp seal – to residents. Universe is Not Expanding After All, Scientists Say New evidence, based on detailed measurements of the size and brightness of hundreds of galaxies, indicates that the Universe is not expanding after all, says a team of astrophysicists led by Eric Lerner from Lawrenceville Plasma Physics. This image shows a star forming region in a nearby galaxy known as the Large Magellanic Cloud. Image credit: ESA / Hubble. In their study, the scientists tested one of the striking predictions of the Big Bang theory – that ordinary geometry does not work at great distances.