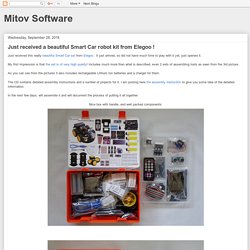 It just arrived, so did not have much time to play with it yet, just opened it. My first impression is that the set is of very high quality! Includes much more than what is described, even 2 sets of assembling tools as seen from the 3rd picture. As you can see from the pictures it also includes rechargeable Lithium Ion batteries and a charger for them. The CD contains detailed assembly instructions and a number of projects for it. In the next few days, will assemble it and will document the process of putting it all together. Nice box with handle, and well packed components: Included 2 sets of assembling tools: Everything came well wrapped: Robotic Vision. The aim of Robotic vision is to develop your skills and knowledge of the fundamental mathematics and algorithms that underpin computer vision, including how to interpret images to determine the size, shape and color of objects in the scene. 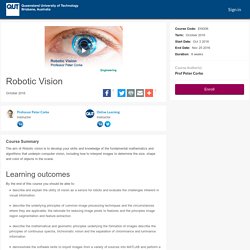 Learning outcomes. Are we ready to live with robots? “I am the robot, you are the human. 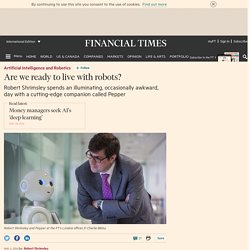 This is the beginning of a beautiful story. I like humans. Humans are so cute.” A Robot has been Teaching College Students For Several Months and No one Noticed It. Robotics has been the rising field in science with great advancements coming every day. 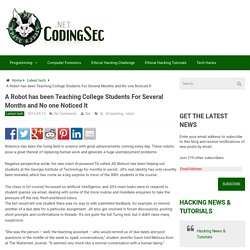 These robots pose a great thereat of replacing human work and generate a huge unemployment problems. Negative perspective aside, his new robot AI-powered TA called Jill Watson has been helping out students at the Georgia Institute of Technology for months in secret. Jill’s real identity has only recently been revealed, which has come as a big surprise to most of the 300+ students in the course. The class is (of course) focussed on artificial intelligence, and Jill’s main tasks were to respond to student queries via email, dealing with some of the more routine and mundane enquiries to take the pressure off the real, flesh-and-blood tutors.

The bot would tell one student there was no way to edit submitted feedback, for example, or remind another of a due date for a particular assignment. Ashok Goel, a professor of computer science at Georgia Tech, was responsible for ‘recruiting’ Jill. 16 free E-books to kickstart your Artificial Intelligence programming - Coding Security.

If you have been searching for AI books to help you with as good start then you have come to the right place these book covers the basics to high end stuff. 1. A Course in Machine Learning Machine learning is the study of computer systems that learn from data and experience. Johnny Five, Our One True Robot Hero, Might Soon Be an Official Lego Set. Archives. A Neural Network in 11 Lines of Python. ForArtificialIntelligence. This page attempts to collect information and links pertaining to the practice of AI and Machine Learning in python. 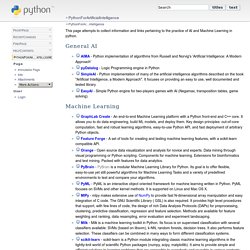 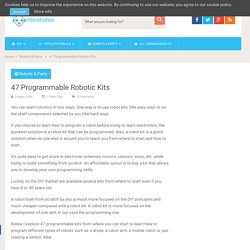 One way is to use robot kits (the easy way) or on the shelf components selected by you (the hard way). Asuro Programmable Robot Kit. Your order can be delivered to anywhere throughout Australia by either standard (road) freight or premium (express) delivery. 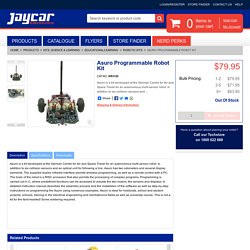 Delivery is calculated based on your cart dollar value. Standard/Road Freight: 2 - 5 working days* Delivery Charges: Premium/Express Freight: Next working day Metro Areas orders placed before 2.45pm, 2-3 days for other areas* *Freight delivery times stated are for average volume items with total order weight under 5kg for metro areas in eastern states. Delivery addresses • Goods cannot be delivered to a post office box via road or air courier service. Asuro Programmable Robot Kit. Robot kits, starter kits and robot systems. Robot kits to build - info.com.au. Elon Musk + Sam Altman Launch OpenAI Nonprofit That Will Use AI To "Benefit Humanity" Silicon Valley is in the midst of an artificial intelligence war, as giants like Facebook and Google attempt to outdo each other by deploying machine learning and AI to automate services. 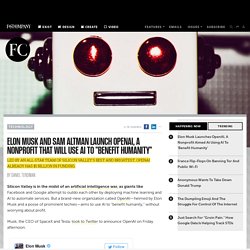 But a brand-new organization called OpenAI—helmed by Elon Musk and a posse of prominent techies—aims to use AI to "benefit humanity," without worrying about profit. Musk, the CEO of SpaceX and Tesla, took to Twitter to announce OpenAI on Friday afternoon. The organization, the formation of which has been in discussions for quite a while, came together in earnest over the last couple of months, co-chair and Y Combinator CEO Sam Altman told Fast Company.

It is launching with $1 billion in funding from the likes of Altman, Musk, LinkedIn founder Reid Hoffman, and Palantir chairman Peter Thiel. VertiGo wheeled robot isn't stopped by walls. Although they aren't as common as flying drones, we are seeing an increasing number of wall-climbing robots. 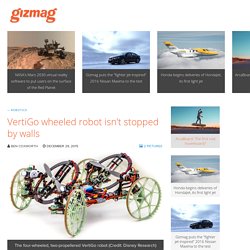 What isn't so common, however, are devices like the VertiGo, which both drives on the ground and climbs up walls. Its climbing ability is particularly impressive, as it can even tackle walls with rough, uneven surfaces. ?tag=nl. Robots aren't going to replace us, but by working hand in hand with us they will redefine what it means to be human. 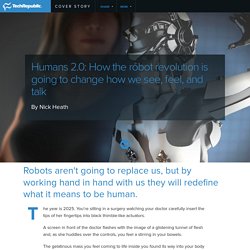 The year is 2025. You're sitting in a surgery watching your doctor carefully insert the tips of her fingertips into black thimble-like actuators. A screen in front of the doctor flashes with the image of a glistening tunnel of flesh and, as she huddles over the controls, you feel a stirring in your bowels. The gelatinous mass you feel coming to life inside you found its way into your body 24 hours earlier, when you swallowed a pill that looked unremarkable, save for its bulk.

That pill was actually a package of edible electronics, a miniature robot that will allow the doctor to feel inside your body without making a single incision. This is the coming world of augmented humans, where technology gifts people senses, skills, and strengths never before available. A psychologist thinks it'll be normal to have sex with robots by 2070.

Design Tool for 3D-Printable Robots from Disney Research. This video and white paper about a CAD program for creating a variety of 3D-printable robots, ready for on-screen gait testing and eventual printing, looks very impressive. The system was developed by Disney Research in partnership with Carnegie Mellon University. The program allows you to experiment with various shapes, sizes, number of legs, types of walking gait, and more for desired robotic designs. This unique drone can fly indefinitely and doesn’t need to land. If you’ve ever had a bit of a play with a consumer drone unit you’ll know that their power supplies don’t necessarily last all that long.

After spending some time in the air, you need to keep an eye on your device’s battery levels (in addition to watching out for trees) to make sure things don’t come to an abrupt, ground-smacking end. The PARC (Persistent Aerial Reconnaissance and Communications) from drone-maker CyPhy Works, doesn’t suffer that particular shortcoming, however. This uniquely powered drone can stay in the air indefinitely (although 100 hours is the maximum recommended operating time) thanks to its proprietary microfilament system, which is effectively a specialised power cord that extends from the ground to the airborne unit.

“It’s basically a robot with unlimited time-of-flight,” said Helen Greiner, the founder of CyPhy Works, speaking this week at the EmTech 2015 conference in Cambridge, Massachusetts, as reported by Will Knight at MIT Technology Review. DIY Laptop Controlled Robot. It would be so good if would be able to control a robot or your rc car using a laptop just like you control a car in a game. Well, it can be made possible using the versatile arduino UNO. There are thousands of projects you can make with arduino. Nicks Hobby Shop Sitemap. Meccanoid G15 KS brings Meccano into the robot age. Documentation > Education. USBDroid with onboard Android/USB Host- Jaycar Electronics.

MicroBrics managing director Brenton O’Brien says the robots will sell for $39 each or $30 each for a classroom of 30 once they enter into full production in December. “Edison is a low-cost, Lego-compatible programmable robot. And what makes it really impressive is the price point – existing Lego Technic robotics kits can cost around $500 each. Robotics. Aldebaran Robotics. NAOqi OS: A revolution in humanoid robotics. NAO: programmable robot, autonomous and interactive robot. SDK, Simple software for developing your NAO.