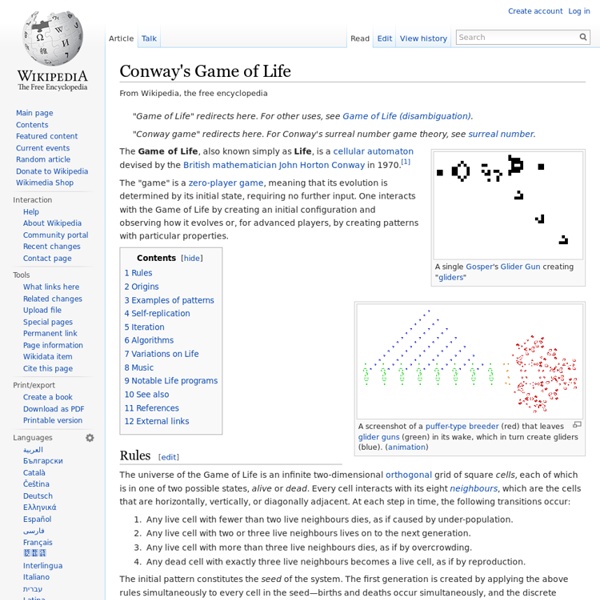 "Conway game" redirects here. For Conway's surreal number game theory, see surreal number. The Game of Life, also known simply as Life, is a cellular automaton devised by the British mathematician John Horton Conway in 1970.[1] The "game" is a zero-player game, meaning that its evolution is determined by its initial state, requiring no further input. One interacts with the Game of Life by creating an initial configuration and observing how it evolves or, for advanced players, by creating patterns with particular properties. Rules[edit] The universe of the Game of Life is an infinite two-dimensional orthogonal grid of square cells, each of which is in one of two possible states, alive or dead. The initial pattern constitutes the seed of the system. Origins[edit] The game made Conway instantly famous, but it also opened up a whole new field of mathematical research, the field of cellular automata ... Conway chose his rules carefully, after considerable experimentation, to meet these criteria:

PatternLanguage.com "The process itself is the actuality"Alfred North Whitehead There are no shortcuts to beautiful form. If you stand in front of the faucet of your kitchen sink and look at the beautiful shape of the drop of water you can realize that it forms slowly as gravity works on the tiny bit of water. Papers and Essays by Jakob Nielsen June 4, 2017 Typing a password takes twice as long on mobile than on desktop. Follow these 12 guidelines to make registration and login less painful on mobile devices. June 4, 2017 Modal ads, ads that reorganize content, and autoplaying video ads were among the most disliked.

The Myth Of AI That mythology, in turn, has spurred a reactionary, perpetual spasm from people who are horrified by what they hear. You'll have a figure say, "The computers will take over the Earth, but that's a good thing, because people had their chance and now we should give it to the machines." Then you'll have other people say, "Oh, that's horrible, we must stop these computers." Most recently, some of the most beloved and respected figures in the tech and science world, including Stephen Hawking and Elon Musk, have taken that position of: "Oh my God, these things are an existential threat. They must be stopped." In the past, all kinds of different figures have proposed that this kind of thing will happen, using different terminology.

“The sign-up sheets didn’t have a column for students”: Mark Yudof and the UC Regents = Sacramento One of the myths about the UC system crisis is the idea that “Sacramento” is the real villain, and that protesting the UC administration is a waste of time. The legislature is the actual problem, people say, because they‘re the ones who have allocated less money to the University system. Instead of occupying the Office of the President of the UC system, such people argue, students should really be protesting politicians in Sacramento.

Get That Out Of Your Mouth: Get That Out Of Your Mouth #34 Here's the scenario: the world hits "peak oil," and the supply starts to dwindle. All around the planet, gas prices go up and economies choke. From rich to poor, from the city to the country, everyone is affected by the scarcity of a resource that's as crucial as air. So who would you turn to? The scientists?

Like a Swarm of Lethal Bugs: The Most Terrifying Drone Video Yet - Conor Friedersdorf An Air Force simulation says researchers are at work on killer robots so tiny that a group of them could blend into a cityscape. Science writer John Horgan's feature on the many ways drones will be used in coming years is interesting throughout, and terrifying in the passage where he describes an effort to build micro-drones that are, as the U.S. Air Force describes them, "Unobtrusive, pervasive, and lethal." Air Force officials declined a request to observe flight tests at a "micro-aviary" they've built, he reported, but they did let him see a video dramatization "starring micro-UAVs that resemble winged, multi-legged bugs. The drones swarm through alleys, crawl across windowsills, and perch on power lines. One of them sneaks up on a scowling man holding a gun and shoots him in the head."

Ergodic hypothesis The ergodic hypothesis is often assumed in the statistical analysis of computational physics. The analyst would assume that the average of a process parameter over time and the average over the statistical ensemble are the same. This assumption that it is as good to simulate a system over a long time as it is to make many independent realizations of the same system is not always correct. (See, for example, the Fermi–Pasta–Ulam experiment of 1953.)

Bruxism Bruxism, also known as tooth grinding, is the excessive grinding of the teeth and/or excessive clenching of the jaw.[1] It is an oral parafunctional activity;[1] i.e., it is unrelated to normal function such as eating or talking. Bruxism is a common problem; reports of prevalence range from 8–31% in the general population.[2] Bruxism may cause minimal symptoms, and therefore people may not be aware of the condition. Several symptoms are commonly associated with bruxism, including hypersensitive teeth, aching jaw muscles, and headaches. Bruxism may cause tooth wear, and even damage or break teeth and dental restorations such as crowns and fillings.[3] There are two main types of bruxism: that which occurs during sleep (sleep bruxism) and that which occurs during wakefulness (awake bruxism). Classification[edit]

Serious Games For Lower-Consumption Practices Alternative Reality Serious Games challenging us to play a better future WWO:Generating a massively collaborative map of potential, citizen responses to oil shock; constructing a database of lower-consumption practices that might prevent that shock from happening World Without Oil - Serious Games and online social networking Chapter 3: Neotechnological conditioning Chapter 3 Neotechnological Conditioning – Jean-Marc Mandosio “Reaction against machine-culture. The machine, itself a product of the highest intellectual energies, sets in motion in those who serve it almost nothing but the lower, non-intellectual energies. It thereby releases a vast quantity of energy in general that would otherwise lie dormant, it is true; but it provides no instigation to enhancement, to improvement, to becoming an artist. It makes men active and uniform—but in the long run this engenders a counter-effect, a despairing boredom of soul, which teaches them to long for idleness in all its varieties” (Friedrich Nietzsche, Human, All Too Human, 1880).

Garden path sentence As a person reads a garden path sentence, the reader builds up a structure of meaning one word at a time. At some point, it becomes clear to the reader that the next word or phrase cannot be incorporated into the structure built up thus far; it is inconsistent with the path down which they have been led. Garden path sentences are less common in spoken communication because the prosodic qualities of speech (such as the stress and the tone of voice) often serve to resolve ambiguities in the written text.