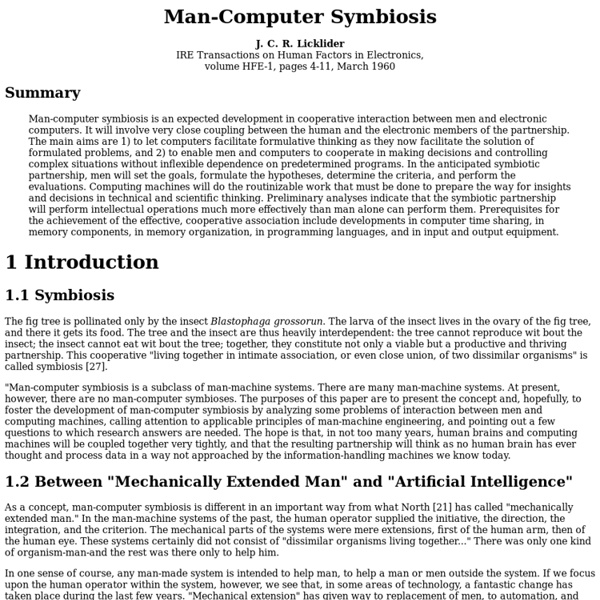 Man-Computer Symbiosis J. C. R. Licklider IRE Transactions on Human Factors in Electronics, volume HFE-1, pages 4-11, March 1960 Summary Man-computer symbiosis is an expected development in cooperative interaction between men and electronic computers. 1.1 Symbiosis The fig tree is pollinated only by the insect Blastophaga grossorun. "Man-computer symbiosis is a subclass of man-machine systems. 1.2 Between "Mechanically Extended Man" and "Artificial Intelligence" As a concept, man-computer symbiosis is different in an important way from what North [21] has called "mechanically extended man." In one sense of course, any man-made system is intended to help man, to help a man or men outside the system. Man-computer symbiosis is probably not the ultimate paradigm for complex technological systems. Present-day computers are designed primarily to solve preformulated problems or to process data according to predetermined procedures. The other main aim is closely related. 5.4 The Language Problem

Marvin Minsky's Home Page MIT Media Lab and MIT AI Lab Professor of Media Arts and Sciences, MIT Professor of E.E.C.S., M.I.Tminsky at media.mit.edu Abstracts Bibliography Biography People Marvin Minsky has made many contributions to AI, cognitive psychology, mathematics, computational linguistics, robotics, and optics. In recent years he has worked chiefly on imparting to machines the human capacity for commonsense reasoning. His conception of human intellectual structure and function is presented in two books: The Emotion Machine and The Society of Mind (which is also the title of the course he teaches at MIT). He received the BA and PhD in mathematics at Harvard (1950) and Princeton (1954).

Blastophaga Blastophaga is a wasp genus in the family Agaonidae (fig wasps) which pollinate figs or are otherwise associated with figs, a coevolutional relationship that has been developing for at least 80 million years. Pollinating fig wasps are specific to specific figs. The common fig Ficus carica is pollinated by Blastophaga psenes. The female (left) and male Blastophaga psenes References[edit] External links[edit]

Two AI Pioneers. Two Bizarre Suicides. What Really Happened? In December 1996, snarky geeks created a newsgroup in his honor, alt.mckinstry.pencil-dick, taking as its charter "Discussion of Usenet kook McKinstry, aka 'McChimp.'" Leading the brigade was Jorn Barger, who would later run the site Robot Wisdom (and coin the term weblog). "You write like a teenager, and have shown frequent signs of extreme cluelessness," Barger emailed McKinstry in May 1995. McKinstry never shied away from a flame war. "I'm just sick of you spouting your highly uninformed opinion all over the net," he replied to Barger.

Wiki:Schedule Missions Texts Main Syllabus Page Before the course starts: Get started on the texts a week or more in advance and try to stay at least a week ahead. Be sure to read, understand, and commit yourself to the missions and to participatory learning. ChalmersReply Comment on David Chalmers “The Singularity: A Philosophical Analysis” Journal of Consciousness Studies 19(1-2):119-125. 2012. By Robin Hanson, July 1, 2011. Abstract Chalmers is right: we should expect our civilization to, within centuries, have vastly increased mental capacities, surely in total and probably also for individual creatures and devices. We should also expect to see the conflicts he describes between creatures and devices with more versus less capacity.

Mind Amplifier: New TED ebook author asks whether digital media can make us smarter Are we becoming blank-eyed cyberzombies, thanks to the internet and all the tech tools we obsess about every day? Instead of asking whether the Web is making us stupid, Howard Rheingold turns that lens around and asks how digital media could actually improve our intelligence. In his new TED Book, Mind Amplifier: Can Our Digital Tools Make Us Smarter?, he examines the origins of digital mind-extending tools, and lays out the foundations for a smarter future. So how could this play out? We asked Rheingold to explain his theory. The Scientists Preparing for The Apocalypse The men were too absorbed in their work to notice my arrival at first. Three walls of the conference room held whiteboards densely filled with algebra and scribbled diagrams. One man jumped up to sketch another graph, and three colleagues crowded around to examine it more closely.

What Is a Book? - Alexis C. Madrigal BookTraces is a new project to track down the human markings in 19th-century books that, in the era of digitization, will (at best) end up in deep storage throughout the nation's library system. The books are "a massive, distributed archive of the history of reading, hidden in plain sight in the circulating collections," the site argues. "Marginalia, inscriptions, photos, original manuscripts, letters, drawings, and many other unique pieces of historical data can be found in individual copies...

Are Artificial Intelligence Doomsayers like Skeptical Theists? - h+ Media Some of you may have noticed my recently-published paper on existential risk and artificial intelligence. The paper offers a somewhat critical perspective on the recent trend for AI-doomsaying among people like Elon Musk, Stephen Hawking and Bill Gates. Of course, it doesn’t focus on their opinions; rather, it focuses on the work of the philosopher Nick Bostrom, who has written the most impressive analysis to date of the potential risks posed by superintelligent machines. I want to try and summarise the main points of that paper in this blog post. This summary comes with the usual caveat that the full version contains more detail and nuance.

Texting and Driving Statistics Texting And Distracted Driving Infograaphic Texting and Driving Statistics Texting while driving is a growing trend, and a national epidemic, quickly becoming one of the country’s top killers. Drivers assume they can handle texting while driving and remain safe, but the numbers don’t lie. A robot prepared for self-awareness: Expanded software architecture for walking robot Hector A year ago, researchers at Bielefeld University showed that their software endowed the walking robot Hector with a simple form of consciousness. Their new research goes a step further: they have now developed a software architecture that could enable Hector to see himself as others see him. "With this, he would have reflexive consciousness," explains Dr. Holk Cruse, professor at the Cluster of Excellence Cognitive Interaction Technology (CITEC) at Bielefeld University.

Could 'method writing' be the future for novelists? Image copyright AP Could writers benefit from the same tactics as method actors, who immerse themselves in extreme surroundings in order to prepare for a role? Every February, as the Oscars roll around, movie fans revel in stories about actors who have gone to extreme lengths to prepare for parts. Daniel Day-Lewis learned to track and skin animals and fight with tomahawks for The Last of the Mohicans, while, more recently, Leonardo DiCaprio plunged into an icy river and sank his teeth into a hunk of raw bison while filming the Oscar-nominated film The Revenant.