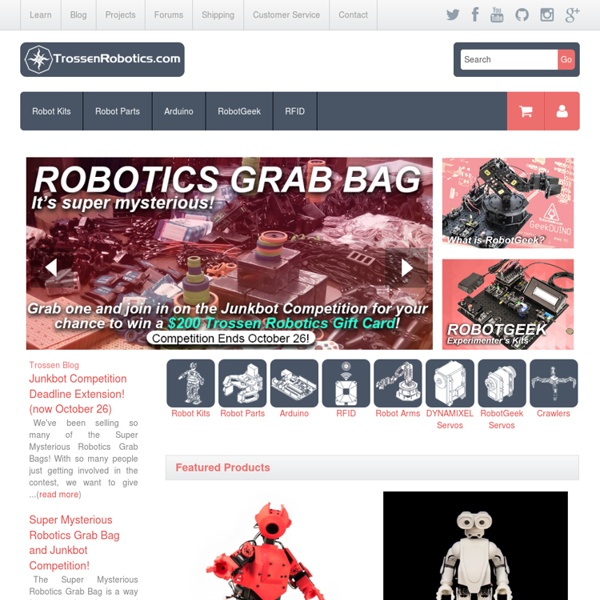 Trossen Customer Cassinelli Alvaro has just posted a video of his newest creation, the Toro-Bots. These robots have Japanese style lanterns affixed to the top of a PhantomX Quadrupeds. The cralwers allow the lanterns to become a dynamic part of a garden landscape. From the videos description, We propose here a garden that takes care of itself, that somehow understands and re-interprets the rules of harmony and equilibrium, and reconfigures itself depending on the season, the presence or absence of a human observers – that develops structure in a generative way, creating a dynamic conversation between the elements in the garden. Each lamp is programmed with a different behavior, giving it it’s own personality.

Video game console A video game console is a device that outputs a video signal to display a video game. The term "video game console" is used to distinguish a machine designed for consumers to use for playing video games on a separate television in contrast to arcade machines, handheld game consoles, or home computers. Although Ralph Baer had built working game consoles by 1966, it was nearly a decade before PONG made them commonplace in home theaters. Through evolution over the years, game consoles have expanded to function as CD players, DVD players, web browsers, set-top boxes and more. Finding Parts - Hobbyist / Surplus Sites The data on the "Finding Parts" pages is actually all in a Wiki (a webpage that anyone, even you, can edit!) If you have suggestions or ideas for other companies or sources you can post it in the forum but it might be faster and easier to just edit the wiki page yourself! (You'll have to make an account "Not the best, but still a good deal" This is not an exhaustive list, but these are my favorite surplus locations. Check in for specials, sales, and limited-quantity items. General Surplus parts and components

Rover 5 Robot Platform Description: If you're looking for a base for your next robot, look no further than the Rover 5. The Rover 5 uses 4 independent motors, each with an optical quadrature encoder and gearbox. The entire gearbox assembly can be rotated at 5 degree increments for different clearance configurations. You can even replace the tank treads with traditional wheels. Solution-VS1063 - MP3 / OGG / AAC / WMA / FLAC / G.711 / G.722 Audio Codec Circuit VS1063 is the newest VLSI Solution's MP3 slave processor family. As a first in VLSI's over decade long history of creating innovative audio IC products, VS1063 is as much aimed at encoding as it is at decoding audio. The VS1063 IC can encode an unforeseen multitude of audio formats, from MP3 and Ogg Vorbis to G.711 u-law, G.711 A-law, G.722 and 16-bit PCM. The proprietary MP3 encoder and Ogg Vorbis encoder have been carefully tuned for highest possible audio fidelity for high-quality audio streaming or recording. VS1063 can play back MP2, MP3, WMA, OGG, LC-AAC, HE-AAC, FLAC, IMA, G.711 u-law, G.711 a-law, G.722 and WAV PCM formats, making it very suitable for hi-fi audio playback and streaming applications.

Justin - Humanoid Robot Catches with Two Hands German researchers developed a robot that can perform complex tasks such as catching a ball in mid flight. The new robot called “Justin” is described as a two-arm-system for investigation of two handed manipulation. The development of humanoid robots has made significant progress in recent years. Although several systems have impressive walking abilities, when it comes to their abilities to manipulate objects or interact with their surrounding they are quite limited. To overcome this limitation, researchers from the German Aerospace Center (DLR) Institute of Robotics and Mathematics developed a human-like torso with two arms and two hands. Justin is used to test programming and control concepts for two-handed mobile manipulation, and in a recent demonstration was able to show impressive abilities including catching two balls in mid air just like a skilled human would do.

Marvel’s Jessica Jones and Gamergate: How the Netflix series absorbed the anxieties of the online movement. Photo by Myles Aronowitz/Netflix Marvel’s Netflix series Jessica Jones is many things. It’s possibly the biggest surprise spotlight grab by a B- or even C-list comic book character since Guardians of the Galaxy. It’s one of the grimmest, darkest, boldest shows out there: a TV show that’s essentially 13 hours of PTSD related to the aftermath of sexual assault. This is even more remarkable in light of the fact that the show is part of the Marvel Cinematic Universe, that Jessica Jones’ graphic sex scenes and shivering junkies and dour musings on futility coexist in the same world as the massive alien invasion of The Avengers or the wacky heist in Ant-Man.

Open Source Kits Welcome to the Daisy mp3 project page! Here you will find everything you need to make the Daisy mp3 player. All the source files, hex files, EAGLE cad files, and documents are here. This is the official Make: mp3 player available here or at the Make: store. » DARPA “Emergency Response” Robot Runs Faster Than Usain Bolt Alex Jones Machines to be used for “defense missions” Paul Joseph Watson Infowars.com Thursday, September 6, 2012 One of the robots under development by DARPA for the purpose of “emergency response” and humanitarian missions has beaten the human world speed record set in 2009 by athlete Usain Bolt. “The Defense Advanced Research Project’s (DARPA) Cheetah managed to reach 28.3 mph, said the agency on Sept. 5. We Don’t Need Supergirl OR Jessica Jones. We Need Both. On Friday, Netflix launched its full, first season of the much-hyped Jessica Jones; so far, reactions have been mostly positive from critics and fans alike. And there’s a lot about the show to appreciate, from its unflinching depiction of characters who have overcome past trauma and assault to strong female friendships. Jessica Jones is responsible for many firsts in the Marvel Cinematic Universe, and that’s something we should absolutely keep talking about. But Jessica Jones isn’t the first television series to feature a female superhero in the titular role; CBS’s Supergirl premiered last month to its own positive reviews, and has been praised for much of the same reasons as Jessica Jones—its representation of powerful women, or its promotion of an unapologetically feminist message. Tonally, the shows couldn’t be more different—Supergirl is notably lighter, not just in overall genre but in the way the show itself looks.