Association for the Advancement of Artificial Intelligence 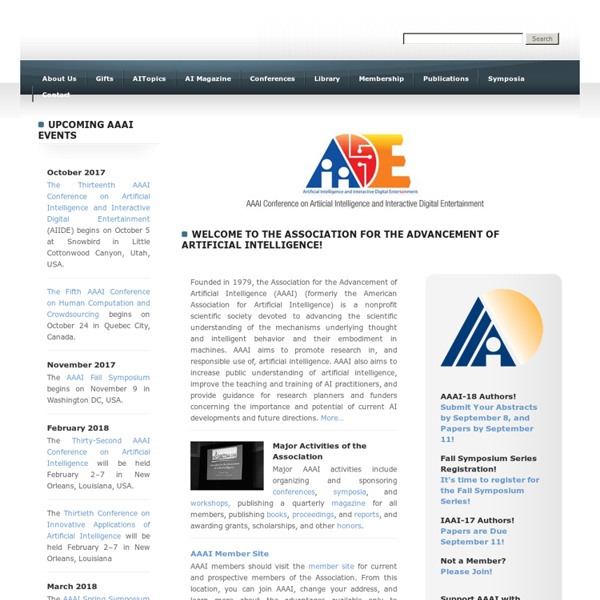 Founded in 1979, the Association for the Advancement of Artificial Intelligence (AAAI) (formerly the American Association for Artificial Intelligence) is a nonprofit scientific society devoted to advancing the scientific understanding of the mechanisms underlying thought and intelligent behavior and their embodiment in machines. AAAI aims to promote research in, and responsible use of, artificial intelligence. AAAI also aims to increase public understanding of artificial intelligence, improve the teaching and training of AI practitioners, and provide guidance for research planners and funders concerning the importance and potential of current AI developments and future directions. More… Major Activities of the Association Major AAAI activities include organizing and sponsoring conferences, symposia, and workshops, publishing a quarterly magazine for all members, publishing books, proceedings, and reports, and awarding grants, scholarships, and other honors.

The Hut Where the Internet Began - Alexis C. Madrigal When Douglas Engelbart read a Vannevar Bush essay on a Philippine island in the aftermath of World War II, he found the conceptual space to imagine what would become our Internet. Let's start at the end point: what you're doing right now. You are pulling information from a network onto a screen, enhancing your embodied experience with a communication web filled with people and machines. You do this by pointing and clicking, tapping a few commands, organizing your thoughts into symbols that can be read and improved by your various correspondents. There was a beginning to all this, long before it became technically possible. Chapter 3: Neotechnological conditioning Chapter 3 Neotechnological Conditioning – Jean-Marc Mandosio “Reaction against machine-culture. The machine, itself a product of the highest intellectual energies, sets in motion in those who serve it almost nothing but the lower, non-intellectual energies.

Work Systems Design & Evaluation Work systems design and evaluation addresses how to optimize the combined performance of human experts and the supporting information system. WSDE includes all aspects of human-machine integration: human with software, human with hardware, and human with human, as well as aspects of machine-machine interaction insofar as it impacts total human-system performance. Lunar Surface Systems The WSDE has participated in a series of Exploration Systems Mission Directorate (ESMD) Bluesky workshops over the past two years devoted to developing operations concepts and designs for a small pressurized lunar electric rover (LER). The goal of this meeting was to “visualize innovative LER displays and controls that handle information and activities in a connected manner.”

MegaBots Inc - YouTube MegaBots Season 1 Trailer 295,532 views 1 month ago Team USA is BACK and it's getting ready to take on Team Japan in the world's first Giant Robot Duel! Subscribe to this channel to see the Duel, and watch as MegaBots prepares for the Giant Robot Duel by: destructively testing the Mk2, working with specialists like Howe & Howe Technologies and IHMC Robotics, studying human physiology and combat techniques, testing ludicrously large and powerful giant robot weapons, and generally designing, building, and testing the world's largest (16 ft tall), heaviest (10-ton), and most expensive ($2.5M) sports combat robot. Stay tuned for our first episode, which drops September 28th!

Will Humans Still Be Humans in an Age of Artificial Intelligence? - Megan Garber Almost as soon as it arrived as a concept, artificial intelligence has occupied a hefty portion of humans' technological anxieties. We worry about machines taking over our jobs (and/or our emotions, and/or our lives). Even as we appreciate the ease that AI has brought to our lives -- the commercial recommendations that recognize our desires, the language processing that understands our curiosities, the information indexing that satisfies them -- we have been conditioned to be suspicious of intelligence that doesn't come in the form most familiar to us: the folds of an organic brain. But what happens 10 or 20 or 50 years down the road, when artificial intelligence has expanded its capabilities -- and, presumably, its role in our lives? What will that mean for humans, as a culture and as a species?

How to Understand Everything (and why) — Metamodern Too much to know, lots to know about In science and technology, there is a broad and integrative kind of knowledge that can be learned, but isn’t taught. It’s important, though, because it makes creative work more productive and makes costly blunders less likely. Fibonacci Number The Fibonacci numbers are the sequence of numbers defined by the linear recurrence equation with . As a result of the definition (1), it is conventional to define The Fibonacci numbers for Robotics - Lockheed Martin In the field of robotics, opportunity is endless and discovery is ongoing. Our robotic innovations could represent the answer to any number of challenges – from disaster response to deep space exploration. Whether it’s traversing inhospitable environments or avoiding man-made threats, the robotic advances we’re pioneering have the potential to keep soldiers and citizens connected in the safest way possible – with real-time data, information and imagery. Our goal is to keep soldiers and citizens safe.

Semantic Web I have an idea that I think is very important but I haven’t yet polished to the point where I’m comfortable sharing it. I’m going to share it anyway, unpolished, because I think it’s that useful. So here I am, handing you a dull, gray stone, and I’m saying there’s a diamond inside. Maybe even a dilithium crystal. My hope is that a few experts will see what I see and help me safely extract it. Or maybe someone has already extracted it, and they can just show me.

Like a Swarm of Lethal Bugs: The Most Terrifying Drone Video Yet - Conor Friedersdorf An Air Force simulation says researchers are at work on killer robots so tiny that a group of them could blend into a cityscape. Science writer John Horgan's feature on the many ways drones will be used in coming years is interesting throughout, and terrifying in the passage where he describes an effort to build micro-drones that are, as the U.S. Air Force describes them, "Unobtrusive, pervasive, and lethal." Air Force officials declined a request to observe flight tests at a "micro-aviary" they've built, he reported, but they did let him see a video dramatization "starring micro-UAVs that resemble winged, multi-legged bugs.