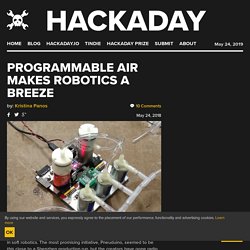 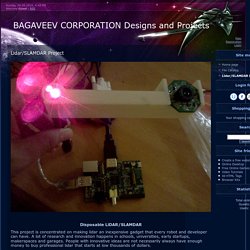 A lot of research and innovation happens in schools, universities, early startups, makerspaces and garages. People with innovative ideas are not necessarily always have enough money to buy professional lidar that starts at low thousands of dollars. Successful Kickstarter campaign has shown amount of interest in the inexpensive LiDAR as a product. SLAMDAR is an extension to a project that incorporates computer with mapping software, IMU (Inertial Measurement Unit) and lidar. Unlike multitude of robots that have custom solution for a lidar, mapping software and a computer, we believe map-building should be a buy-off the-shelf capability that you can plug into your flight/drive computer or use an internal computer of a SLAMDAR as brains for your robot.

Soft Robot Design with Biomimetics. What soft robots lack in hard strength and precision, they make up for with their gentle dexterity handling delicate objects, or their ability to go places other robots cannot reach. 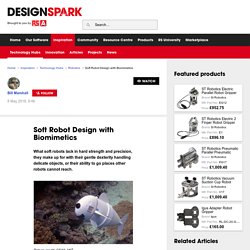 Picture credit: CSAIL MIT Soft Robots and Cobots Back in 2013, I wrote an article for DesignSpark entitled Soft Humans, Hard Robots which introduced the concept of ‘soft robotics’, a new area of research which was rapidly becoming mainstream. Maker Lab - Barc, the Robot Dog. Content on this site may contain or be subject to specific guidelines or limitations on use. 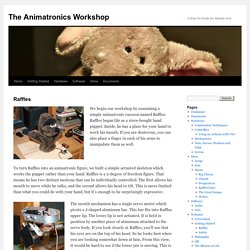 Raffles began life as a store-bought hand puppet. Inside, he has a place for your hand to work his mouth. If you are dexterous, you can also place a finger in each of his arms to manipulate them as well. To turn Raffles into an animatronic figure, we built a simple actuated skeleton which works the puppet rather than your hand. Xyzbot. Churchill Creations. Welcome to our animatronics page. 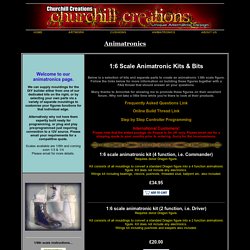 We can supply mouldings for the DIY builder either from one of our dedicated kits on the right, or by selecting your own parts via a variety of separate mouldings to customise your figures functions for that individual edge. Alternatively why not have them expertly built ready for programming, or plug and play pre-programmed just requiring connection to a 12V source. Please email your requirements for a competitive quote. Scales available are 1/6th and coming soon 1/3 & 1/4 Please email for more details. 1:6 Scale Animatronic Kits & Bits Below is a selection of kits and separate parts to create an animatronic 1:6th scale figure. Open Animatronics Kit - Creature Head from madhephaestus on Tindie.

Makeblock. VEX Robotics. Turning a Raspberry Pi into a portable streaming camera. LittleArm, a Small 3D Printed Robot Arm. If you’re a good (or even beginning) programmer, you might want to experiment with robotics. 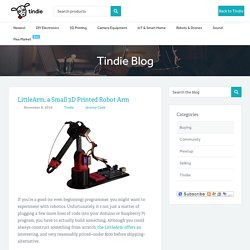 Unfortunately, it’s not just a matter of plugging a few more lines of code into your Arduino or Raspberry Pi program, you have to actually build something. Although you could always construct something from scratch, the LittleArm offers an interesting, and very reasonably priced–under $100 before shipping–alternative. As mentioned in the title, this arm is 3D printed, and the gripper is interchangeable so you can customize it as you see fit. Programming is done via desktop software that you can use to set movement waypoints. You can reprogram the included Arduino Uno board, which comes loaded with LittleArm firmware. Pony Bot. Working on the code for walking, I managed to somehow damage the ESP-12 module I was using -- it would get in a boot loop, and refuse getting into the right boot mode even with the GPIO2 held down. 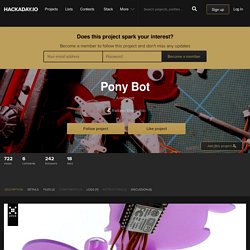 After checking everything, I removed the board from the robot, checked everything once more, made a couple of measurements with the multimeter to make sure there are no shorts or breaks, and, running out of ideas, left it there for some time. Then I tried once more time, and it worked this time -- I could flash it again. NodeMCU ESP8266 Mini-bot controlled from Scratch – Cymplecy (Simplesi) PSoC 4: Measuring Distance with HCSR-04 and CY8CKIT-049 4200. With Arduino, this is no big deal, right ? 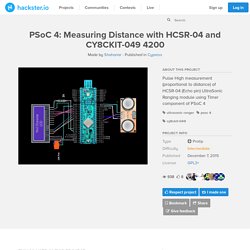 Just digitalWrite "high" the trigger pin for a few micro second then pulseIn the echo pin to measure the pulse duration in time, convert that time to distance ! How do you do that in PSoC 4 ? Do some math to get the time and print on the LCD ! So How does it work ? The Trigger (also the LED pin for a short BLUE flash) named Output Pin of PSoC, which is connected to the Trigger Input of the the Ultrasonic Module, is made HIGH for 10 microsecond on every 500 millisecond to Trigger the Module for sending ultrasonic waves. ESP8266 and Wii Nunchuck:WiFi Remote Control Smart Car Robot. Smart Car sets when combined with L298N Motor Driver Modules, offer one of the easiest ways to make robot cars. 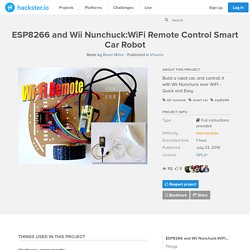 I already made an Tutorial on how you can control Smart Car with Arduino and Joystick. It is more interesting however if we can control the Car remotely. The ESP8266 modules are great low cost stand alone controllers with built in Wi-Fi, and are well fit for remotely controlling the robot car. Electrical Electronic And Programming News. Latest Examples Tables are useful items to have and as we needed a new coffee table for the lounge it made sense to build my own Read More Customers.

Swestey added: Robot MarketPlace - Motors. Stepper robot arm by Bajdi. "In theory, theory and practice are the same. In practice, they’re not." – Yoggi Berra. Arduino Wifly Mini. BoosterBot - Turn your LaunchPad into a Robot! from HylianSavior on Tindie. New Gloves Could Let You Feel In Virtual Reality. Let's Make Robots! How to Create a Pneumatic System for (F.I.R.S.T) Robots.

Bentley Advanced MaterialsBentley Advanced Materials. Air-Powered Soft Robotic Gripper. Update (1/24/2014): Important note about 3D printer materials added below. Read before you try this project! Update (11/22/2013): MUCH cheaper option added to the materials list to replace the squeeze bulbs. Thanks to the education staff at the Franklin Institute in Philadelphia, PA for pointing that out! Update (4/23/2013): smaller, cheaper "mini" gripper STL file has been added. How To Build A Soft Robot Hand. In the field of soft robotics, engineers use squishy materials to make robots durable, flexible, and safer to operate around humans. Soft Robotics Toolkit. Soft robotics ‘toolkit’ features everything a robot-maker needs.

Do it yourself. (Photo by Eliza Grinnell, Harvard SEAS.) Cambridge, Mass. – September 19, 2014 – A new resource unveiled today by researchers from several Harvard University labs in collaboration with Trinity College Dublin provides both experienced and aspiring researchers with the intellectual raw materials needed to design, build, and operate robots made from soft, flexible materials. With the advent of low-cost 3D printing, laser cutters, and other advances in manufacturing technology, soft robotics is emerging as an increasingly important field. Using principles drawn from conventional rigid robot design, but working with pliable materials, engineers are pioneering the use of soft robotics for assisting in a wide variety of tasks such as physical therapy, minimally invasive surgery, and search-and-rescue operations in dangerous environments.