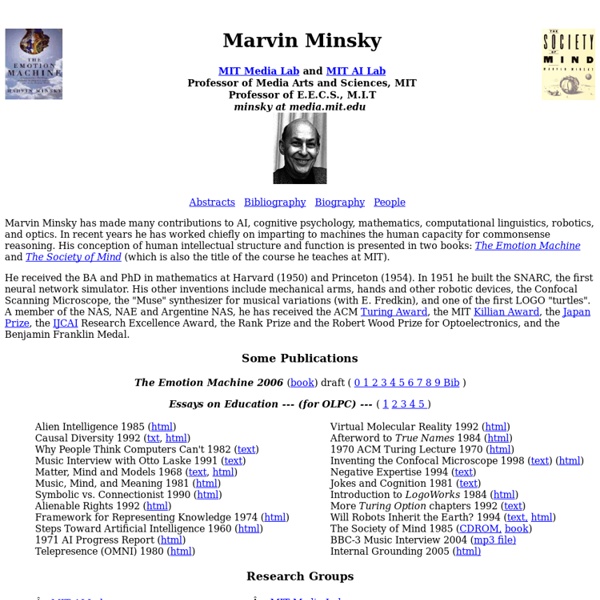 MIT Media Lab and MIT AI Lab Professor of Media Arts and Sciences, MIT Professor of E.E.C.S., M.I.Tminsky at media.mit.edu Abstracts Bibliography Biography People Marvin Minsky has made many contributions to AI, cognitive psychology, mathematics, computational linguistics, robotics, and optics. In recent years he has worked chiefly on imparting to machines the human capacity for commonsense reasoning. His conception of human intellectual structure and function is presented in two books: The Emotion Machine and The Society of Mind (which is also the title of the course he teaches at MIT). He received the BA and PhD in mathematics at Harvard (1950) and Princeton (1954). Some Publications The Emotion Machine 2006 (book) draft ( 0 1 2 3 4 5 6 7 8 9 Bib ) Essays on Education --- (for OLPC) --- ( 1 2 3 4 5 ) Research Groups Family Related:  Cogniticiens, informaticiens, anthropologues (L-Z) • A I / Robotics et al. • Reads

Society of Mind Minsky's model[edit] In a step-by-step process, Minsky constructs a model of human intelligence which is built up from the interactions of simple parts called agents, which are themselves mindless. He describes the postulated interactions as constituting a "society of mind", hence the title. The book[edit] The book, published in 1988, was the first comprehensive description of Minsky's "society of mind" theory, which he began developing in the early 1970s. The book was not written to prove anything specific about AI or cognitive science, and does not reference physical brain structures. The theory[edit] Minsky first started developing the theory with Seymour Papert in the early 1970s. Nature of mind[edit] A core tenet of Minsky's philosophy is that "minds are what brains do". This idea is perhaps best summarized by the following quote: What magical trick makes us intelligent? See also[edit] References[edit] Minsky, Marvin. External links[edit] MIT article, Examining the Society of Mind

Two AI Pioneers. Two Bizarre Suicides. What Really Happened? In December 1996, snarky geeks created a newsgroup in his honor, alt.mckinstry.pencil-dick, taking as its charter "Discussion of Usenet kook McKinstry, aka 'McChimp.'" Leading the brigade was Jorn Barger, who would later run the site Robot Wisdom (and coin the term weblog). "You write like a teenager, and have shown frequent signs of extreme cluelessness," Barger emailed McKinstry in May 1995. McKinstry never shied away from a flame war. "I'm just sick of you spouting your highly uninformed opinion all over the net," he replied to Barger. But some of McKinstry's improbable boasts turned out to be true. The eccentric researcher made friends among the bohemians and hackers of Santiago. "Yes, it is possible," Minsky is supposed to have replied, "but the training corpus would have to be enormous." That was apparently all the encouragement McKinstry needed. On July 6, 2000, McKinstry retooled his pitch for a collaborative AI database. The criticisms and flames never let up.

Man-Computer SymbiosisJ. C. R. Licklider The Most Useless Machine EVER! Also known as The Ultimate Machine: Claude E. Shannon built the first one based on an idea by Marvin Minsky. After seeing a video of such a machine I just had to have one of my own. The only design I could find uses a PIC microcontroller but I consider this to be overkill (not knowing how to write code for micros may have had some influence on my humble opinion...). Additionally, the microcontroller version really doesn't shut itself off. Knowing a little bit about servos and basic electronics, I felt sure that I could build the machine using a simple analog circuit. My main goal however was to have the machine REALLY turn itself off. The machine in THIS instructable accomplishes that!

Jean Malaurie - Accueil Man-Computer Symbiosis Man-Computer Symbiosis J. C. R. Licklider IRE Transactions on Human Factors in Electronics, volume HFE-1, pages 4-11, March 1960 Summary Man-computer symbiosis is an expected development in cooperative interaction between men and electronic computers. 1.1 Symbiosis The fig tree is pollinated only by the insect Blastophaga grossorun. "Man-computer symbiosis is a subclass of man-machine systems. 1.2 Between "Mechanically Extended Man" and "Artificial Intelligence" As a concept, man-computer symbiosis is different in an important way from what North [21] has called "mechanically extended man." In one sense of course, any man-made system is intended to help man, to help a man or men outside the system. Man-computer symbiosis is probably not the ultimate paradigm for complex technological systems. Present-day computers are designed primarily to solve preformulated problems or to process data according to predetermined procedures. The other main aim is closely related. 5.4 The Language Problem

Twubblesome Twelve 1974 - 1976 Took a course or two from Bob Floyd at Stanford, then gave one. 1961 - 1965 BS in Mathematics, MIT. 1963 - 1972 Technology Model Railroad Club. Where I learned the most. *2001 "Experiments and discoveries in q-Trigonometry" in proceedings of 2000 U. Florida (Gainesville) conference: Symbolic Computation, Number Theory, Special Functions, Physics & Combinatorics, (Garvan & Ismail, eds.) pp79-106. *1999 Website: www.tweedledum.com/rwg/index.htm (plus various unindexed pages). *1998 Invited talk, Mt. *1998-2000 As a result of significant q-series and q-product performance enhancements I gave to Prof Sergey Suslov at Arizona State, he got so excited that he listed me as a co-author at least twice. *1996 (Pub 1997) Invited talk ("How I find funny looking formulas") Fields Institute Conference (U. *1993 Paper (with Ismail and Zhang): On some strange summation formulas, Illinois Journal of Mathematics, Vol 37 #2. *June 1989 Invited speaker, MIT Computers in Mathematics Conference.

Human echolocation Human echolocation is the ability of humans to detect objects in their environment by sensing echoes from those objects, by actively creating sounds – for example, by tapping their canes, lightly stomping their foot, snapping their fingers, or making clicking noises with their mouths – people trained to orient by echolocation can interpret the sound waves reflected by nearby objects, accurately identifying their location and size. This ability is used by some blind people for acoustic wayfinding, or navigating within their environment using auditory rather than visual cues. It is similar in principle to active sonar and to animal echolocation, which is employed by bats, dolphins and toothed whales to find prey. Background[edit] Mechanics[edit] By understanding the interrelationships of these qualities, much can be perceived about the nature of an object or multiple objects. Neural substrates of echolocation in the blind[edit] Notable individuals who employ echolocation[edit] Dr. Dr.

ChalmersReply Comment on David Chalmers “The Singularity: A Philosophical Analysis” Journal of Consciousness Studies 19(1-2):119-125. 2012. By Robin Hanson, July 1, 2011. Abstract Chalmers is right: we should expect our civilization to, within centuries, have vastly increased mental capacities, surely in total and probably also for individual creatures and devices. We should also expect to see the conflicts he describes between creatures and devices with more versus less capacity. Introduction David Chalmers says academia neglects the huge potential of an intelligence explosion: An intelligence explosion has enormous potential benefits: a cure for all known diseases, an end to poverty, extraordinary scientific advances, and much more. Apparently trying to avoid describing the scenario that interests him in too much speculative detail, Chalmers goes far in the other direction, offering rather weak descriptions of his key scenario and the issues that concern him about it. Expect Growth Chalmers’ Scenario