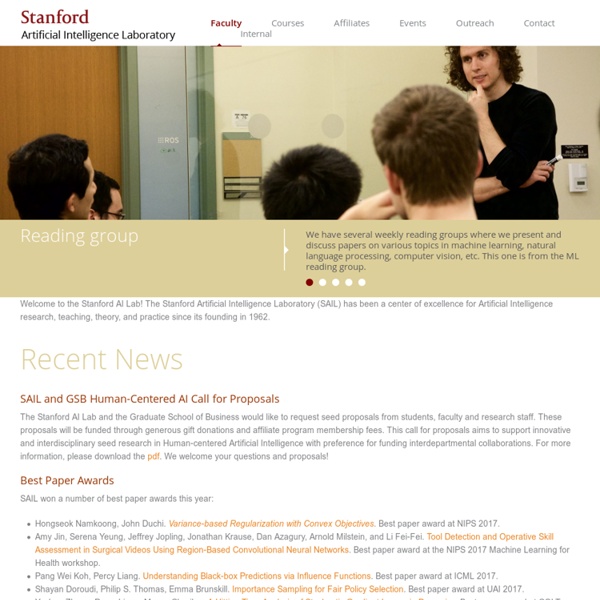 Chapter 3: Neotechnological conditioning Chapter 3 Neotechnological Conditioning – Jean-Marc Mandosio “Reaction against machine-culture. The machine, itself a product of the highest intellectual energies, sets in motion in those who serve it almost nothing but the lower, non-intellectual energies. 'Mind reading' brain scans reveal secrets of human vision Courtesy of Fei-Fei Li Researchers were able to determine that study participants were looking at this street scene even when the participants were only looking at the outline. Researchers call it mind reading. One at a time, they show a volunteer – who's resting in an MRI scanner – a series of photos of beaches, city streets, forests, highways, mountains and offices. The subject looks at the photos, but says nothing.

Ray Kurzweil’s How to Create a Mind to be published Nov. 13 Ray Kurzweil’s next book — How to Create a Mind: The Secret of Human Thought Revealed* — will be published Nov. 13, Viking announced today. It can now be pre-ordered. In the book, Kurzweil explores the most important science project since the human genome: reverse-engineering the brain to understand precisely how it works, then applying that knowledge to create vastly intelligent machines. Drawing on the most recent neuroscience research, compelling thought experiments, and his own research and inventions in artificial intelligence, he describes his new theory of how the neocortex (the thinking part of the brain) works: as a self-organizing hierarchical system of pattern recognizers.

How to Understand Everything (and why) — Metamodern Too much to know, lots to know about In science and technology, there is a broad and integrative kind of knowledge that can be learned, but isn’t taught. It’s important, though, because it makes creative work more productive and makes costly blunders less likely. Collective intelligence: Ants and brain's neurons CONTACT: Stanford University News Service (415) 723-2558 Collective intelligence: Ants and brain's neurons STANFORD - An individual ant is not very bright, but ants in a colony, operating as a collective, do remarkable things. A single neuron in the human brain can respond only to what the neurons connected to it are doing, but all of them together can be Immanuel Kant. That resemblance is why Deborah M.

Rethinking artificial intelligence The field of artificial-intelligence research (AI), founded more than 50 years ago, seems to many researchers to have spent much of that time wandering in the wilderness, swapping hugely ambitious goals for a relatively modest set of actual accomplishments. Now, some of the pioneers of the field, joined by later generations of thinkers, are gearing up for a massive “do-over” of the whole idea. This time, they are determined to get it right — and, with the advantages of hindsight, experience, the rapid growth of new technologies and insights from the new field of computational neuroscience, they think they have a good shot at it. Like a Swarm of Lethal Bugs: The Most Terrifying Drone Video Yet - Conor Friedersdorf An Air Force simulation says researchers are at work on killer robots so tiny that a group of them could blend into a cityscape. Science writer John Horgan's feature on the many ways drones will be used in coming years is interesting throughout, and terrifying in the passage where he describes an effort to build micro-drones that are, as the U.S. Air Force describes them, "Unobtrusive, pervasive, and lethal." Air Force officials declined a request to observe flight tests at a "micro-aviary" they've built, he reported, but they did let him see a video dramatization "starring micro-UAVs that resemble winged, multi-legged bugs.

I.B.M. Announces Brainy Computer Chip Since the early days in the 1940s, computers have routinely been described as “brains” — giant brains or mathematical brains or electronic brains. Scientists and engineers often cringed at the distorting simplification, but the popular label stuck. IBMDharmendra Modha, an I.B.M. researcher, is the leader of the project to create cognitive computer chips. Wait long enough, it seems, and science catches up with the metaphor. The field of “cognitive computing” is making enough progress that the brain analogy is becoming more apt. I.B.M. researchers are announcing on Thursday two working prototype cognitive computer chips.

Brains in Silicon Welcome to Brains in Silicon. Learn about the lab, get to know the brains that work here, and find out about new projects that you could join. We have crafted two complementary objectives: To use existing knowledge of brain function in designing an affordable supercomputer—one that can itself serve as a tool to investigate brain function—feeding back and contributing to a fundamental, biological understanding of how the brain works. Computational humor It is a relatively new area, with the first dedicated conference organized in 1996.[1] Joke generators[edit] Pun generation[edit] An approach to analysis of humor is classification of jokes. A further step is an attempt to generate jokes basing on the rules that underlie classification. Q: What is the difference between leaves and a car?

Man-Computer Symbiosis Man-Computer Symbiosis J. C. R. Licklider IRE Transactions on Human Factors in Electronics, volume HFE-1, pages 4-11, March 1960 Stanford University Stanford University (officially Leland Stanford Junior University) is a private research university in Stanford, California, and one of the world's most prestigious institutions,[8][9][10][11] with the top position in numerous surveys and measures in the United States.[12][13][14][15][16][17][18] Stanford was founded in 1885 by Leland Stanford, former governor of and U.S. senator from California and leading railroad tycoon, and his wife, Jane Lathrop Stanford, in memory of their only child, Leland Stanford, Jr., who had died of typhoid fever at age 15 the previous year. Stanford was opened on October 1, 1891[2][3] as a coeducational and non-denominational institution. Stanford is located in northern Silicon Valley near Palo Alto, California.