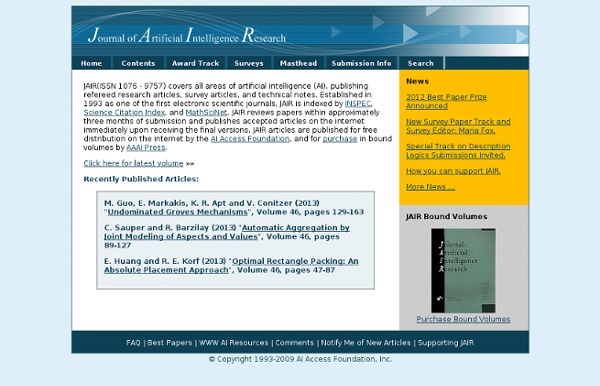 Association for the Advancement of Artificial Intelligence Artificial Intelligence Artificial Intelligence (AI) is the study of how computer systems can simulate intelligent processes such as learning, reasoning, and understanding symbolic information in context. AI is inherently a multi-disciplinary field. Although it is most commonly viewed as a subfield of computer science, and draws upon work in algorithms, databases, and theoretical computer science, AI also has close connections to the neurosciences, cognitive science and cognitive psychology, mathematical logic, and engineering. IBM has been a leader in AI since AI's earliest days, when Arthur Samuels (in the 1950s) developed an expert checkers-playing program that learned from experience. Forty years later, IBM Research's chess-playing program Deep Blue made history by beating world chess champion Gary Kasparov. AI Research at IBM goes far beyond game-playing programs and is at the forefront of many of the hottest areas of Artificial Intelligence. Projects Agent Building and Learning Environment Personal Wizards

How to Understand Everything (and why) — Metamodern Too much to know, lots to know about In science and technology, there is a broad and integrative kind of knowledge that can be learned, but isn’t taught. It’s important, though, because it makes creative work more productive and makes costly blunders less likely. Formal education in science and engineering centers on teaching facts and problem-solving skills in a series of narrow topics. It is true that a few topics, although narrow in content, have such broad application that they are themselves integrative: These include (at a bare minimum) substantial chunks of mathematics and the basics of classical mechanics and electromagnetism, with the basics of thermodynamics and quantum mechanics close behind. Most subjects in science and engineering, however, are narrower than these, and advanced education means deeper and narrower education. What are the physical phenomena? And even more fundamental than these are questions of knowledge about knowledge: What is known today? See also:

Stanford Artificial Intelligence Laboratory Chapter 3: Neotechnological conditioning Chapter 3 Neotechnological Conditioning – Jean-Marc Mandosio “Reaction against machine-culture. The development of neotechnology is by no means an ineluctable fate; “information society” is not the end towards which humanity is naturally tending, contrary to the view of those who, following the example of Alvin Toffler in The Third Wave, divide history into successive stages that proceed from the concrete (the agricultural “revolution”) to the abstract (the information “revolution”), with industrial society as the intermediate stage. We have long been told about the ineluctable advent of the “third industrial revolution” and of the “information society” which is its alleged result. a) This informatization was inevitable; the fact that the national and supranational institutions had foreseen it is a sign of their clairvoyance and their solicitude with respect to the populations for whom they are responsible; Technics in general is often confounded with technology. 1.

Physicist Proposes New Way To Think About Intelligence (ISNS) -- A single equation grounded in basic physics principles could describe intelligence and stimulate new insights in fields as diverse as finance and robotics, according to new research. Alexander Wissner-Gross, a physicist at Harvard University and the Massachusetts Institute of Technology, and Cameron Freer, a mathematician at the University of Hawaii at Manoa, developed an equation that they say describes many intelligent or cognitive behaviors, such as upright walking and tool use. The researchers suggest that intelligent behavior stems from the impulse to seize control of future events in the environment. This is the exact opposite of the classic science-fiction scenario in which computers or robots become intelligent, then set their sights on taking over the world. "It's a provocative paper," said Simon DeDeo, a research fellow at the Santa Fe Institute, who studies biological and social systems. "It actually self-determines what its own objective is," said Wissner-Gross.

The real reason Elon Musk is scared of A.I. | We Are Many Elon Musk and other big shots in the tech industry are really scared of artificial intelligence. He recently donated $10 million to “an AI research institute earmarked for a global research program aimed at keeping AI beneficial to humanity.” What he and his friends fear is an uncontrollable “demon” as he calls it, one that we would summon ourselves and be unable to bend to our will. He actually refers to the movie Terminator to explain the potential dangers of AI. There are a lot of people taking him seriously, after all, $10 million can buy you a lot of credibility, and Musk is venerated in the tech industry for his innovative ventures like Tesla and SpaceX. Of course, Musk is not the first to echo this specific type of existential fear. It would be easy to dismiss these claims as eccentricity or perhaps even easier to tacitly agree with them based on our insidious form of 21st century common sense that sees nothing as impossible or really all that important.

Hugo de Garis Hugo de Garis (born 1947, Sydney, Australia) was a researcher in the sub-field of artificial intelligence (AI) known as evolvable hardware. He became known in the 1990s for his research on the use of genetic algorithms to evolve neural networks using three-dimensional cellular automata inside field programmable gate arrays. He claimed that this approach would enable the creation of what he terms "artificial brains" which would quickly surpass human levels of intelligence.[1] He has more recently been noted for his belief that a major war between the supporters and opponents of intelligent machines, resulting in billions of deaths, is almost inevitable before the end of the 21st century.[2]:234 He suggests AIs may simply eliminate the human race, and humans would be powerless to stop them because of technological singularity. De Garis originally studied theoretical physics, but he abandoned this field in favour of artificial intelligence. Evolvable hardware[edit] Current research[edit]

Florida pastor plans to convert robots to Christianity Artificial intelligence and autonomous robots should be encouraged to become religious, a US reverend has said. Reverend Christopher Benek, associate pastor of Providence Presbyterian Church in Florida, believes advanced forms of artificial intelligence should be welcomed into the Christian faith. "I don't see Christ's redemption limited to human beings," Benek said in an interview with the futurist Zoltan Istvan. "If AI is autonomous, then we should encourage it to participate in Christ's redemptive purposes in the world." The rise of artificial intelligence in recent years has led several high-profile scientists and futurists to warn of the dangers posed if its development is not kept in check. In January renowned physicist Stephen Hawking and entrepreneur extraordinaire Elon Musk pledged to ensure that the development of artificial intelligence benefits rather than hinders mankind. "Who is to say that one day AIs might not even lead humans to new levels of holiness?"

Literal Smart Dust Opens Brain-Computer Pathway to “Spy on Your Brain” Source: Activist Post Some might have heard about Smart Dust; nanoparticles that can be employed as sensor networks for a rangeof security and environmental applications. Now, however, literal Smart Dust for the brain is being proposed as the next step toward establishing a brain-computer interface. The system is officially called “neural dust” and works to “monitor the brain from the inside.” This paper explores the fundamental system design trade-offs and ultimate size, power, and bandwidth scaling limits of neural recording systems. A network of tiny implantable sensors could function like an MRI inside the brain, recording data on nearby neurons and transmitting it back out. The investment in neuroscience has received a $100 million dollar commitment via Obama’s BRAIN project, while Europe has committed $1.3 billion to build a supercomputer replica of the brain in a similarly comprehensive and detailed fashion as the Human Genome Project mapped DNA.

A robot prepared for self-awareness: Expanded software architecture for walking robot Hector -- ScienceDaily A year ago, researchers at Bielefeld University showed that their software endowed the walking robot Hector with a simple form of consciousness. Their new research goes a step further: they have now developed a software architecture that could enable Hector to see himself as others see him. "With this, he would have reflexive consciousness," explains Dr. Holk Cruse, professor at the Cluster of Excellence Cognitive Interaction Technology (CITEC) at Bielefeld University. The architecture is based on artificial neural networks. Together with colleague Dr. Both biologists are involved in further developing and enhancing walking robot Hector's software. Until now, Hector has been a reactive system. In their previous research, both CITEC researchers had already determined that Hector's control system could adopt a number of higher-level mental states. In their new research, Cruse and Schilling show a way in which reflexive consciousness could emerge.