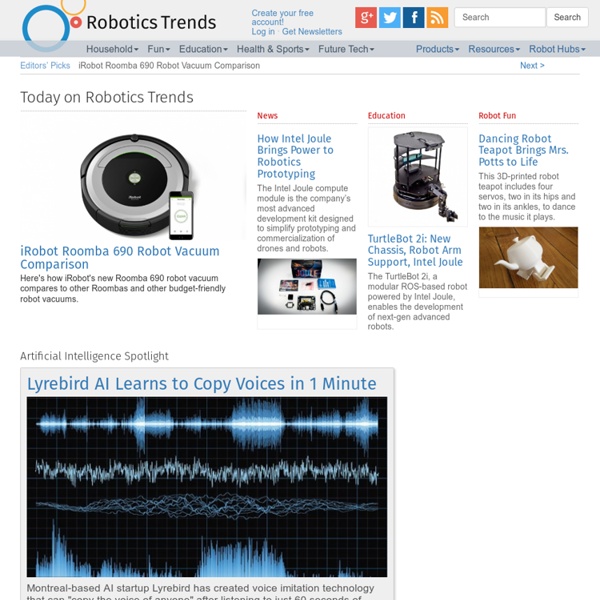 RoboBusiness The Rise of Robotics Robotic applications have evolved over time. Historically, robots were used in manufacturing largely for repetitive tasks that require speed, strength, and moderate precision, such as material handling and processing, welding and soldering, and assembly. With their growing computing power and the development of miniature precision sensors, robots are moving from making cars to driving them. As they become more affordable and application programming becomes easier with more sophisticated user interfaces, robots are making small-batch production economically more feasible, because line changeovers are much faster. Given that product life cycles are getting shorter and just-in-time manufacturing helps minimize the need for inventory, robotic flexibility and responsiveness are important benefits. And since many of the new robots have multiple arms, they can multitask with ease—and without losing focus. Industries with complex supply chains may also benefit from robotics.

The Robots Are Winning! by Daniel Mendelsohn Her a film directed by Spike Jonze Ex Machina a film directed by Alex Garland We have been dreaming of robots since Homer. …He was crafting twenty tripods to stand along the walls of his well-built manse, affixing golden wheels to the bottom of each one so they might wheel down on their own [automatoi] to the gods’ assembly and then return to his house anon: an amazing sight to see. These are not the only animate household objects to appear in the Homeric epics. As amusing as they are, these devices are not nearly as interesting as certain other machines that appear in classical mythology. donned his robe, and took a sturdy staff, and went toward the door, limping; whilst round their master his servants swiftly moved, fashioned completely of gold in the image of living maidens; in them there is mind, with the faculty of thought; and speech, and strength, and from the gods they have knowledge of crafts. This story is, in its way, an heir to Frankenstein and its literary forerunners. Letters

IBM sticks Watson's brain into a friendly virtual assistant In Brief Meet Amelia. She's a virtual assistant born out of a partnership between IPsoft and IBM's Watson. What It Is Amelia is a friendly virtual assistant designed for business environments. The Implications We’re going to be dealing with a lot of robots like this going forward, especially if there are tasks that require both skill and instruction. Microsoft “Project Premonition” Can Prevent Epidemics Before They Happen This new project by Microsoft will employ drones to conduct genetic tests on mosquitos, analyzing infectious strands and producing vaccines before any disease outbreak can occur. Malaria: the Secret Killer As a widespread disease that is transmitted by mosquitoes, malaria affects over 500 million people annually. Over one million people die each year from mosquito-borne diseases. In fact, for every war that America fought in the 20th century, malaria killed more people than the gunfire did. Microsoft saw it fit to put a stopper on these fatal insects. Drones in the Bug Battlefield Project Premonition consists of using drones to capture mosquitos and transport them to remote locations to analyze their DNA. The project also aims to combat other emerging infectious diseases (EIDs) such as Ebola, which were caused by previously unknown pathogens. The End of Epidemics Sources: Tech Times, CBS Seattle, Newsweek, Popular ScienceImage Credit: Youtube, Newsweek

Unmanned Ship Expected to Make Cross-Atlantic Voyage in 2020 In Brief Plymouth University in the United Kingdom revealed plans to build a "full-sized" autonomous unmanned ship. The ship will replicate the Mayflower journey across the Atlantic in 2020. Plymouth University is calling the project Mayflower Autonomous Research Ship, or MARS. Plymouth company MSubs will lead the project’s construction, but there’s potential regulatory issues with bodies such as the UK Maritime and Coastguard Agency.The ship will be designed by Shuttleworth Design, and early renders show it has two outriggers. The researchers plan to try out new navigation software as well as alternative forms of power, including wind.The researchers believe this project has the “potential to transform and influence the future of world shipping.”

Autonomous Reproduction: Evolving Robots Are Here A study by the University of Cambridge examined the "evolution" of robots, where a mother robot created increasingly successful offspring based on natural selection. A mother robot designs and builds her own children, with each generation better suited to the environment than the last. By the final round, she has produced a generation that is over twice as fit as the first. The experiment, conducted by researchers at the University of Cambridge, aimed to test the customization and evolution potential capable by robots. “We think of robots as performing repetitive tasks, and they’re typically designed for mass production instead of mass customization,”says lead researcher Dr. Fumiya Iida. In their experiment, a mother robot built her own children and allowed them to run, using the total distance traveled in a certain amount of time as an indicator of fitness. The children were created using one to five plastic cubes with a motor inside. The robots “evolved” in the same way as animals.

Robots Won't Own You. You'll Own the Robot. The robots are not taking our jobs. Yet. There are few if any signs of this occurring. But that doesn’t mean that the rise-of-the-robots scenario is unthinkable. So while it isn't worth panicking about, it might be useful to think about how to respond if this scenario does end up materializing. The best depiction I’ve seen of this scenario isn't in any economics paper, but from a web comic. In the past, machines always complemented humans instead of replacing them. But as artificial intelligence becomes more sophisticated and widespread, it may be able to eliminate the need for human control entirely. Of course, with such smart AIs to do our bidding, any human could easily be a company owner. In other words, the end of labor, combined with the rise of winner-take-all markets, could cause a huge runup in inequality. Many people argue that since there will always be demand for more products, there will always be more work for humans to do. Would income redistribution be the answer?

Should humans be able to marry robots? (credit: AMC) The Supreme Court’s recent 5–4 decision in Obergefell v. Hodges legalizing same-sex marriage raises the interesting question: what’s next on the “slippery slope”? Robot-human marriages? Why yes, predicts Gary Marchant on Slate. “There has recently been a burst of cogent accounts of human-robot sex and love in popular culture: Her and Ex Machina, the AMC drama series Humans, and the novel Love in the Age of Mechanical Reproduction,” he points out, along with David Levy’s 2007 book, Love and Sex With Robots. But will the supremes’ decision open the door to robot-human marriage? Individual autonomy, the right of each of us to decide our own private choices. “While few people would understand or support robot-human intimacy today, as robots get more sophisticated and humanlike, more and more people will find love, happiness, and intimacy in the arms of a machine.” Amara D.

Will robot pets replace the real thing? Sony’s Aibo pet robot dogs. — credit | Sony University of Melbourne animal welfare researcher Jean-Loup Rault, PhD says pets will soon become a luxury in an overpopulated, high-density world and the future may lie in robot pets that mimic the real thing. “It might sound surreal for us to have robotic or virtual pets, but it could be totally normal for the next generation,” Rault said. “Pet robotics has come a long way from the Tamagotchi craze of the mid-1990s. “You won’t find a lot of research on pet robotics out there, but if you Google robot dogs, there are countless patents. “Robots can, without a doubt, trigger human emotions,” Rault added. “Of course we care about live animals, but if we become used to a robotic companion that doesn’t need food, water or exercise, perhaps it will change how humans care about other living beings.” Rault says robot pets of the future could learn to think and respond on their own. And what about robotic cats? Sony | An Aibo demonstration.

8 industries robots will completely transform by 2025 Kim Kyung Hoon/ReutersRobot HRP-2 demonstrates use of a tap after washing a cup at Tokyo University Just as ATMs changed banking and computers took over the home and workplace, robots and artificial intelligence are going to transform a bunch of industries over the next decade. By 2025, a machine may be putting together your driverless car in a factory with no human oversight. A robot maid could be cleaning up after you at home, and your financial advisor might be a computer investing for you automatically. And with at least 90 countries operating unmanned aerial vehicles, the wars of the future may increasingly be fought with "drone" aircraft. These are just some of the interesting — and sometimes scary — predictions to come from a 300-page report released by Merrill Lynch in November, which estimates the global market for robots and AI will grow from $28 billion to more than $150 billion just five years from now. Here are the big predictions from Merrill Lynch:

Roboticists learn to teach robots from babies -- ScienceDaily Babies learn about the world by exploring how their bodies move in space, grabbing toys, pushing things off tables and by watching and imitating what adults are doing. But when roboticists want to teach a robot how to do a task, they typically either write code or physically move a robot's arm or body to show it how to perform an action. Now a collaboration between University of Washington developmental psychologists and computer scientists has demonstrated that robots can "learn" much like kids -- by amassing data through exploration, watching a human perform a task and determining how best to carry out that task on its own. "You can look at this as a first step in building robots that can learn from humans in the same way that infants learn from humans," said senior author Rajesh Rao, a UW professor of computer science and engineering. "Babies engage in what looks like mindless play, but this enables future learning.

Scientists teach machines to learn like humans -- ScienceDaily A team of scientists has developed an algorithm that captures our learning abilities, enabling computers to recognize and draw simple visual concepts that are mostly indistinguishable from those created by humans. The work, which appears in the latest issue of the journal Science, marks a significant advance in the field -- one that dramatically shortens the time it takes computers to 'learn' new concepts and broadens their application to more creative tasks. "Our results show that by reverse engineering how people think about a problem, we can develop better algorithms," explains Brenden Lake, a Moore-Sloan Data Science Fellow at New York University and the paper's lead author. "Moreover, this work points to promising methods to narrow the gap for other machine learning tasks." "It has been very difficult to build machines that require as little data as humans when learning a new concept," observes Salakhutdinov.

The Day You’ll Prefer Robots to Humans Finally, the robot revolution is arriving. There's a Cambrian explosion in robotics, with species of all sizes, shapes and modes of mobility crawling out of the muck of the lab and onto the terra firma of the marketplace, about to enter your home and your shopping experience. Here's why… 4 Converging (Enabling) Technologies Four converging tech areas enable the revolution. I write about this in detail (both the technologies and business opportunities) in my next book BOLD (coming out February 2015). Sensors: The sensors that cost you $10 today would have been military secrets costing you tens of thousands of dollars 20 years ago. As I’ve mentioned in previous blogs, there was a big move made in Q4 of last year when Google announced the acquisition of eight robotics companies, including Boston Dynamics. In recent months, we've seen the introduction of robotic guards (Nightscape's K5, for example) and Savioke, a robot delivery boy in hotels and hospitals. Here’s what’s most exciting for me…