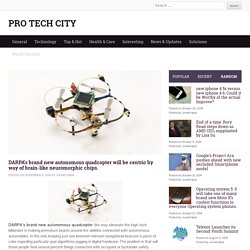 In the end, keeping just one between relevant navigational beacons is piece of cake regarding particular goal algorithms jogging in digital hardware. The problem is that will those people final several percent things connected with occupant or bystander safety apparently encourage them every time. Many technological know-how followers, such as DARPA, imagine that brain-like neuromorphic potato chips that will bleep digital surges with the other person might provide solution — if only someone understood just what must crank out this surges many people employ. How robotics skills will dominate future defence jobs. Robotic devices are starting to percolate throughout the defence sector, from bombers and bomb disposal to aerial reconnaissance to convoys of driverless lorries. 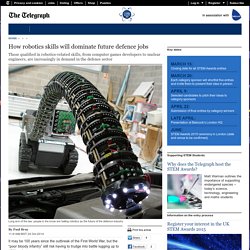 Even something as apparently mundane as a driverless truck not only reduces the risk of a human driver being blown up by a roadside bomb, but also removes the need for very expensive armour-plating to protect that driver. Robotics-related skills are sought-after and the work is demanding. “We want people with good engineering degrees – mechanical, electronic and IT – from good universities,” says Mitchell. “You also need to be innovative because what we do is unique; we may be starting with a blank sheet of paper. And at the forefront of our minds is the fact that we have to get it right, because a soldier’s life may depend on it.” Andy Graham was bitten by the robotics bug at the University of Bristol in the Nineties. Move it: Humanoid robots on display in Beijing, China STEM Awards 2015Change your future. Will robots replace millions of human workers? The Future Of French Robotics. Editor’s note: Laetitia Vitaud is a blogger, coach, teacher of U.S. politics in France and passionate about the digital transition of our economy. 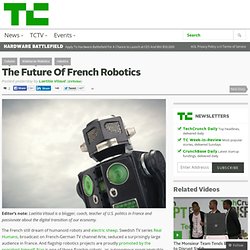 Romeo is supported by Paris business cluster Cap Digital and is destined, like Real Humans’ fictitious “hubots” to help the elderly and the sick regain some form of autonomy. These are the types of robots used to showcase France’s engineering prowess. Yet a few extra decades will still be necessary to produce robots that can perform half as much as a human maid. What’s been known as “Moravec’s paradox” is the fact that high-level reasoning and calculation require little computation, whereas low-level sensorimotor skills require huge computational resources. “It is comparatively easy to make computers exhibit adult-level performance on intelligence tests or playing checkers, and difficult or impossible to give them the skills of a one-year-old when it comes to perception and mobility.”

The Lowe’s Robot and the Future of Service Work - The New Yorker. Kyle Nel, who runs the Innovation Labs division of the Lowe’s hardware chain, began brainstorming several months ago about how the company might make use of an in-store robot. 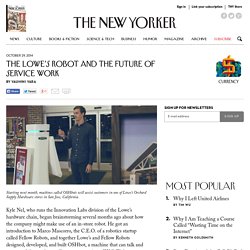 He got an introduction to Marco Mascorro, the C.E.O. of a robotics startup called Fellow Robots, and together Lowe’s and Fellow Robots designed, developed, and built OSHbot, a machine that can talk and move, and that evokes a taller, squarer version of Wall-E’s love interest, EVE. Starting next month, Lowe’s plans to release several OSHbots into one of its Orchard Supply Hardware stores (the “OSH” in OSHbot) in San Jose, California. The robots’ job will be to greet customers, help them find what they need, and guide them around the store. In a typical interaction, Nel told me, an OSHbot would roll up and greet you as you walked in: “Hi, can I help you? What are you looking for today?” In 1970, a Japanese robotics engineer named Masahiro Mori published a paper called “The Uncanny Valley.”

Current Trends in the Area of Robotic Technology - Invent.Answers.com. They are called wearable robots, robotic suits, and a few other things. 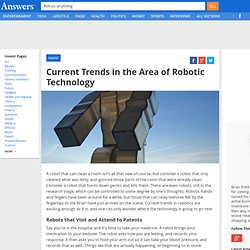 Recent technological advances have made it possible for those who have lost some or all of the ability to use their legs, or have lost their legs, to walk. These suits are fitted at the waist and have legs that are capable of fully mimicking a human's walking motions. They aren't just mechanisms that move back and forth, as legs would. They are controlled by the shifting of body weight. Myth of the ‘real-life Robocop’ Reports that the ultimate crime enforcer may be on our streets soon is largely news hype, says Quentin Cooper. 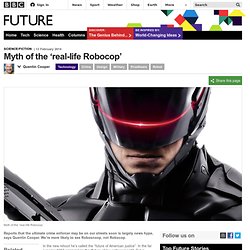 We’re more likely to see Robosnoop, not Robocop. In the new reboot he’s called the “future of American justice”. In the far superior 1987 original he’s the “future of law enforcement”*. But is Robocop the future of anything? Both versions of the movie explore how the war against crime might be turned by a man-machine cyborg, programmed to “serve the public trust, protect the innocent, uphold the law”. Given our fondness both for police dramas and for stories where humans work alongside humanoid machines (Data in Star Trek, David in AI, David in Prometheus, plus many others not brought to you by the letter D) it’s easy to see why television and movie executives keep going back to the same premise.