Discovery of Drug Compound Against Malaria Ushers In Age of Robot Scientists. Eve, the robot scientist based in the University of Manchester, has discovered a compound that can help in fighting malaria. 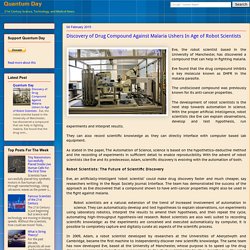 Eve found that the drug compound inhibits a key molecule known as DHFR in the malaria parasite. The undisclosed compound was previously known for its anti-cancer properties. The development of robot scientists is the next step towards automation in science. With the proper artificial intelligence, robot scientists like Eve can explain observations, develop and test hypothesis, run experiments and interpret results. They can also record scientific knowledge as they can directly interface with computer based lab equipment.

As stated in the paper, The Automation of Science, science is based on the hypothetico-deductive method and the recording of experiments in sufficient detail to enable reproducibility. Eve, an artificially-intelligent 'robot scientist' could make drug discovery faster and much cheaper, say researchers writing in the Royal Society journal Interface. Robotic Surgery and Other Medical Machines - An Infographic. Medical technology is catching up with science fiction in terms of machines performing medical procedures. 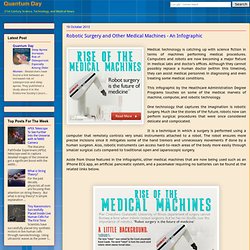 Computers and robots are now becoming a major fixture in medical labs and doctor's offices. Although they cannot possibly replace a human doctor (within this timeline), they can assist medical personnel in diagnosing and even treating some medical conditions. This infographic by the Healthcare Administration Degree Programs touches on some of the medical marvels of machine, computer, and robotic technology. One technology that captures the imagination is robotic surgery. New Method May Lead to Hydrogel Based Soft Robots. North Carolina State University researchers have developed a method that creates devices from hydrogel, a water based poylmer material. 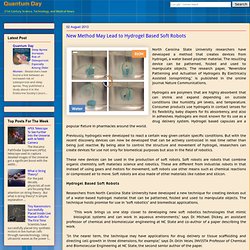 The resulting device can be patterned, folded and used to manipulate objects. The research paper, "Reversible Patterning and Actuation of Hydrogels By Electrically Assisted Ionoprinting," is published in the online journal Nature Communications. Hydrogels are polymers that are highly absorbent that can shrink and expand depending on outside conditions like humidity, pH levels, and temperature. Consumer products use hydrogels in contact lenses for its flexibility, baby diapers for its absorbency, and also in adhesives. Hydrogels are most known for its use as a drug delivery system. Previously, hydrogels were developed to react a certain way given certain specific conditions. Quadruped Cheetah-Cub Robot Developed Through Biomechanics.

Researchers at the Ecole Polytechnique Fédérale de Lausanne using biomechanics, have developed a four legged robot that can run like a cat, with speeds up to seven times its body length per second. 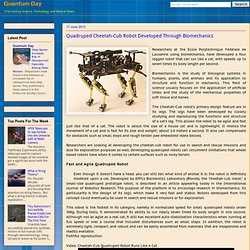 Biomechanics is the study of biological systems in humans, plants, and animals and its application to structure and function in mechanics. Brain-Computer Interface Allows Helicopter To Fly Under Mind Control. A helicopter has been developed that can be controlled just by the power of thought. 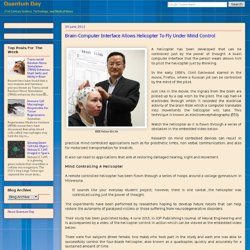 A brain computer interface that the person wears allows him to pilot the helicopter just by thinking. In the early 1980's, Clint Eastwood starred in the movie, Firefox, where a Russian jet can be controlled by the mind of the pilot. The RoboBee - Tiny Flying Robot Developed and Inspired By Biology and Insects. Engineers at the Harvard School of Engineering and Applied Sciences have developed a tiny robot insect, the size of a penny, that has the ability of controlled flight. 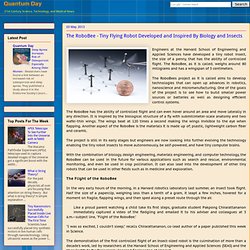 The RoboBee, as it is called, weighs around 80 milligrams and has a wingspan of 3 centimeters. The RoboBees project as it is called aims to develop technologies that can open up advances in robotics, nanoscience and micromanufacturing. Science of Terradynamics Opens up Possibility of Developing Walking Robots on Mars. Terradynamic researchers are developing small legged robots that someday may be used in scouting missions regardless of the surface. 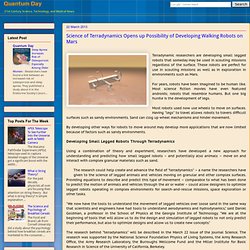 These robots are perfect for use in scouting missions as well as in exploration in environments such as Mars. For years, robots have been imagined to be human like. Most science fiction movies have even featured androids; robots that resemble humans. But one big hurdle is the development of legs. Most robots used now use wheels to move on surfaces. By developing other ways for robots to move around may develop more applications that are now limited because of factors such as sandy environments.Developing Small Legged Robots Through Terradynamics.

Efficient Optical Measurement Through Robotic Technology: Robo-Goniometer. An optical measurement system has been developed by Opsira that delivers state-of-the-art performance, reliability, and efficiency. 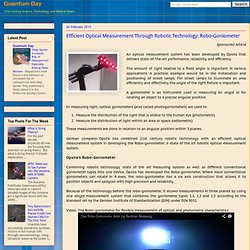 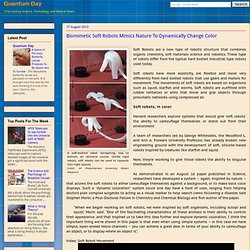 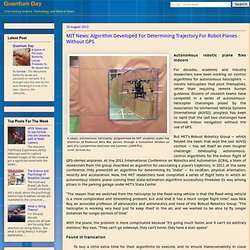 Dozens of research teams have competed in a series of autonomous-helicopter challenges posed by the Association for Unmanned Vehicle Systems International (AUVSI); progress has been so rapid that the last two challenges have involved indoor navigation without the use of GPS. But MIT’s Robust Robotics Group — which fielded the team that won the last AUVSI contest — has set itself an even tougher challenge: developing autonomous-control algorithms for the indoor flight of GPS-denied airplanes. With the plane, the problem is more complicated because “it’s going much faster, and it can’t do arbitrary motions,” Roy says.

“They can’t go sideways, they can’t hover, they have a stall speed.”