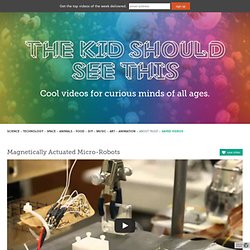 Boomer the Toy Dinosaur. Hands on With Parrot Mini Drones. Drone flying may still be controversial (for reasons of privacy and safety) — but the inescapable truth is that it is also a lot of fun. 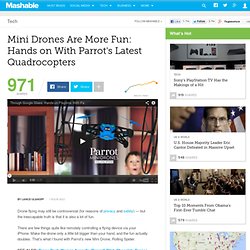 There are few things quite like remotely controlling a flying device via your iPhone. Make the drone only a little bit bigger than your hand, and the fun actually doubles. 10 More Reasons To Be Terrified Of Robots. Technology We’ve already seen how robots are going to enslave and kill the entire human race, but let’s go ahead and drive the final nail into that coffin. 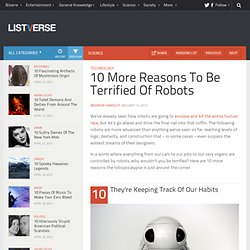 The following robots are more advanced than anything we’ve seen so far, reaching levels of logic, dexterity, and construction that – in some cases – even surpass the wildest dreams of their designers. In a world where everything from our cars to our jobs to our very organs are controlled by robots, why wouldn’t you be terrified? Here are 10 more reasons the robopocalypse is just around the corner.

They’re Keeping Track Of Our Habits It looks innocent enough, but beneath the adorable exterior of the ApriPoco robot lies a cold, calculating memory bank. Then, when you want to repeat that action, you tell it something like “Turn on the Blu-Ray player,” and it will do what you ask. They’ve Mastered Mind Control The video above shows a cockroach being directed by electrical pulses delivered to its brain.

They Can Move Faster than Sound. Fractal Robots- Self Repair ( HD 720p ) 10 Reasons to be Terrified of Robots. Technology The human race thrives on the advancement of technology, which is responsible for practically everything we have and use today. 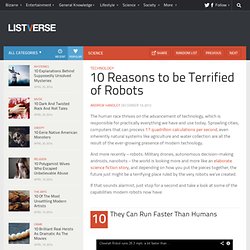 Sprawling cities, computers that can process 17 quadrillion calculations per second, even inherently natural systems like agriculture and water collection are all the result of the ever-growing presence of modern technology. And more recently – robots. Military drones, autonomous decision-making androids, nanobots – the world is looking more and more like an elaborate science fiction story, and depending on how you put the pieces together, the future just might be a terrifying place ruled by the very robots we’ve created.

If that sounds alarmist, just stop for a second and take a look at some of the capabilities modern robots now have: They Can Run Faster Than Humans. The Cubli. MIT’s M-Blocks: A New Class Of Robot Cubes That Self Assemble. What if robots could reassemble themselves at will? The liquid metal cyborg in Terminator was terrifyingly useful. It could look like anyone, repair shotgun blasts, even turn its hand into a murderous icepick. Superstrong Artificial Muscles Developed From Fishing Line and Sewing Thread. We tend to dream of a future enabled by miraculous materials—nanoscale honeycomb lattices of strong, ultralight superconducting metals. Carbon nanotubes and graphene come to mind. Fishing line and sewing thread?

Not so much. But recent research out of the University of Texas and Australia’s University of Wollongong shows futuristic inventions can be rooted in the mundane. By twisting fishing line and thread like a rubber band, the scientists produced artificial muscle 100 times stronger than human muscle. Geoff Spinks, the lead Australian researcher, said, “After nearly two decades developing exotic materials as artificial muscles, we have now discovered that the best performing systems can be made from ordinary, everyday fishing line.” The team heat treated the coils of fishing line so they’d maintain their twist. Current artificial muscles in robots tend to be hydraulically powered. Artificial muscle made of fishing line lifts weights. The team also wove textiles out of the material. Cheetah-cub Robot Mimics the Real Thing, Stable Even at Top Speeds. Remember watching Boston Dynamics’ Cheetah robot outrun Usain Bolt?

Meet its little cousin, Cheetah-cub , built by EPFL’s Biorobotics Laboratory (Biorob). Being just a cub, it’s no Usain Bolt, but Biorob believes it’s the fastest robot of its kind. Cheetah-cub is about 21 centimeters long and weighs a kilogram—roughly the same size as its namesake or, less provocatively, a common house cat. Its top speed is about 3.2 miles per hour, or seven body lengths a second. New Video Of Sand Flea Robot Leaping (Onto) Tall Buildings 30ft High.

With an onboard camera and the ability to leap over walls and onto building roofs, Sand Flea is a nimble surveillance tool for warzone solders. It doesn’t look like much, kind of a simple RC car. That is, until it jumps. Boston Dynamics just released a video of their Sand Flea robot , and man can it jump. It rolls around, then stops, rears back on its hind wheels, and springs over walls and onto roofs – up to 30 feet high!