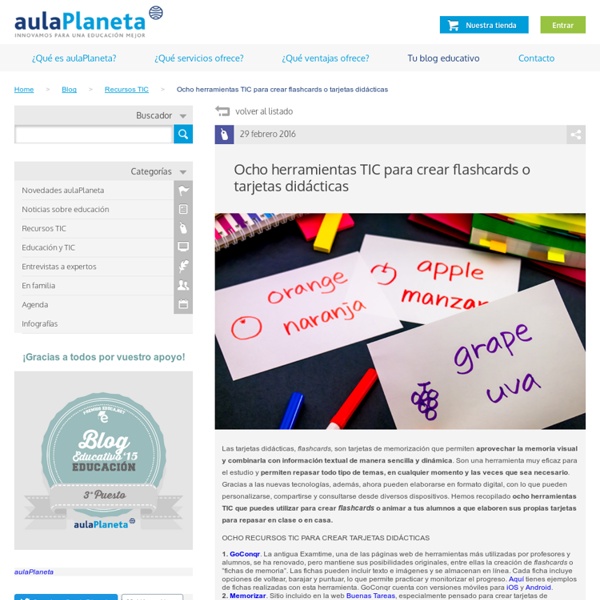 15 Great Tools to Publish Student Writing - Practutor Blog Why do kids give their best when playing baseball? It isn’t a test, and nobody is going to invite them to join the Major League only because they performed well in one game. Why do children love devoting themselves to a baseball game, even though, it is not being assessed?

10 Ways to Use Twitter in the Classroom Twitter was created as a social media tool, but it has uses outside the social world. Teachers are using twitter in the classroom to improve instruction, connect their students with the world, and keep in touch. In this article, we will list 10 ways that you can use Twitter in the classroom. Soundbites for the Classroom In a time-stressed world, it seems that soundbites are all we have time to pay attention to. On public transport, in the media, and yes, even in the classroom. One of my regular routines is to project soundbites (or more commonly referred to as quotations) on the board as students walk into the classroom and settle down to a lesson. In other contexts I have used music, these days however, I tend to use visual images to indicate a different space, a change of pace, a moment to transit from the outside world into the rhythms of practice and learning. Sometimes there is a nudging to remind students that success is a result of dedicated work; other times, an image with words can turn on smiles and lighten up the burden of having to sit for another hour and focus on learning. If you use a LMS such as Edmodo, you can also post quotations to the group and ask students if they agree/disagree or what else they would add.

The Call to Teach: Multicultural Education America’s “melting pot” status is one that most citizens are proud to claim. The fact that people here often refer to themselves as one ethnicity or another, and rarely as simply an American, is proof that being from somewhere else – however far removed – is a source of familial pride. Even African Americans, who do not always have an Ellis Island story in the family tree, find collective strength in the stories of their ancestors and what it means for their lives today. This blending of cultures is both a blessing and curse of the K-12 classroom.

5 Tools to Convert and Edit The PDF Format Advertisement PDF files are the digital equivalent of the paper document: made to be shared and read, and occasionally filled in like a form, but not really intended to be easily edited. You could argue the format is outdated in our increasingly post-paper world, but PDF documents aren’t going anywhere anytime soon.

How to Lose Weight Fast: 3 Simple Steps, Based on Science There are many ways to lose a lot of weight fast. However, most of them will make you hungry and unsatisfied. If you don't have iron willpower, then hunger will cause you to give up on these plans quickly. The plan outlined here will: Reduce your appetite significantly.Make you lose weight quickly, without hunger.Improve your metabolic health at the same time. World English Language Day 2018 Information, History, Importance, Essay, Speech, Celebration Ideas & Activities Man invented the language to communicate with each other. In order to live and survive in a society, human beings needed to share their ideas, thoughts, and experiences with each other. That is how communication was started. And the communication gave birth to the language. 23rd April is celebrated as global English Language Day across the world.

April 23 Is English Language Day Happy English Language Day! English Language Day is celebrated each year on April 23 – the date when tradition says William Shakespeare was born. Shakespeare has been called the greatest writer in the English language. His plays continue to be published, performed in theaters and seen in films almost 400 years after his death. Teaching resources for English Language Day Martyn Clarke has worked in ELT classrooms as a teacher and trainer for over twenty years and in more than fifteen countries. He has taught English at all levels and in many contexts from one-to-one in financial institutions to rural schools with classes of eighty students. April 23rd is an important day in the UK. First, it is St George’s Day. St George is the Patron Saint of England, most famous in this country for killing a dragon to protect a princess. Second, it is William Shakespeare’s birthday.

6 Activities for English Language Day on April 23rd - Helbling Readers BLOG Illustration from World Around, a culture course written by Maria Cleary. © Helbling Languages English Language Day at the United Nations is celebrated on 23 April, the date traditionally observed as the birthday of William Shakespeare (1564). This day is also the day of of Shakespeare’s death (1616), and Saint George’s Day, which is the National Day of England. Take a break from your usual routine, take a different perspective on the language, and dedicate a fun lesson to learn about the English language. If you think your students are up to some role-play and drama, dedicate a lesson to Shakespeare and drama.