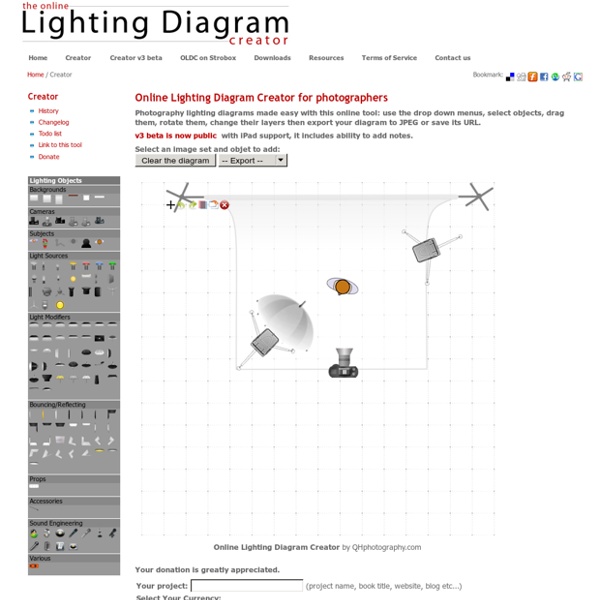 Photography lighting diagrams made easy with this online tool: use the drop down menus, select objects, drag them, rotate them, change their layers then export your diagram to JPEG or save its URL. v3 beta is now public with iPad support, it includes ability to add notes. Select an image set and objet to add: Online Lighting Diagram Creator by QHphotography.com Your donation is greatly appreciated. A minimum donation of $10 USD is asked for each commercial project (except the use on a photographer website, blog or gallery). The Online Lighting Diagram Creator is a personal project that requires a lot of resources to be developed and maintained. If you use the OLDC and are happy with it, I'd love if you would consider donating. Known issues : You can now export to JPEG and generate a URL that allows you to bookmark your diagram.

The first negative – BLUR Magazine Featured image: Latticed window at Lacock Abbey, Wiltshire by William Henry Fox Talbot. Considered the first example of a negative image. In August 1835, exact date sadly unknown, the world’s earliest surviving negative was created by William Henry Fox Talbot. It captured forever a simple latticed window at Lacock Abbey, Wiltshire, and this earliest example of a negative image is now preserved in the archives of National Media Museum in Bradford, UK, the UNESCO City of Film. Virtual Lighting Studio - Interactive portrait lighting The ambient light represents the light coming from the studio environment. You can turn it on or off and change its color and intensity. If you're lost and need some help, click here. But you probably know that... Click on any help text to hide this. This is a schematic view of the studio.

DIY: How To Make a Professional Softbox for Under $20 Nowadays a softbox needn't be all that expensive - you can get nice results for $100 or even less. But what if there's a way of making it much cheaper, with the same results? That's what we'll be explaining in this DIY tutorial; how to make a softbox with professional results for less than $20. Step 1: What is a Softbox? A Softbox is a type of light modifier, used specially in studio or outdoor portraits. It creates a soft diffused light by directing light through some diffusing material.

Documentary Photography – Disabled Limb Makers Helping The Disabled In Eastern India Photographer Abhijit Chakraborty is the Edge of Humanity Magazine contributor of this documentary photography. From his project ‘Determination on the move‘. To see Abhijit’s gallery of projects click on any image. People who have lost their legs in an accident, and are undergoing treatment, come to this hospital often for routine check-ups. Amrit Lal Saroj, a resident of Bihar, has lost many of his body parts… but he has not lost his faith and he does all his work by himself today.

Aston Martin car logo There have been a number of Aston Martin logos since the company started up in 1916. The first from 1920 was an amalgamation of the letters A and M. The next was inroduced in 1932 and the two wings were borrowed from the Bentley Logo signifying speed. The third was an evolution of the last and the design was gradually improved to keep up with modern tastes.

Studio lighting on a budget Words and pictures Philip Weston If you want to take ultra modern style portraits with the pure white backgrounds, but think you can't because you only have one studio light think again. Experts may tell you that you need five lights comprising main or key light, fill light, hair light and at least two background lights, and who on earth can afford five studio flashes? The secret lies not in throwing money at the idea, but at flexing the old brain power. The only photographic equipment you'll need in addition to your single light is a meter capable of measuring whatever your light is to within a half f/stop accuracy.

Tutorials Archives - PetaPixel Tutorials By time: By topic: Most Popular of all times Refractive index of Ag (Silver) - Rakic Custom Search Shelf Book Page Optical constants of Ag (Silver)Rakić 1998: n,k 0.2066-12.40 µm Wavelength: µm Photoflex Lighting School - Your Free Lighting Lesson Resource Basic Lighting A good place to start. These lessons demonstrate professional lighting techniques using only basic lighting tools. Having good lighting equipment is important, but knowing how to use it well is paramount! Lessons with Video These Simple Animations Are an Intro to Film Photography Back in February, we shared a simple animation made by the film brand Ilford that shows how a film SLR works. It turns out that video was the first in a series of many animations in a playlist titled “Introduction to film photography.” Here’s the complete series so far for your enjoyment:

Categories&Awards Mission We call upon responsible photographers who respect and love life to take out your cameras, and in the form of feature photography: to explore and rescue the endangered folk cultures of nationalities worldwide;