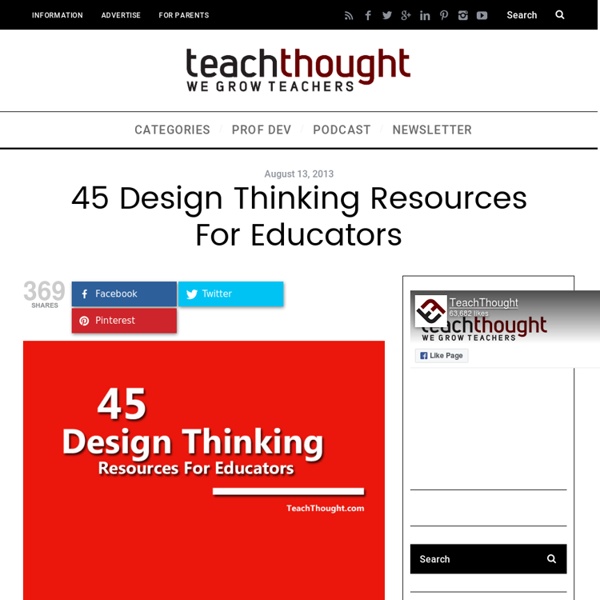 45 Design Thinking Resources For Educators Imagine a world where digital learning platforms help adult learners succeed through college completion; where a network of schools offers international-quality education, affordable tuition, and serves hundreds of thousands of children in economically disadvantaged countries; where we engage parents in understanding national trends and topics in education; where a comprehensive learning environment seamlessly connects the classroom with the opportunities of the digital world for young students; and where system-level solutions help more students gain access to college. Educators across the world have been using design thinking to create such a world. Design thinking consists of four key elements: Defining the Problem, Creating and Considering Multiple Options, Refining Selected Directions, and Executing the Best Plan of Action. An early example of design thinking would have been Edison’s invention of the light bulb.

10 Creative Geniuses Who Had to Fail to Succeed Have you ever been told that you have to fail to succeed? That you should try to fail forward (whatever that means)? Or maybe the classic, “third time’s the charm?” Design Thinking Thomas Edison created the electric lightbulb and then wrapped an entire industry around it. The lightbulb is most often thought of as his signature invention, but Edison understood that the bulb was little more than a parlor trick without a system of electric power generation and transmission to make it truly useful. So he created that, too. Thus Edison’s genius lay in his ability to conceive of a fully developed marketplace, not simply a discrete device. He was able to envision how people would want to use what he made, and he engineered toward that insight.

Design for Extreme Affordability Project Launched: Extreme Team in 2007, company formed in 2008 Current Status: First version of the product launched in 2011, for clinical settings, and is currently being distributed to clinics in South India, where dozens of babies have already been impacted. Partnerships have been formed with several multinational organizations to distribute the product. The Embrace team consists of 35 people, primarily located in Bangalore, India. The organization has received numerous accolades, including the INDEX People’s Choice Award, the largest international design competition. In 2010, it was selected as an “Innovative Technology for Public Health” by the World Health Organization.

Why Making and the Arts Need Each Other to Survive and Thrive in Schools When the visual and performing arts, the musical and recording arts, and the theatrical and graphical arts are seen as mere luxuries or add-ons within the walls of a school, powerful forces are thereby prevented from transforming routine schooling into a renaissance of learning. But who has the time or the funding to allow that to happen? Instead, let’s ask ourselves: How can these constraints compel us to leverage our creativity?

The Ultimate Guide for Becoming an Idea Machine The way to have good ideas is to get close to killing yourself. It’s like weightlifting. When you lift slightly more than you can handle, you get stronger. In life, when the gun is to your head, you either figure it out, or you die. Teaching Kids Design Thinking, So They Can Solve The World's Biggest Problems You cannot solve a problem with the same mind that created it. ? Albert Einstein Assessment The Differentiator Try Respondo! → ← Back to Byrdseed.com The Differentiator STEAM Point Giveaway This is it! There’s only 1 day left before the launch of my new book, STEAM Point, and I’m so glad you tuned in. Today, we’re giving away two great pieces. The first is an assessment excerpt from the new book. This is our teacher’s guided rubric and it aligns to the Common Core Writing Standards, 6+1 Writing Traits, as well as UbD and STEM practices. It’s meant to provide teachers with a way to assess learning in multiple content areas.

A Cognitive Trick for Solving Problems Creatively Many experts argue that creative thinking requires people to challenge their preconceptions and assumptions about the way the world works. One common claim, for example, is that the mental shortcuts we all rely on to solve problems get in the way of creative thinking. How can you innovate if your thinking is anchored in past experience? But I’m not sure that questioning biases from your past experience and assumptions is the best path to creative problem solving — it simply does not seem to fit well with how the mind actually works.

Related:
Related:  Design Based Thinking   -  rgodinez58   -  Creativity   -  Schools of thinking   -  Naomi Klein   -  THE STONE - Opinionator - NYTimes.com - NYTimes.com   -  Teaching Kids Design Thinking, So They Can Solve The World's Biggest Problems | Co.Design | business + design   -  Design Thinking: Lessons for the Classroom | Edutopia   -  A Quick Guide To Managing A Classroom Full Of iPads | Edudemic   -  Logic Fallacies List   -  5 Must-Know Tips For Deploying iPads In Your Classroom | Edudemic   -  THE BASIC TEACHING OF BUDDHA   -  40 Simple Ways To Use A Smartphone In The Classroom   -  iClassroom iManagement – tips for managing an iPad classroom | Reflections of a Passionate Educator   -  10 Great Apps for a Teacher’s New iPad | iPad Apps for School   -  17 Real-World Ways iPads Are Being Used In Schools - Edudemic   -  Mirror iPad, iPhone, iPod to Your Screen for Free   -  The Residential School System   -  The Thirteen Mindfulness Trainings - Ayahuasca-Wasi   -  Down for Maintenance - Orientalia   -  The Conversation: In-depth analysis, research, news and ideas from leading academics and researchers.   -  61 Educational Apps For The 21st Century Student   -  Buddhism   -  What is 3D printing? How does 3D printing work?   -  45 Design Thinking Resources For Educators   -  A history of residential schools in Canada   -  Truth and Reconciliation Commission of Canada (TRC)   -  Buddhist Geeks by Personal Life Media on Apple Podcasts   -  Tabletop Audio - Ambiences and Music for Tabletop Role Playing Games   -  Digital Citizenship: Resource Roundup   -  What Your Students Really Need to Know About Digital Citizenship   -  about | Brain Pickings   -  Cellphones in the Classroom: Distraction or Tool? - ReadWrite   -  Using Smartphones in the Classroom   -  Curriculum for White Americans to Educate Themselves on Race and Racism–from Ferguson to Charleston | Citizenship and Social Justice   -  The 13 most innovative schools in the world