Cellphones in the Classroom: Distraction or Tool? 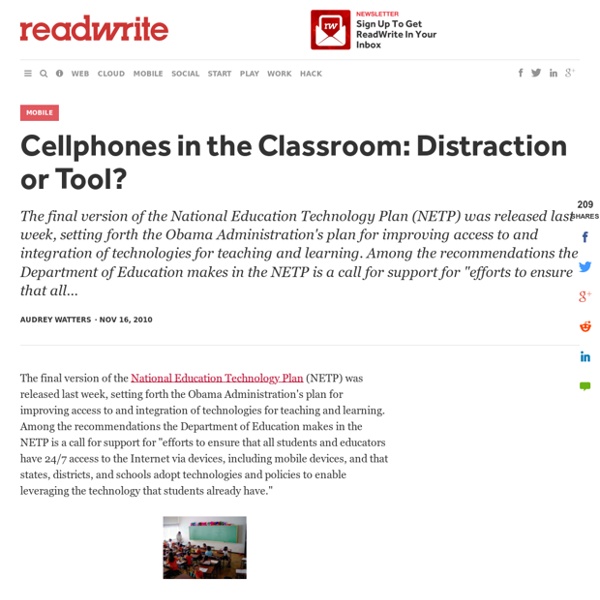 The final version of the National Education Technology Plan (NETP) was released last week, setting forth the Obama Administration's plan for improving access to and integration of technologies for teaching and learning. Among the recommendations the Department of Education makes in the NETP is a call for support for "efforts to ensure that all students and educators have 24/7 access to the Internet via devices, including mobile devices, and that states, districts, and schools adopt technologies and policies to enable leveraging the technology that students already have." The push for "24/7 access to the Internet" falls under another the auspices of yet another endeavor, the National Broadband Plan. But the call for better access to Internet-ready devices, particularly utilizing tools the students already possess is an interesting one. Because the device that is ubiquitous for American students isn't the desktop computer or the notebook or the netbook or the iPad. It's the cellphone.

Mobile Devices in the Classroom As cell phones—with ever-expanding possibilities of texting, Web browsing, and game playing—have multiplied in recent years among teenagers and even preteens, so have the concerns of teachers and administrators about the distractions these devices can cause. A survey of students and parents earlier this year by the group Common Sense Media found that almost 70 percent of schools around the country ban student cell phone use during the school day. But some districts and administrators are realizing the untapped potential of cell phones.

More schools allowing students to bring smart phones, tablets to the classroom At a school district outside Chicago, students participated in a French class by using cellphones to call classmates and speak with them in French. And when school starts this fall at Mason High School near Cincinnati, students like Mrudu Datla will pack iPads and iPhones in their backpacks. "(Using technology in everyday life is) not that new to us because we grew up with technology," Datla, a sophomore, said. Although schools have traditionally banned or limited cellphones in the classroom, 73% of Advanced Placement and National Writing Project teachers said their students use phones in the classroom or to complete assignments, according to a Pew Research Center study released in February. "Teachers are starting to take advantage of the opportunities of cellphones in the classroom," said George Fornero, superintendent of Township High School District 113, located outside Chicago, whose school system has begun allowing its students use cellphones.

Mobile phones in the classroom: teachers share their tips Jo Debens, geography teacher, Priory School, Portsmouth The geography department at my school has been leading the use of mobile device in learning. Throughout last year the mobile@priory charter was created and led by head of department David Rogers and co-constructed by students to enable them to use mobile devices in learning. This was trialled through the geography department and found great success with students becoming more actively engaged with their learning. Some of the examples of where we use mobile devices range from simply taking photos and videos to share in class or recording homework, to creating revision podcasts or animations.

Education Update:Make Parents Your Partners:Can Mobile Devices Transform Education? The popularity of smartphones, including Droids, iPhones, and BlackBerries, that now have GPS, texting, voice, and multimedia capabilities has prompted industry and education reformers to shine the light on these mobile devices as vehicles suitable for transforming K–12 learning for the 21st century. Although they present challenges as well as potential benefits, education experts reason that these powerful small computers motivate students; provide constant access to the wealth of knowledge, tools, and experts on the web; and are cheaper and more plentiful than laptops or desktop workstations. "A big choice for us is: we have this very flexible tool, much more like a Swiss army knife than a hammer. What do we want to use it for?"

Learn2luvcell: A Powerful Multipurpose Mechanism for Learning Query most secondary school teachers on the subject of cell phones, and you're likely to get an impassioned rant about the device's insidious ability to provoke distraction in the classroom. All that giggly sub rosa texting not only robs students of attentiveness, they say, but also presents an inveterate disciplinary problem. It's why most school districts have strict cell phone policies, and most teachers are grateful for it. But some forward-looking educators have begun to push the subversive idea that the high tech wizardry of mobile phones can be a powerful multipurpose mechanism for learning. E-Rate Program - Discounted Telecommunications Services The Universal Service Administrative Company (USAC) is an independent, not-for-profit corporation created in 1997 to collect universal service contributions from telecommunications carriers and administer universal support mechanisms (programs) designed to help communities across the country secure access to affordable telecommunications services. USAC carries out its functions as the administrator of the federal universal service programs and Universal Service Fund (USF) under the oversight of the Federal Communications Commission (FCC). USAC administers universal service programs for high cost companies in rural areas, low-income consumers, rural health care providers, and schools and libraries. The universal service Schools and Libraries Program, commonly known as “E-rate,” provides discounts of up to 90 percent to help eligible schools and libraries in the United States obtain affordable telecommunications and internet access. Eligibility Further Information

12 Easy Ways to Use Technology in the Classroom, Even for Technophobic Teachers Everyone wants teachers to use technology in the classroom. But you're busy -- meeting standards, prepping students for tests -- and maybe you’re not too fond of computers, anyway. Never fear – there are easy ways to bring your classroom up-to-date, technologically. Do you have a iPad in your classroom for your use? Educational Technology and Mobile Learning: Terrific Mini Guide to Help Students Think Critically December 26, 2014 Questioning is the key to critical thinking and through questions students get to explore the deep layers of meanings that would otherwise go unnoticed. Of course not all questions have this analytical ability. For instance, closed questions tend to limit the thinking choices available for students. The same with questions that promote factual recalling. Questions that emphasize the mechanical on the analytical are out of the list.

Do Cell Phones Belong in the Classroom? Mobile devices are ubiquitous in American high schools, and their use is harder to regulate than old-fashioned note passing. But here's why teachers should be paying closer attention. Two U.S. high school students compete in the LG Mobile Worldcup Texting Championship. According to a Pew study, American teenage girls send an average of 100 messages a day. (Reuters)

Watters, A. (2010, November 15). Cellphones in the Classroom: Distraction or Tool? Retrieved February 5, 2015, from by delaneyclodfelter Feb 8