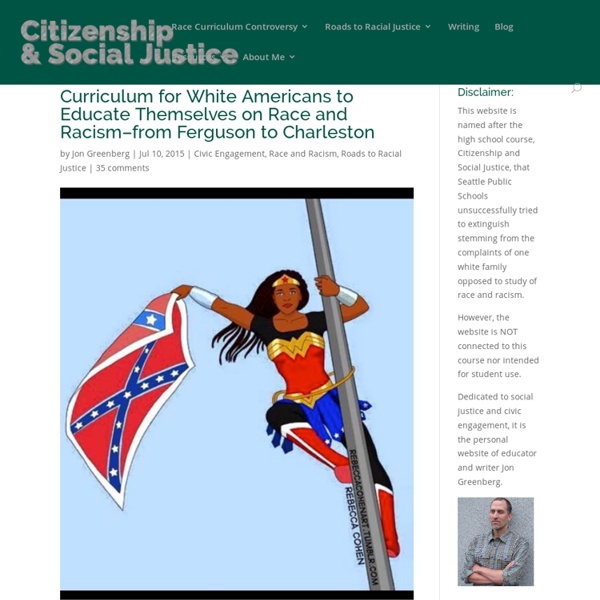 When teaching about race and racism, I invite participants to consider the following analogy: Think of racism as a gigantic societal-sized boot. “Which groups do you think are fighting the hardest against this boot of racism?” I ask them. “If that’s true,” I continue, “then who do you think is wearing the boot?” “If that’s true, then whose responsibility is it to stop the boot from squashing them? Everyone has a role in ending racism, but the analogy shows how little sense it makes for only those facing the heel-end of oppression to do all the work. There are no doubt complexities that come with White Americans working for racial justice. I compiled this list to help White Americans do so. But so much work remains. A few notes about this list: To keep this list from becoming overwhelmingly long, I prioritized recent sources–from Ferguson to Charleston–and organized them in reverse chronological order.Every resource listed is relatively short. By Barry Deutsch What Is Whiteness?

Gene Kummerer: Musings ACT for Youth - Adolescence - Ethnic and Racial Identity Development Identity development, the growth of a strong and stable sense of self across a range of identity dimensions, is central to adolescent development [1]. While we have many types of identities (religious, cultural, and national, to name a few), ethnic and racial identities are an important part of how we see ourselves and how others see us. Ethnic and racial identities, of course, are not adopted solely by minority populations. Visit Toolkit: Identity Development for resources. Ethnicity and Race Ethnicity and race refer to different dimensions of our identities. Ethnicity refers to the idea that one is a member of a particular cultural, national, or racial group that may share some of the following elements: culture, religion, race, language, or place of origin. Race is a social construction that refers to characteristics possessed by individuals and groups. Certain ethnic and racial identities may also confer privilege. What is Ethnic and Racial Identity? Racial Identity Statuses References

Making Modern Toughness Photo When I ask veteran college teachers and administrators to describe how college students have changed over the years, I often get an answer like this: “Today’s students are more accomplished than past generations, but they are also more emotionally fragile.” That rings true to me. Today’s students are amazing, but they bathe one another in oceans of affirmation and praise, as if buttressing one another against some insecurity. Whatever one thinks of the campus protests, the desire for trigger warnings and safe spaces does seem to emanate from a place of emotional fragility. And if you hang around the middle aged, you hear a common story line to explain the rise of the orchid generation. But today, helicopter parents protect their children from setbacks and hardship. There’s a lot of truth to that narrative, but let’s not be too nostalgic for the past. And then many people turned to alcohol to help them feel anything at all. There are moments when they feel swallowed up by fear.

barnesandnoble From the Preface I have always been fascinated by the brilliant theater piece For Colored Girls Who Have Considered Suicide / When the Rainbow Is Enuf, by Ntozake Shange. I was first drawn to this powerful work by its colorful cover, and I fell in love with it when I began to read the powerful prose. As a teenager, it was the title that affected me most. In short, this book is for people of all colors who take a particular approach to education. “The hood” is often identified as a place where dysfunction is prevalent and people need to be saved from themselves and their circumstances. While some may use these statistics to push for more minority teachers, I argue that there must also be a concerted effort to improve the teaching of white teachers who are already teaching in these schools, as well as those who aspire to teach there, to challenge the “white folks’ pedagogy” that is being practiced by teachers of all ethnic and racial backgrounds.

EDITORIAL: What I Said When My White Friend Asked for My Black Opinion on White Privilege | GOOD BLACK NEWS by Lori Lakin Hutcherson, GBN Editor-in-Chief Yesterday I was tagged in a post by an old high school friend, asking me and a few others a very public, direct question about white privilege and racism. I feel compelled not only to publish his query but also my response to it, as it may be a helpful discourse for more than just a handful of folks on Facebook. Here’s his post: “To all of my Black or mixed race FB friends, I must profess a blissful ignorance of this “White Privilege” of which I’m apparently guilty of possessing. So that I may be enlightened, can you please share with me some examples of institutional racism that have made an indelible mark upon you? Here’s my response: Hi, Jason. So, again, I’m glad you asked, because I really want to answer. 1. 2. 3. 4. 5. 6. 7. 8. 9. 10. Okay, Jason, there’s more but I’m exhausted. As to you “being part of the problem,” trust me, nobody is mad at you for being white. With much love and respect, Lori “Got Privilege?” Like this: Like Loading...

10 Diverse Books by YA Authors of Color to Read in 2017 You'll want to read these page-turners. It’s no secret that representation is a big topic in the bookish community. From hashtags like #WeNeedDiverseBooks, founded by Ellen Oh, to #OwnVoices, founded by Corinne Duyvis, writers, agents, and publishers alike have been spreading awareness of how important it is to not only see an accurate depiction of yourself reflected in books, but to read about marginalized characters WRITTEN BY marginalized people. Books written for us, by us, can help eliminate misconceptions and stereotypes in stories. On the flip side, books written for the marginalized, by the marginalized, can add a certain something that someone on the outside may not be able to capture, whether it be a dialect, a personal incident, or a cultural reference. A young person able to see themselves represented in a book helps them realize that they are not alone in the way that they look, feel, believe, and love.

8 YA Books With Latino Protagonists We Wish We Had As Teenagers Adolescence is generally hard for everyone. As young people awkwardly fumble through these formative years, YA novels – which touch on social inequality, sexuality, and identity – can help them navigate this difficult time in their lives. Just last year, the Cooperative Children’s Book Center (CCBC) saw a rise in books about immigrants and refugees – echoing the issues of the real world. But one area that can still see improvement is the representation of Latino characters in books. In 2011, the CCBC – which tracks trends in children and YA literature – found that a little more than 3 percent of the 3,400 books it reviewed were written by or about Latinos. Fast forward a few years to 2016 and the numbers still remain low. 'The Education of Margot Sanchez' by Lilliam Rivera In Lilliam Rivera’s debut YA novel, Margot Sanchez is a South Bronx native who feels the need to keep up with her wealthier private school classmates. 'Mexican WhiteBoy' by Matt de la Pena