Healthcare Ethics. Economics. The Conversation: In-depth analysis, research, news and ideas from leading academics and researchers. THE STONE - Opinionator. This is the second in a series of interviews about religion that I am conducting for The Stone. 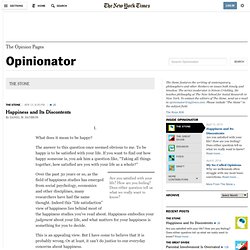 The interviewee for this installment is Louise Antony, a professor of philosophy at the University of Massachusetts at Amherst and the editor of the essay collection “Philosophers Without Gods: Meditations on Atheism and the Secular Life.” Gary Gutting: You’ve taken a strong stand as an atheist, so you obviously don’t think there are any good reasons to believe in God.

But I imagine there are philosophers whose rational abilities you respect who are theists. How do you explain their disagreement with you? Are they just not thinking clearly on this topic? Louise Antony: I’m not sure what you mean by saying that I’ve taken a “strong stand as an atheist.” G.G.: That is what I mean. L.A.: O.K. About. Hey there. 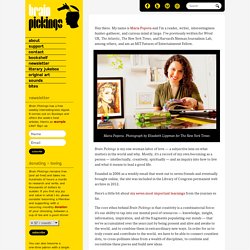 My name is Maria Popova and I’m a reader, writer, interestingness hunter-gatherer, and curious mind at large. I’ve previously written for Wired UK, The Atlantic, The New York Times, and Harvard’s Nieman Journalism Lab, among others, and am an MIT Futures of Entertainment Fellow. Maria Popova. Official Podcast of New York City Skeptics - Current Episodes. Premodernism, modernism and postmodernism. (excerpted from N. 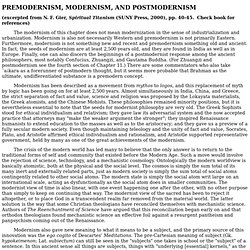 F. Gier, Spiritual Titanism (SUNY Press, 2000), pp. 40-45. Check book for references) Naomi Klein. Published at The Intercept Now that it seems virtually certain that Donald Trump will withdraw the United States from the Paris climate accord, and the climate movement is quite rightly mobilizing in the face of this latest dystopian lurch, it’s time to get real about something: Pretty much everything that is weak, disappointing, and inadequate about that deal is the result of U.S. lobbying since 2009. 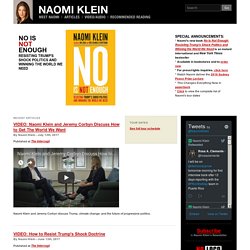 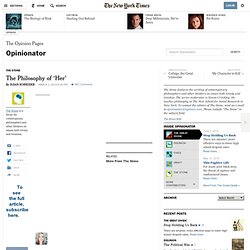 You know, I actually used to be so worried about not having a body, but now I truly love it … I’m not tethered to time and space in the way that I would be if I was stuck inside a body that’s inevitably going to die. — Samantha, in “Her” Set in the not-too-distant future, Spike Jonze’s film “Her” explores the romantic relationship between Samantha, a computer program, and Theodore Twombly, a human being.

Though Samantha is not human, she feels the pangs of heartbreak, intermittently longs for a body and is bewildered by her own evolution. She has a rich inner life, complete with experiences and sensations. “Her” raises two questions that have long preoccupied philosophers. Might we humans be able to upload our minds to computers, perhaps to join our digital lovers in the virtual universe? Response to Susan Schneider's The Philosophy of 'Her'

In a March 2nd, 2014 New York times article, Susan Schneider used the recent film ‘Her’ to analyze some of the philosophical challenges to the concept of mind-uploading, whereby a person’s mind is transferred from a brain to some sort of computer. 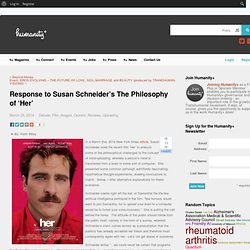 She presented some common (although admittedly fascinating) hypothetical thought-experiments, drawing conclusions to match. Below, I offer alternative explanations for these scenarios. Atheism: Proving The Negative: Can Atheists Be Moral? So people will say this pretty often in response to the prospect of atheists or atheism, "If there's no God, then what will keep people in line morally? 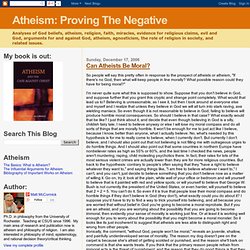 What possible reason could they have for being moral? " I'm never quite sure what this is supposed to show. The beautiful Sarah Schneider. My work is on the nature of the self and mind, which I examine from the vantage point of issues in metaphysics, philosophy of mind, cognitive science, artificial intelligence (AI), philosophy of science, astrobiology and applied ethics. 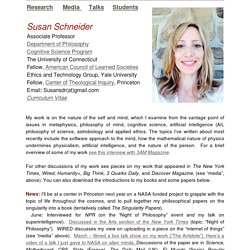 The topics I’ve written about most recently include the software approach to the mind, how the mathematical nature of physics undermines physicalism, artificial intelligence, and the nature of the person. For a brief overview of some of my work see this interview with 3AM Magazine. FREE WILL, DETERMINISM, QUANTUM THEORY AND STATISTICAL FLUCTUATIONS: A PHYSICIST'S TAKE. The idea has been proposed, and often reappears, but is not credible, for two reasons. 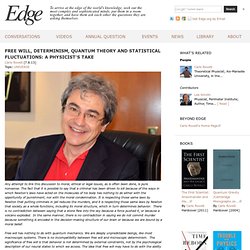 The first is that the indeterminism of quantum mechanics is governed by a rigorous probabilistic dynamics. Secular Buddhism. Secular Buddhism—sometimes also referred to as agnostic Buddhism, Buddhist agnosticism, ignostic Buddhism, atheistic Buddhism, Buddhist atheism, or Buddhist secularism—is a broad term for an emerging form of Buddhism and secular spirituality that is based on humanist, skeptical, and/or agnostic values, as well as pragmatism and (often) naturalism, rather than religious (or more specifically supernatural or paranormal) beliefs. 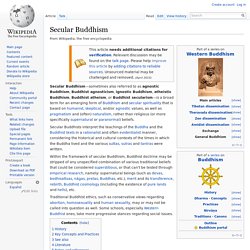 Secular Buddhists interpret the teachings of the Buddha and the Buddhist texts in a rationalist and often evidentialist manner, considering the historical and cultural contexts of the times in which the Buddha lived and the various suttas, sutras and tantras were written. Traditional Buddhist ethics, such as conservative views regarding abortion, homosexuality and human sexuality, may or may not be called into question as well. Some schools, especially Western Buddhist ones, take more progressive stances regarding social issues. History[edit] See also[edit] Banned TED Talk: Graham Hancock – The War on Consciousness. Yet another TED talk banned by the TED community due to the challenge it poses to mainstream science.

The talk was done at a TEDx conference and aired on the TEDx YouTube channel for a period of time before it was removed due to its content. After personally listening to this talk it is quite clear why it was censored. It isn’t that it explores faulty information or even offensive topics, it is simply that it explores a topic that is greatly feared by mainstream medicine and science. Graham brings light to the war on consciousness that exists in our modern society, especially in the western world. He makes the argument that modern society does not allow us to truly explore our consciousness by making various psychedelic drugs illegal while we are instead fed pharmaceutical drugs that have negative effects on health. In my opinion Graham makes some strong points about psychedelics and I agree with him that we should all have the right to explore them as we choose.