Medieval peasants got more vacation time than you 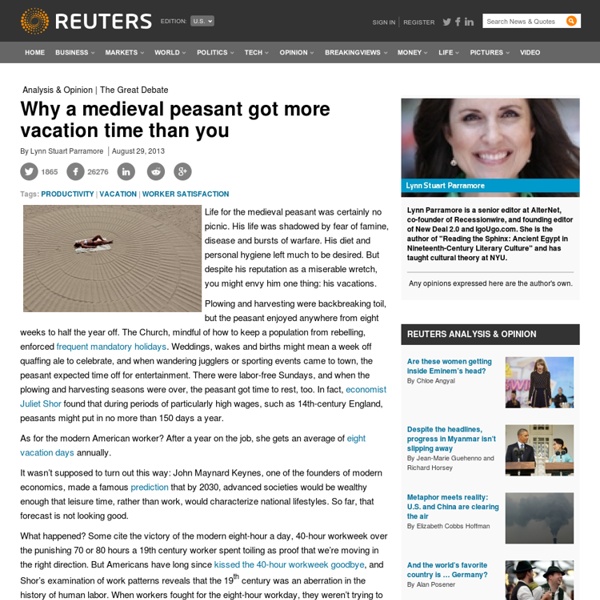 Life for the medieval peasant was certainly no picnic. His life was shadowed by fear of famine, disease and bursts of warfare. His diet and personal hygiene left much to be desired. But despite his reputation as a miserable wretch, you might envy him one thing: his vacations. Plowing and harvesting were backbreaking toil, but the peasant enjoyed anywhere from eight weeks to half the year off. The Church, mindful of how to keep a population from rebelling, enforced frequent mandatory holidays. As for the modern American worker? It wasn’t supposed to turn out this way: John Maynard Keynes, one of the founders of modern economics, made a famous prediction that by 2030, advanced societies would be wealthy enough that leisure time, rather than work, would characterize national lifestyles. What happened? Fast-forward to the 21st century, and the U.S. is the only advanced country with no national vacation policy whatsoever. Some blame the American worker for not taking what is her due.

Asia was settled in multiple waves of migration, DNA study suggests An international team of researchers studying DNA patterns from modern and archaic humans has uncovered new clues about the movement and intermixing of populations more than 40,000 years ago in Asia. Using state-of-the-art genome analysis methods, scientists from Harvard Medical School and the Max Planck Institute for Evolutionary Anthropology in Leipzig, Germany, have found that Denisovans -- a recently identified group of archaic humans whose DNA was extracted last year from a finger bone excavated in Siberia -- contributed DNA not just to present-day New Guineans, but also to aboriginal Australian and Philippine populations. The study demonstrates that contrary to the findings of the largest previous genetic studies, modern humans settled Asia in more than one migration. The study also provides new insights about where the ancient Denisovans lived. The findings appear on September 22 in the American Journal of Human Genetics. Genetic footprints The researchers concluded that:

China History: Chronology, Dynasty Qin Han Tang Song Yuan Ming Qing China, one of the countries that can boast of an ancient civilization, has a long and mysterious history - almost 5,000 years of it! Like most other great civilizations of the world, China can trace her culture back to a blend of small original tribes which have expanded till they became the great country we have today. It is recorded that Yuanmou man is the oldest hominoid in China and the oldest dynasty is Xia Dynasty. Chinese society has progressed through five major stages - Primitive Society, Slave Society, Feudal Society, Semi-feudal and Semi-colonial Society, and Socialist Society. Chinese History Chronology Ancestral Lines Evolutionary biologists use a cladogram, the treelike diagram of evolutionary branches or clades, to organize species into lines of evolutionary descent across time. Biologists use three types of evidence to deduce evolutionary connections: genetics, morphology, and geologic dating. (Behavior, normally a key part of evolutionary studies, can only be inferred in extinct species — for example, by examining the ecology in which the species flourished and the species adaptations for eating and locomotion.) Analyses of primate fossils and the genetic relatedness of living primates converge to the conclusion that humans and chimpanzees branched from a common ancestor about 7 million years ago. The rest of the puzzle must be deduced from morphology (physical form, as reconstructed from the bones) and geologic dating. The cladogram for human evolution shown above currently lacks key pieces of evidence. These are some of the most interesting but currently unanswered questions about human descent:

What America’s immigrants looked like when they arrived on Ellis Island We hear so often that America is "a nation of immigrants" or a "cultural mixing pot" that the phrase has become kind of a tired cliche. But actually seeing that history is a different story. The fascinating photographs below -- of people in their native costume passing through Ellis Island in the early 20th Century -- hint at just how incredible and unique America's history is as a nation of immigrants. These photos were taken by Augustus Sherman, an amateur photographer who worked as the chief registry clerk on Ellis Island from 1892 until 1925. Sherman snapped these photographs of people passing through customs in their native costume. New York began using Ellis Island as a way station for immigrants on Jan. 1, 1892, and between then and 1954, more than 12 million immigrants used the island to enter the U.S. The history of the island is not always a happy one: It also reflects deep racism and ethnic divisions. Here is a young German man, who the notes classify as a "stowaway":

Ancient Origins | Reconstructing the story of humanity's past Encyclopedia of Earth Studies Find Mysterious Link Between Native Americans And Indigenous Australasians Native Americans who live between the Artic and the southern tip of Chile are thought to have descended from Siberians who crossed the Bering land bridge from the Asian continent some 15,000 years ago. They are the so-called First Americans. But was there just one migration wave or were there multiple founding populations? Two major papers published this week take completely different views, though they’re now working together to see if their data and interpretations can be reconciled. Both studies uncovered a genetic link between Native Americans living in the Amazon today and indigenous groups in Australasia, which includes Australia, New Guinea, and nearby islands in the Pacific. Origins and population history of Native Americans based on Raghavan et al. They estimate that ancestral Native Americans migrated from Siberia to the Americas no earlier than 23,000 years ago. Deep genetic affinities between Amazonian populations in South America and Australasians. Photo Gallery

Better Identification of Viking Corpses Reveals: Half of the Warriors Were Female Shield maidens are not a myth! A recent archaeological discovery has shattered the stereotype of exclusively male Viking warriors sailing out to war while their long-suffering wives wait at home with baby Vikings. (We knew it! We always knew it.) Plus, some other findings are challenging that whole “rape and pillage” thing, too. Researchers at the University of Western Australia decided to revamp the way they studied Viking remains. It’s been so difficult for people to envision women’s historical contributions as solely getting married and dying in childbirth, but you can’t argue with numbers—and fifty/fifty is pretty damn good. Women may have accompanied male Vikings in those early invasions of England, in much greater numbers than scholars earlier supposed, (Researcher) McLeod concludes. In many ways, this discovery is well-timed with the recent uproar over Thor becoming a title for both sexes instead of an exclusively male name.

Have You Heard of The Great Forgetting? It Happened 10,000 Years Ago & Completely Affects Your Life By Deep Ecology Hub / deep-ecology-hub.com/ Jan 23, 2014 This article summarizes the ideas of Daniel Quinn, first written about in The Story of B, which was a sequel to Ishmael. The longer, original essay can be read here, and comes highly recommended, especially if you find yourself disagreeing with the summary below. Most disagreements we've read about have turned out to be misunderstandings, so please check the original before coming to conclusions. The Great Forgetting refers to the wealth of knowledge that our culture lost when we adopted our new civilized lifestyle. The Great Forgetting accounts for an enormous cultural collapse as once tribal people found themselves in a new and strange mass centralized society. It is only recently that the Great Forgetting has been exposed. How The Great Forgetting Took Place It began around 10,000 years ago when one culture in the Near East adopted a new way of life that humans had not tried before. The Philosophical Roots of Our Culture

From Angkor Wat to Stonehenge: How Ancient People Moved Mountains Jane J. Lee The temple of Angkor Wat, the Egyptian pyramids, Stonehenge, and the famous statues on Easter Island were all built without the conveniences of modern technology. In some cases, all they needed was rope, a little manpower, and some ingenious carving. A new study published this week in the journal Proceedings of the National Academy of Sciences finds that ice roads lubricated with water enabled workers in 15th- and 16th-century China to slide stone blocks to Beijing in order to build palaces in the Forbidden City. Making nature work for them is a common theme in the techniques experts think ancient peoples used to build their monuments and temples. "We forget that ancient people are just as smart as we are," said Terry Hunt, an archaeologist at the University of Oregon who studies the Polynesian culture of Easter Island. Easter Island Statues When Polynesians first arrived on Easter Island—or Rapa Nui—in the 1200s, they brought the practice with them. Temple of Angkor Wat

Genocide of indigenous peoples Genocide of indigenous peoples is the genocidal destruction of indigenous peoples, understood as ethnic minorities whose territory has been occupied by colonial expansion or the formation of a nation state,[Note 1] by a dominant political group such as a colonial power or a nation state. While the concept of genocide was formulated by Raphael Lemkin in the mid-20th century, acts of genocidal violence against indigenous groups frequently occurred in the Americas, Australia, Africa and Asia with the expansion of various European colonial powers such as the Spanish and British empires, and the subsequent establishment of nation states on indigenous territory. According to Lemkin, colonization was in itself "intrinsically genocidal". He saw this genocide as a two-stage process, the first being the destruction of the indigenous population's way of life. In the second stage, the newcomers impose their way of life on the minority group. Genocide debate[edit] (a) Killing members of the group;