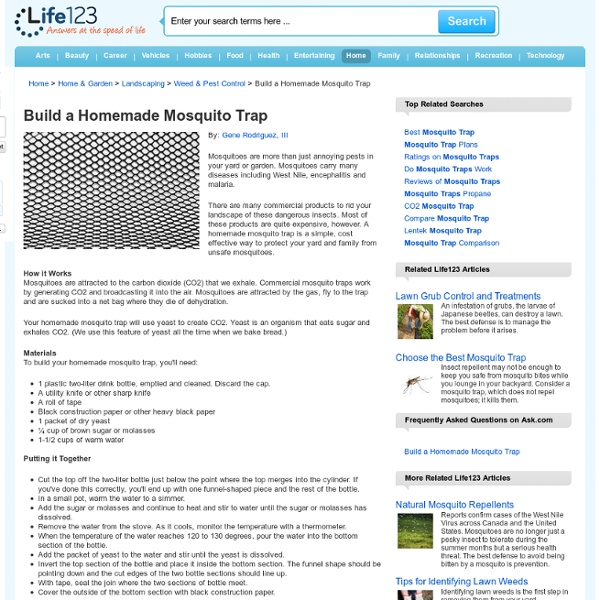 Mosquitoes are more than just annoying pests in your yard or garden. Mosquitoes carry many diseases including West Nile, encephalitis and malaria. There are many commercial products to rid your landscape of these dangerous insects. Most of these products are quite expensive, however. How it WorksMosquitoes are attracted to the carbon dioxide (CO2) that we exhale. Your homemade mosquito trap will use yeast to create CO2. MaterialsTo build your homemade mosquito trap, you'll need: 1 plastic two-liter drink bottle, emptied and cleaned. Putting it Together Cut the top off the two-liter bottle just below the point where the top merges into the cylinder. Using The TrapYour homemade mosquito trap will work indoors or out. You'll need to replace the yeast mixture about every two weeks. The trap can be made more effective by taping an Octenol or Lurex mosquito lure to the inside of the bottom section of the bottle before sealing.

12 Awesome Home Organization Ideas People usually say that “there’s no place like home”. Well, we’d rather say that there’s no better place to live than a clean and organized house. Yeah, we know: it seems like we’re making chit chat and talking about something that everyone already knows. The thing is that we know great home organization secrets and applying them to your house can spare you a lot of time, time you can spend relaxing. 1. Have you ever thought about this option? 2. This one is a ‘do it yourself’ kind of tip. 3. Another tip that’s so easy to do and apply to any home. 4. Another great idea! 5. Do you hate to see your office supplies and generic “junk” lying around? 6. Usually, garages are filled with clutter and things we don’t use, so every little inch of the floor is occupied. 7. Cool idea… Imagine that, for some reason, you have extra shower curtain rings lying around. 8. The pegboard is a classic. 9. 10. Empty paint cans are great for organizing purposes. 11. 12.

Blood and Ink: Front Pages From the Civil War 1860 edition of the Charleston Mercury. South Carolina was the first state to secede from the Union. (Newseum collection) 1861 "Extra" edition of the New York Illustrated News devoted to events at Fort Sumter and Fort Moultrie. 1862 edition of The Union Sentinel, a handwritten newspaper published on lined notepaper by students in Warren, Conn. 1863 edition of the Union-occupation newspaper Stars and Stripes printed on wallpaper. 1864 illustrated edition of Harper's Weekly. 1864 "Extra" edition of the Atlanta Daily Intelligencer detailing the capture and burning of Atlanta. Location: Mezzanine Level WASHINGTON — Experience the story of the Civil War as Americans in the 1860s did — through the front pages of newspapers. "Blood and Ink: Front Pages From the Civil War" showcases more than 30 historic front pages from the Newseum collection spanning the length of the war, from the birth of the Confederacy to the death of President Abraham Lincoln.

Japanese Chosera Waterstones by Naniwa at Tools for Working Wood Traditionally sword polishers and the most accomplished Japanese knife sharpeners have always preferred natural waterstones. But the best natural waterstones come from age-old quarries that are largely exhausted. Naniwa has always strived for their artificial waterstones to have a very natural feel, and their Chosera stones are their top-of-the line stones. These are the best, fastest cutting waterstones we have ever seen. However what really attracted us to the stones is the feel of the stone on the steel as you sharpen. At our request, the factory is packaging these stones without bases to that they will fit in any existing sharpening jig you use, and so that you can easily use the both sides and the edge of the stone. The Chosera stones come in six grits: 400,1000,2000, 3000,5000, and 10K. . 8 1/4" x 2 3/4" (210 mm x 70 mm) and 1" (25 mm) thick. While we wax euphoric about the 10K we don’t want people to ignore the coarser grits. We understand these stones are not for everyone.

Secession" Secession, the withdrawal of part of a country or state from the central government's control. The withdrawal may be carried out peacefully or violently. Political conflicts that lead to secession are usually based on economic, cultural, or religious differences. In United States history the question of secession arose several times before the Civil War, but the term generally refers to the withdrawal of the Southern states from the Union in 1860–61. Secession has also been an issue in other countries. In the United States From the time the U.S. In 1803–04 a small number of New England Federalists, facing decreased political power as a result of the admission of Southern states to the Union, proposed a separate nation to be called the Northeastern Confederacy. To many Southerners the election to the Presidency in 1860 of Abraham Lincoln, who won with exclusively Northern support, placed in jeopardy both slavery and states' rights.