Hopes&Fears — Life and culture through a global lens 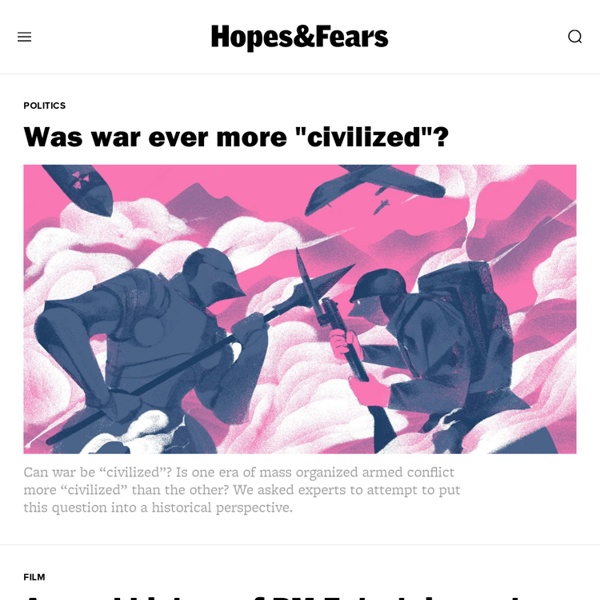 Related:  Of Various Interests and Possibly beyond the Pale • For Living Websites • unclassified

START HERE Interested in conspiracy theories, the occult, and Illuminati symbolism? Would you like to learn more about these secret mysteries and decode the symbolism that is ubiquitous in our daily lives? At IlluminatiWatcher.com Isaac Weishaupt explores these various controversial themes and exposes the agenda and manipulation all around us.

The Inner Forms the Outer - Parabola Photograph by Lee van Laer Human beings are peculiar creatures. We can think; and it sets us apart from other creatures, who can think some (consider the honeybee) but not much. Humans are still evolving and we don’t know what will happen next — Hopes&Fears — flow "Science" From H.G. Well’s grim terrestrial morlocks to Wall-E’s corpulent floating hedonists to the X-Men with flashy superpowers, it's tempting to speculate where we might end up in the future. Stephen Stearns, a professor of ecology and evolutionary biology at Yale, was quick to point out how little we can predict about our future. Both our shift to agrarian lifestyles (8,000-10,000 years ago) and the Industrial Revolution were marked by major shifts in diet, exposure to infectious disease, and risks of chronic disease. “We know that culture (agriculture, medicine, technology) now changes much faster than genes and traits can evolve,” he tells us, before adding, “We have therefore entered an era in which we are going to be permanently mismatched to a rapidly changing environment for as long as we can foresee.”

PAVE PARADISE "I certainly want [my readers] to think like scientists – to think critically, skeptically – but I also want them to be imbued with the poetry of the universe, the poetry of reality, which is what science is." Richard Dawkins, echoing the famous words of Richard Feynman and Carl Sagan, in this great BBC 4 Radio interview. Also see Dawkins’s The Magic of Reality, a children’s book debunking religious mythology with the awe of science. Took the words right outta my mouth, Richard!! -J (via jtotheizzoe)

Strange Attractor The Tarot Deck of Austin Osman SpareEds. Jonathan Allen & Mark Pilkington256 pages, hardback, 233mm x 174mmFully illustrated in colour. • Standard edition £30, inc. The School of Life - Developing Emotional Intelligence Know Yourself Prompt Cards These cards are designed to assist us in a journey of self-knowledge; they present us with a range of ideas and questions that can help us to understand ourselves better. £10 Gift E-Voucher An original gift, delivered instantly by email. This electronic voucher can be used across any of our London events or spent in The School of Life online or London shops. £25, £50 or £100. Writing as Therapy Journals Writing is ultimately the task of discovering and developing what we think. There could hardly be a more important personal goal. £15 each.

Six Ways the Media Has Misreported Syria As in the case of Libya, from NY Times to Fox News, from Guardian to National Post and from Le Monde to Le Figaro, the Western mainstream media’s coverage of the Syrian conflict has been mostly simplistic and black & white with a Hollywoodian good (opposition) and evil (Syrian government) story. The basic storyline reported is: “The dictatorial Syrian government is torturing and killing Syrian protestors and civilians including women and children and that the Western counties and the Arab League want to protect these Syrian civilians”. These outlets use any information that supports their stance regardless of its source and quality, and dismiss or ignore any information that brings it to question. The bloody suppression of protestors by the Syrian government and also instability resulting from the armed insurgency aggravated by a complex set of foreign forces, each with its own set of vested interests, have resulted in significant suffering for the people of Syria.

Saint Red by James L. Weaver As he lay sleeping atop his bed; made of pages from newspapers, rags, and magazines, some of which date back as far as 2004, the man was aware of, but not concerned about, the various speck-sized mites and infestations going about their cyclical lives; dwelling, feeding, breeding, and dying, on, or under his course, dry, encrusted skin; like some microscopic group of circus performers under the protection of a rotting tent of burlap, which had served as the man's clothing for the past several years. The verminous burlap, which he fashioned from two coffee bean sacks; cutting holes for his head, arms and feet, and tied at the waist, appearing as a serape, with skirt-like "pants". These, he never actually changed or discarded, but instead, only added to, whenever a portion, usually the urine-soaked front, or the ass-end of the skirt-like "pants", literally rotted through, before falling off him.