Protein in the Vegan Diet 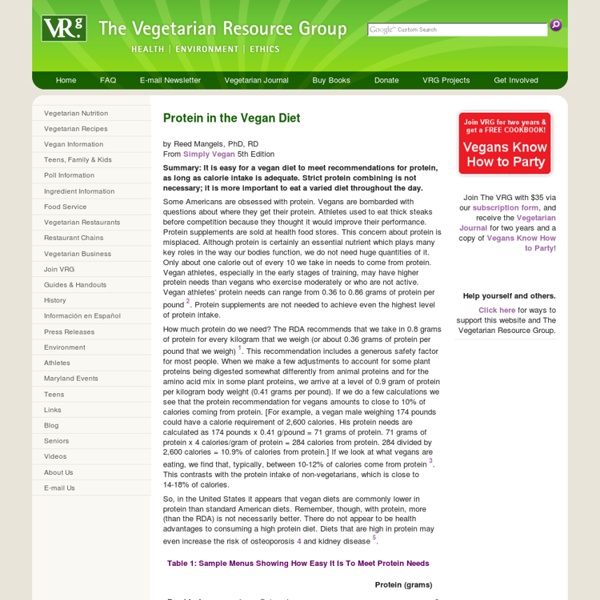 by Reed Mangels, PhD, RD From Simply Vegan 5th Edition Summary: It is easy for a vegan diet to meet recommendations for protein, as long as calorie intake is adequate. Strict protein combining is not necessary; it is more important to eat a varied diet throughout the day. Some Americans are obsessed with protein. How much protein do we need? So, in the United States it appears that vegan diets are commonly lower in protein than standard American diets. Table 2 shows the amount of protein in various vegan foods and also the number of grams of protein per 100 calories. It is very easy for a vegan diet to meet the recommendations for protein. What about combining or complementing protein? Some people say that eggs, cow’s milk, meat, and fish are high quality protein. Frances Moore Lappe, in her book Diet for a Small Planet 6 advocated the combining of a food low in one amino acid with another food containing large amounts of that amino acid. Food and Nutrition Board, Institute of Medicine.

» A Guide to Eating a Plant-Based Diet Post written by Leo Babauta. If I could make a single dietary recommendation to people looking to get healthier, it would be to move to a plant-based diet. Eating plants has been the best change I’ve made in my diet — and I’ve made a bunch of them, from intermittent fasting to low-carb experiments to eating 6 meals a day to eating almost all protein to eliminating sugar (all at various times). Plants have made me slimmer, healthier, stronger, more energetic — and have increased my life expectancy (more on all this below). Of course, the diet is simple, but moving away from the Standard American Diet to a plant-based one isn’t always so simple for most people. Changing your diet can be difficult, but in this guide I’ll share a bit about how to change, talk a bit about why, and what you might eat. What’s a Plant-Based Diet? The simple answer, of course, is that you eat plants. Why Should I Change? There are a few important reasons to eat plants: Health. How to Change Slowly cut out meat. A: No.

I Can't Believe It's Vegan Being vegan doesn't mean you have to eat wheatgrass and alfalfa sprouts. Most grocery stores carry an array of great-tasting vegan options. Many products, including fantastic faux franks, veggie burgers, chicken-free chicken patties, flavored soy milks, nondairy ice creams, and other sensational soy-based snacks, are marketed to vegetarians and vegans. There's also an abundance of chips, dips, cookies, candies, frozen pies, soups, and other mouth-watering items by mainstream food manufacturers that are also vegan. Take a stroll through your local grocery store, check some ingredients, and you'll see what we mean. Click here for a printable version of the list Breakfast | Beverages | Snacks | Condiments | Baked Goods | Refrigerated and Frozen foods | Baking | Staples Breakfast (Dry)

8 Vegetarian Athletes Martina Navratilova She has been a vegetarian for many years. Her record is one of the most impressive in professional sports. She won 18 Grand Slam titles, 31 Grand Slam women’s doubles titles, and 10 Grand Slam mixed doubles titles. She even won a Wimbledon doubles title at the age of forty-six. Phil Mickelson A three-time Master’s champion, and one of the best in the game of golf, recently he turned vegetarian in order to help combat a condition he has been suffering from called psoriatic arthritis. Carl Lewis One of the most celebrated Olympians and most decorated track and field athletes in history. Joe Namath He won a Super Bowl and was a fan favorite NFL quarterback. Mac Danzig A vegan mixed martial arts fighter who says not eating meat doesn’t hurt his performance at all. Prince Fielder A professional baseball player who stopped eating meat, he says going vegetarian made him feel better and more energetic. Brendan Brazier Robert Cheeke Related Links

See, This Is Why People Hate Vegans I hate passive aggression, so I love passiveaggressivenotes.com. It's been one of my favorite time-wasting sites for years now. My friend Linda sent me a link to this recent installment, in which a self-righteous vegan leaves her omnivorous roommate a (not so passive aggressive) note, making ridiculous impositions. In case you can't make it through the whole thing, here are a couple quotations: "I can no longer tolerate seeing meat, eggs, dairy, honey, or any other products from animals in our kitchen or anywhere else in the apartment. "You could at the very least eat these things away from me, like when you're out of the house. As a vegan, I am embarrassed by things like this. The appalled reactions in the comments section reflect the damage done. I don't want people to hate vegans.

Tippin' my hat to the Vegan Men on Twitter | Your Daily Vegan TGIFF (Thank Goodness it’s Follow Friday)! I decided after today’s twitter conversation about men on twitter that I’d dedicate this weeks spotlight to the vegan men on twitter. (Did you catch it? So here’s to you- the vegan men of twitter, you freaking rock! [box style="none"] Name: Kyle Domer aka @VeganVagrant Self-proclaimed bio: Don’t let the name fool you. You should know that: “While I originally got into veganism for selfish (health) reasons, I have now come to fully embrace and support the animal rights and even environmental aspects of it. You can check out Vegan Vagrant at www.veganvagrant.com Follow Vegan Vagrant: [/box] Name: Brian aka @CrabbyVegan Self-proclaimed bio: Vegan, or trying to become Vegan. You should know that: “This is the close of my 10th month of veganism, and suffice it to say its still about as hard now as it has been from the beginning. You can check out One Crabby Vegan at Follow Crabby Vegan: [/box] Follow Soymilk Gun:

Kathy Freston: Vegan Food in Restaurants: The Changing Tide of Food Preferences (Listen Up, Restaurants!) First off, let me tell you that I'm a friendly vegan! I'm not judgmental, and I truly believe that it's not my business to tell anyone what they should or shouldn't eat. I grew up in the South, greatly enjoying chicken-fried steak and barbecued ribs, and every kind of cheesy thing I could get my hands on. I loved meat; never thought about it. Until I thought about it. After a few years of transitioning, I've been vegan for seven years. I went out to dinner last night with friends and came home fairly hungry. I would SO love a hearty dish with a center of the plate protein, with some TLC from the chef -- i.e. sauces and garnishes -- to make it just as fulfilling as the meat and dairy dishes. Eating vegan(ish) or vegetarian is mainstream now, and growing ever more so. I realize that vegan is not how the majority of people eat, and restaurants are in the business of giving their customers what they want, but the trend is quite assuredly moving toward reducing and replacing meat.

The Thanksgiving Day Massacre: A House of Horrors I know many of you have heard this question over and over again, "Why kill turkeys to celebrate thanksgiving?" They say repetition is boring conversation but I feel it's essential to ask this question repeatedly, because there really is no reason at all to slaughter sentient beings in the name of a holiday, and turkeys surely are sentient beings (see also ). Dr, Ian Duncan, a world renowned expert on the behavior of food animals notes, based on detailed scientific research, " It is indisputable that poultry are capable of feeling pain . All poultry species are sentient vertebrates and all the available evidence shows that they have a very similar range of feelings as mammalian species. A magnificent wild turkey Holidays should be times for deep reflection. There are numerous tasty non-animal alternatives and even if you don't think they're as yummy as a dead bird is it really asking too much to give up something that isn't a necesssary part of your diet?

What Top 3 Vegan Energy & Protein Bars Have the Longest Shelf Life and Taste the Best | Vegan Valor I love me some good n’ tasty vegan energy bars. There is no great snack for a vegan in a hurry or in a rush than a yummy vegan protein bar tucked away conveniently in purse or pocket. Well, maybe there’s the ol’ ziploc bag of grass and lettuce. That’s a shout out to my ignorant omnivorous friends who think that’s what vegans eat. Anyway, I want to offer you my 3 top vegan protein and vegan energy bars today in order of best to 3rd best. It ain’t the end of the world despite what the Mayans and other cracker jacks are trying to tell you. You can buy many of these protein bars and meal replacement bars in chocolate, so it’s almost like having a tasty little vegan chocolate bar. Okay, enough with the gangsta talk. 1. My favorite vegan Clif Bar is the crunchy peanut butter. Why do I like the vegan Clif Bars? Many of these Clif Bars are also suitable for folks who have wheat allergies. The Clif Bar Builder’s Bar are great too. You can check out the Builder’s Bars here. 3. Summary

A Vegan Misconception | Your Daily Vegan A vegan is a vegan is a vegan….right? Well, not exactly. See, there are people who eat vegan and then there are people who are vegan. Don’t get your hackles up, I’m not about to start bashing people. I, for one, am happy to see it addressed on so many vegan blogs. And we cannot affect change if we can’t even agree on what veganism is. Being vegan means that you reject the use of animals, and that extends into every aspect of your life. One of the biggest controversy in the vegan world is over honey. Mass Produced “Natural” Honey can never be vegan If you set aside your morals and ethics, other people will too. Don’t get me wrong, being vegan doesn’t mean that you are perfect. One more thing, it’s okay to ask someone to go vegan. What will you do with your vegan power? Put down your forks, quit apologizing, and stay vegan. A no uttered from the deepest conviction is better than a yes merely uttered to please, or worse, to avoid trouble. ~ Gandhi

The Rise of the Power Vegans It used to be easy for moguls to flaunt their power. All they had to do was renovate the chalet in St. Moritz, buy the latest Gulfstream (GD) jet, lay off 5,000 employees, or marry a much younger Asian woman. By now, though, they've used up all the easy ways to distinguish themselves from the rest of us—which may be why a growing number of America's most powerful bosses have become vegan. Steve Wynn, Mort Zuckerman, Russell Simmons, and Bill Clinton are now using tempeh to assert their superiority. As are Ford Executive Chairman of the Board Bill Ford (F), Twitter co-founder Biz Stone, venture capitalist Joi Ito, Whole Foods Market (WFMI) Chief Executive Officer John Mackey, and Mike Tyson. It shouldn't be surprising that so many CEOs are shunning meat, dairy, and eggs: It's an exclusive club. "CEOs are smart. Wynn agrees. Though he swears it's not a condition of employment, Wynn has persuaded most of his senior management to go vegan. This is how most guys go vegan.