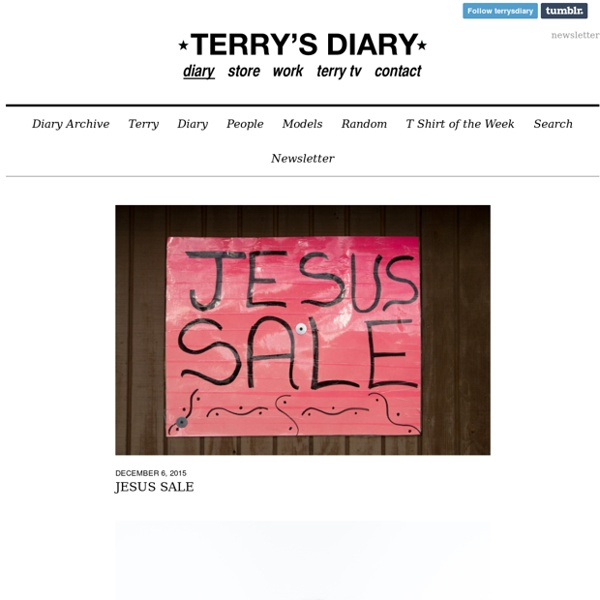 inner believer inner believer » personal Archive Subscribe Talk to me cause i'm lonely 473 notes (Source: justbreatheandlive-yeah, via telepathicmagic) 654 notes William Klein (photographer) William Klein (born April 19, 1928) is an American-born French photographer and filmmaker noted for his ironic approach[1][2] to both media and his extensive use of unusual photographic techniques in the context of photojournalism and fashion photography.[1] He was ranked 25th on Professional Photographer's list of 100 most influential photographers.[3] Klein has directed numerous short and feature-length documentaries and has produced over 250 television commercials.[5] Though American by birth, Klein has lived and worked in France since his late teens. His work has sometimes been openly critical of American society and foreign policy; the film critic Jonathan Rosenbaum once wrote that Klein's 1968 satire Mr. Freedom was "conceivably the most anti-American movie ever made

PhotoSpace Next PhotoSpace A photo space for inspiration! 0 notes 0 notes Portland Engagement Photography « Katy Weaver Photography Picture classic, young, American love. You might be thinking about The Notebook. But Anna and Jake would probably give you a run for your money. Seriously though. They met during high school through their church. They fell in love. news - I LIKE PHOTO Group Talented make up artist Aneta Kostrzewa from I Like Photo teams up with photographer Adam Plucinski for new Polish Harpers Bazaar fashion story with top model Magdalena Jasek. See more Hugo Jaeger Hugo Jaeger was the former personal photographer of Adolf Hitler. He travelled with Hitler in the years leading up to and throughout World War II and took around 2,000 colour photographs of the Austrian-born German politician. Jaeger was one of the few photographers who were using color photography techniques at the time.[1] Career[edit]

LIFE LIFE legend Lauren Bacall was born 93 years ago today on Sept. 15, 1924 in The Bronx, New York. She is pictured here in 1945 exuding “The Look” next to a phonograph in front of fireplace (with a photograph of herself on the mantle). (Ralph Crane—The LIFE Images Collection/Getty Images) #LIFElegends #LaurenBacall From the “LIFE goes to a Party” series, in 1942, photographer Herbert Gehr went to a Labor Day weekend at a country club in Columbus, Ohio. According to LIFE, this was newsworthy because Country Clubs were becoming casualties of the war effort. “The loss of the country club as a war casualty will be hardest felt in the Midwest, where it compensates for the lack of easily accessible lakes and rivers and mountains, and provides a natural gathering point for family and friends bent on recreation and relaxation.”

Levitation Photography: 65 Stunning Examples & Tutorials Many says floating in the air, or so called levitation is impossible. Well, in fact everything is possible, all you need to do is believe yourself, seriously, believe that you can achieve it! And uh, believe that the Photoshop can help you achieve it. David Bailey David Royston Bailey, CBE (born 2 January 1938) is an English photographer, regarded as one of the nation's best.[1][2] Early life[edit] David Bailey was born in Leytonstone, East London,[4] to Herbert Bailey, a tailor's cutter, and his wife, Gladys, a machinist. From the age of three he lived in East Ham.[5] "In the winter", he recalled, the family "would take bread-and-jam sandwiches and go to the cinema every night because in those days it was cheaper to go to the cinema than to put on the gas fire. I'll bet I saw seven or eight movies a week

bits&bites " Between the demand to be clear,and the temptation to be obscure, impossible to decide which deserves more respect." E.M.Cioran Hello & welcome to my little queerdome! If you like what you see, do visit : queerest of them all & turnofthecentury & oh!so 30s & Studio Manasse & Nazimova & belgradestreetart [not so] occasionally i check out nomoreheroes as well. Ellen von Unwerth Ellen von Unwerth, Paris 2003 Ellen von Unwerth (born 1954 in Frankfurt, Germany) is a photographer and director, specializing in erotic femininity. She worked as a fashion model for ten years herself before moving behind the camera, and now makes fashion, editorial, and advertising photographs. Von Unwerth has also directed short films for fashion designers, and music videos for several pop musicians. She has directed many commercials and web films for top brands like Revlon, Clinique, Equinox and others, many featuring celebrities. Books[edit]