The Shortness of Life: Seneca on Busyness and the Art of Living Wide Rather Than Living Long 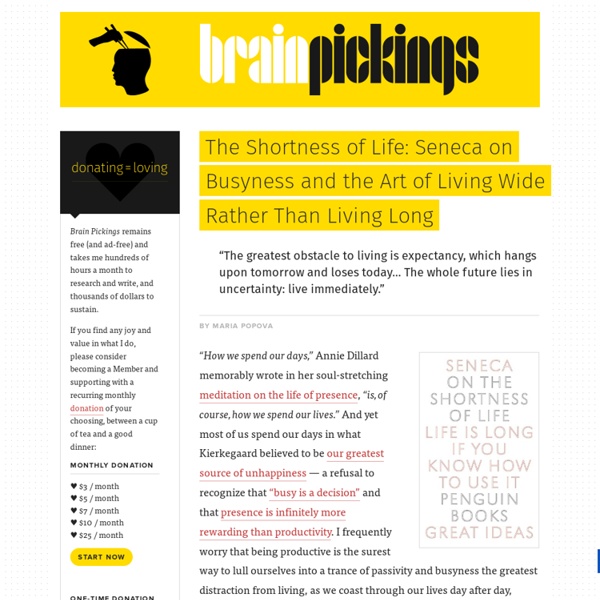 “How we spend our days,” Annie Dillard memorably wrote in her soul-stretching meditation on the life of presence, “is, of course, how we spend our lives.” And yet most of us spend our days in what Kierkegaard believed to be our greatest source of unhappiness — a refusal to recognize that “busy is a decision” and that presence is infinitely more rewarding than productivity. I frequently worry that being productive is the surest way to lull ourselves into a trance of passivity and busyness the greatest distraction from living, as we coast through our lives day after day, showing up for our obligations but being absent from our selves, mistaking the doing for the being. Despite a steadily swelling human life expectancy, these concerns seem more urgent than ever — and yet they are hardly unique to our age. In fact, they go as far back as the record of human experience and endeavor. Seneca writes: It is not that we have a short time to live, but that we waste a lot of it. Thanks, Liz

How Trigger Warnings Are Hurting Mental Health on Campus Something strange is happening at America’s colleges and universities. A movement is arising, undirected and driven largely by students, to scrub campuses clean of words, ideas, and subjects that might cause discomfort or give offense. Last December, Jeannie Suk wrote in an online article for The New Yorker about law students asking her fellow professors at Harvard not to teach rape law—or, in one case, even use the word violate (as in “that violates the law”) lest it cause students distress. In February, Laura Kipnis, a professor at Northwestern University, wrote an essay in The Chronicle of Higher Education describing a new campus politics of sexual paranoia—and was then subjected to a long investigation after students who were offended by the article and by a tweet she’d sent filed Title IX complaints against her. In June, a professor protecting himself with a pseudonym wrote an essay for Vox describing how gingerly he now has to teach. How Did We Get Here?

How to Live: Lessons from Montaigne, Godfather of Blogging by Maria Popova Don’t worry about death, pay attention, read a lot, give up control, embrace imperfection. “Living has yet to be generally recognized as one of the arts,” Karl De Schweinitz wrote in his 1924 guide to the art of living. But this is an art best understood not as a set of prescriptive techniques but, per Susan Sontag’s definition of art, a form of consciousness — which means an understanding that is constantly evolving. This idea — writing about oneself to create a mirror in which other people recognize their own humanity — has not existed forever. Anaïs Nin on Embracing the Unfamiliar We’ve already seen that life is about living the questions, that the unknown is what drives science, and that the most beautiful experience we can have is the mysterious. John Keats wrote of this art of remaining in doubt “without any irritable reaching after fact & reason” and famously termed it “negative capability.” But count on Anaïs Nin to articulate familiar truths in the most exquisitely poetic way possible, peeling away at the most profound and aspirational aspects of what it means to be human.

A Message to the People-Pleasers: You are not Helping Anyone. What would you say takes up the vast majority of our time—mental space and energy? Work? Parenting? Bill-paying? How to Be Alone: An Antidote to One of the Central Anxieties and Greatest Paradoxes of Our Time by Maria Popova “We live in a society which sees high self-esteem as a proof of well-being, but we do not want to be intimate with this admirable and desirable person.” If the odds of finding one’s soul mate are so dreadfully dismal and the secret of lasting love is largely a matter of concession, is it any wonder that a growing number of people choose to go solo? The choice of solitude, of active aloneness, has relevance not only to romance but to all human bonds — even Emerson, perhaps the most eloquent champion of friendship in the English language, lived a significant portion of his life in active solitude, the very state that enabled him to produce his enduring essays and journals. And yet that choice is one our culture treats with equal parts apprehension and contempt, particularly in our age of fetishistic connectivity.

5 Ways To Turn Fear Into Fuel Editor’s note: This is a guest post from Jonathan Fields, author of Uncertainty: Turning Fear and Doubt Into Fuel for Brilliance. Uncertainty. It’s a terrifying word. Living with it, dangling over your head like the sword of Damocles, day in day out, is enough to send anyone spiraling into a state of anxiety, fear and paralysis. Like it or not, though, uncertainty is the new normal. We live in a time where the world is in a state of constant, long-term flux.

23 Body Language Tricks That Make You Instantly Likeable You send people signals all day, without paying attention to them. The way you move your eyes, the way you shake a hand and so on. There are things you can do to send subconscious signals using body language that make people like you better, or at least give you the benefit of the doubt. Whenever I discuss techniques like these there are always one or two people who feel uncomfortable with ‘influencing’ someone with psychological tricks. Manipulation is not negative Influencing is changing someone’s behavior or mindManipulation is intentionally influencing

20-Year-Old Hunter S. Thompson’s Superb Advice on How to Find Your Purpose and Live a Meaningful Life As a hopeless lover of both letters and famous advice, I was delighted to discover a letter 20-year-old Hunter S. Thompson — gonzo journalism godfather, pundit of media politics, dark philosopher — penned to his friend Hume Logan in 1958. Found in Letters of Note: Correspondence Deserving of a Wider Audience (public library | IndieBound) — the aptly titled, superb collection based on Shaun Usher’s indispensable website of the same name — the letter is an exquisite addition to luminaries’ reflections on the meaning of life, speaking to what it really means to find your purpose.

The Truth About Your Uncertain Life Path & Purpose By Leo Babauta If you’re in your 20s or even 30s, you might feel a lot of uncertainty all the time — you aren’t sure what your life purpose is, or your uncertain about what path you should take in life. This is normal. We all want to know what our driving ambitions should be in life. We all want to have a certain life purpose. 17 Books To Read If You Want To Become A Billionaire Success is magnetic. As a species, we’re constantly studying how it happens, why it happens, who has achieved it for themselves, and how we can obtain it. One thing is for sure: money is an echo of value. Those who bring great products, services, businesses, and ideas into the world are rewarded (at least somewhere along the way) with financial gain. Some of these people even become billionaires. Now, it’s not to say money is everything (it’s not), but having financial freedom certainly makes life more flexible and filled with opportunity.

An Antidote to the Age of Anxiety: Alan Watts on Happiness and How to Live with Presence by Maria Popova Wisdom on overcoming the greatest human frustration from the pioneer of Eastern philosophy in the West. “How we spend our days is, of course, how we spend our lives,” Annie Dillard wrote in her timeless reflection on presence over productivity — a timely antidote to the central anxiety of our productivity-obsessed age.

The beauty of uncertainty Home » Love & Relationships » The beauty of uncertainty We’ve figured out how to control most things in our lives — our bodies, our weight, our work. But relationships? That’s something different altogether. The Quantum Eraser Richard Feynmann noted more than once that complementarity is the central mystery that lies at the heart of quantum theory. Complementarity rules the world of the very small… the quantum world, and surmises that particles and waves are indistinguishable from one other. That they are one and the same. That it is nonsensical to think of something, or even try to visualize that something as an individual “particle” or a “wave.” That the particle/wave/whatever-you-want-to-call-it is in this sort of superposition, where it is neither particle nor wave. It is only the act of trying to measure what it is that disengages the cloaking device and the particle or wave nature is revealed.

What Is Love? Famous Definitions from 400 Years of Literary History by Maria Popova “Love has nothing to do with what you are expecting to get — only with what you are expecting to give — which is everything.” After those collections of notable definitions of art, science, and philosophy, what better way to start a new year than with a selection of poetic definitions of a peculiar phenomenon that is at once more amorphous than art, more single-minded than science, and more philosophical than philosophy itself? Gathered here are some of the most memorable and timeless insights on love, culled from several hundred years of literary history — enjoy.