"The Problem of Increasing Human Energy" by Nikola Tesla 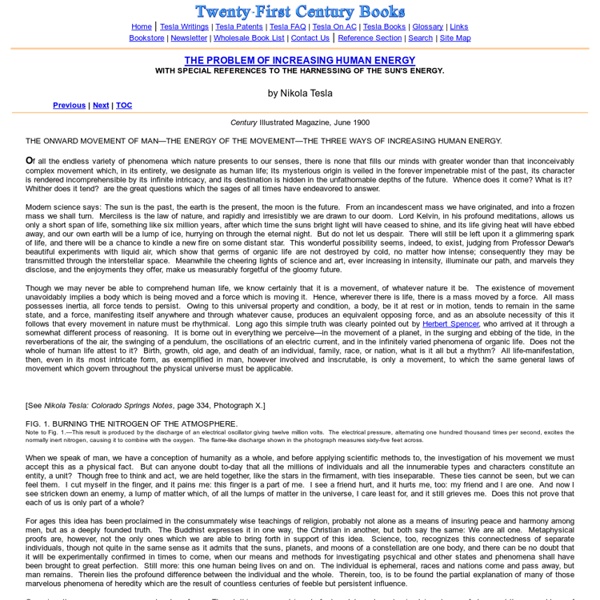 DIAGRAM a. THE THREE WAYS OF INCREASING HUMAN ENERGY. Let, then, in diagram a, M represent the mass of man. This mass is impelled in one direction by a force f, which is resisted by another partly frictional and partly negative force R, acting in a direction exactly opposite, and retarding the movement of the mass. Such an antagonistic force is present in every movement and must be taken into consideration. The difference between these two forces is the effective force which imparts a velocity V to the mass M in the direction of the arrow on the line representing the force f. Viewed generally, there are obviously two ways of increasing the mass of mankind: first, by aiding and maintaining those forces and conditions which tend to increase it; and, second, by opposing and reducing those which tend to diminish it. Conversely, it scarcely need be stated that everything that is against the teachings of religion and the laws of hygiene is tending to decrease the mass. FIG. 2. DIAGRAM b.

"The Transmission of Electrical Energy Without Wires as a Means for Furthering Peace" by Nikola Tesla Electrical World and Engineer, January 7, 1905, pp. 21-24 UNIVERSAL PEACE, assuming it to be in the fullest sense realizable, might not require eons for its accomplishment, however probable this may appear, judging from the imperceptibly slow growth of all great reformatory ideas of the past. Man, as a mass in movement, is inseparable from sluggishness and persistence in his life manifestations, but it does not follow from this that any passing phase, or any permanent state of his existence, must necessarily be attained through a stataclitic process of development. Our accepted estimates of the duration of natural metamorphoses, or changes in general, have been thrown in doubt of late.

The irreconcilable acceptance of near-term extinction by Daniel A. Drumright, a lifelong radical environmentalist who has followed climate science for the last 24 years, and has been a feral “collapse theorist” for the last 12 years Considering this very long essay attempts to address what is without a doubt, the greatest phenomenal event in the recorded history of our species, I will definitely fall quite short in the endeavor.

Selected Tesla Writings A New System of Alternate Current Motors and Transformers, AIEE Address, May 16, 1888 Phenomena of Alternating Currents of Very High Frequency, Electrical World, Feb. 21, 1891 The Tesla Effects With High Frequency and High Potential Currents, Introduction. "How Cosmic Forces Shape Our Destinies" by Nikola Tesla New York American, February 7, 1915 Every living being is an engine geared to the wheelwork of the universe. Though seemingly affected only by its immediate surrounding, the sphere of external influence extends to infinite distance. There is no constellation or nebula, no sun or planet, in all the depths of limitless space, no passing wanderer of the starry heavens, that does not exercise some control over its destiny—not in the vague and delusive sense of astrology, but in the rigid and positive meaning of physical science. More than this can be said. There is no thing endowed with life—from man, who is enslaving the elements, to the humblest creature—in all this world that does not sway it in turn.

by Lawrence Wilson, MD by Dr. Lawrence Wilson Ó April 2016, The Center For Development All information in this article is for educational purposes only. Pure mathematics An illustration of the Banach–Tarski paradox, a famous result in pure mathematics. Although it is proven that it is possible to convert one sphere into two using nothing but cuts and rotations, the transformation involves objects that cannot exist in the physical world. Broadly speaking, pure mathematics is mathematics that studies entirely abstract concepts. This was a recognizable category of mathematical activity from the 19th century onwards,[1] at variance with the trend towards meeting the needs of navigation, astronomy, physics, economics, engineering, and so on. Another view is that pure mathematics is not necessarily applied mathematics: it is possible to study abstract entities with respect to their intrinsic nature, and not be concerned with how they manifest in the real world.[2] Even though the pure and applied viewpoints are distinct philosophical positions, in practice there is much overlap in the activity of pure and applied mathematicians. History[edit]

Manifest Destiny Triforce : Avenge Tesla and His New Electricity - Mislaid Keys to Saving the World This piece explains Tesla's work, an historical context which takes into account secret financial powers having influence on earth and several possible methods for recovering lost treasures. We have found some interesting stuff on New Illuminati in the past and this piece is no exception. Be sure to check them out.There is an effort to suppress real science out there.

Does Anyone Know What Time It Is? G.V. Hudson is to blame It is time for my semi-annual rant and wish that G.V. Hudson had a different hobby. Hudson, a New Zealander, collected insects and was a shift worker. In 1895 he proposed Daylight Savings Time so he could collect insects after work in daylight. Materials science Interdisciplinary field which deals with discovery and design of new materials, primarily of physical and chemical properties of solids The interdisciplinary field of materials science, also commonly termed materials science and engineering, is the design and discovery of new materials, particularly solids. The intellectual origins of materials science stem from the Enlightenment, when researchers began to use analytical thinking from chemistry, physics, and engineering to understand ancient, phenomenological observations in metallurgy and mineralogy.[1][2] Materials science still incorporates elements of physics, chemistry, and engineering. As such, the field was long considered by academic institutions as a sub-field of these related fields. Beginning in the 1940s, materials science began to be more widely recognized as a specific and distinct field of science and engineering, and major technical universities around the world created dedicated schools for its study. History[edit]

The extraterrestrial Messages of Nikola Tesla Tesla believed he received alien messages at the end of the nineteenth century It is not a secret that there are numerous inventions of Tesla that have been attributed to other “inventors”, among these inventions are the radio and the first machine capable of searching for extraterrestrial life. The FBI seized documents including numerous inventions that were way ahead of Teslas time, possible secret technology, including a version of its famous wireless transmitter that could send radio waves focused to distant points of the solar system. While Tesla’s genius is indisputable, some people question whether his mind became delusional at some option. What is true is that Tesla was interested, throughout his life, in developing technology to contact extraterrestrial intelligence and believed that, at least in one occasion, he had detected an alien signal. Since 1896, Tesla believed that a version of his famous wireless transmitter could be used to contact intelligent beings on other planets.