There's More to Life Than Being Happy - Frankl 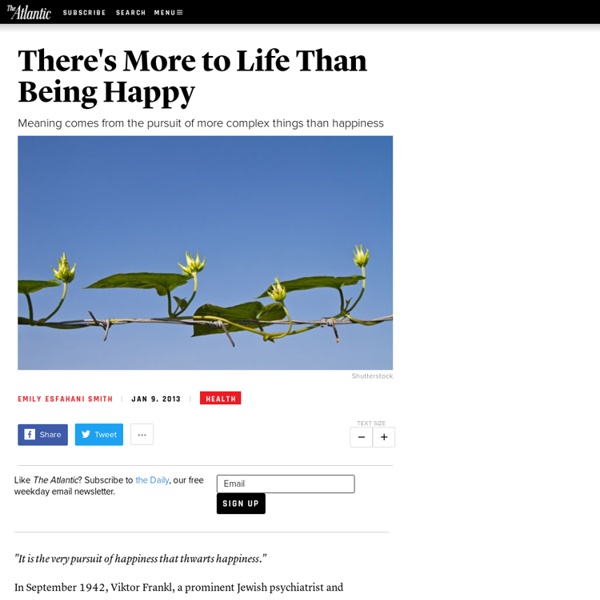 "It is the very pursuit of happiness that thwarts happiness." In September 1942, Viktor Frankl, a prominent Jewish psychiatrist and neurologist in Vienna, was arrested and transported to a Nazi concentration camp with his wife and parents. Three years later, when his camp was liberated, most of his family, including his pregnant wife, had perished -- but he, prisoner number 119104, had lived. In his bestselling 1946 book, Man's Search for Meaning, which he wrote in nine days about his experiences in the camps, Frankl concluded that the difference between those who had lived and those who had died came down to one thing: Meaning, an insight he came to early in life. When he was a high school student, one of his science teachers declared to the class, "Life is nothing more than a combustion process, a process of oxidation." Frankl jumped out of his chair and responded, "Sir, if this is so, then what can be the meaning of life?" Viktor Frankl [Herwig Prammer/Reuters] Peter Andrews/Reuters

Related:  Psychology • On Being Human

Sick of this market-driven world? You should be To be at peace with a troubled world: this is not a reasonable aim. It can be achieved only through a disavowal of what surrounds you. To be at peace with yourself within a troubled world: that, by contrast, is an honourable aspiration. This column is for those who feel at odds with life. Meaning Is Healthier Than Happiness - Emily Esfahani Smith Health People who are happy but have little-to-no sense of meaning in their lives have the same gene expression patterns as people who are enduring chronic adversity. Please consider disabling it for our site, or supporting our work in one of these ways Subscribe Now > For at least the last decade, the happiness craze has been building. In the last three months alone, over 1,000 books on happiness were released on Amazon, including Happy Money, Happy-People-Pills For All, and, for those just starting out, Happiness for Beginners.

The Flip n'Grip™ Wallet by BJ Minson & Dan Loveridge We believe life should be fun, simple and high quality. So we created an, innovative, exciting and fun wallet that makes that happen. Core77: "...the Flip n'Grip wallet lives up to its billing as a clever, playful-yet-practical cardholder. 1 Technique To GUARANTEE You Will NEVER Be Rejected By Women - Attraction Institute I’ve seen quite a few emails from other dating companies recently giving out FOOLPROOF methods for eliminating the possibility of a woman EVER rejecting you. Frankly, they’re all shit. So, to make sure you get the right information rather than some voodoo magic trick to hypnotise women into becoming your dirty sex slaves… …I thought I’d give you the truth about how to avoid rejection from women.

Neurodiversity Rewires Conventional Thinking About Brains Illustration: Mark Weaver In the late 1990s, a sociologist named Judy Singer—who is on the autism spectrum herself—invented a new word to describe conditions like autism, dyslexia, and ADHD: neurodiversity. In a radical stroke, she hoped to shift the focus of discourse about atypical ways of thinking and learning away from the usual litany of deficits, disorders, and impairments.

What Writing Has in Common With Happiness By Heart is a series in which authors share and discuss their all-time favorite passages in literature. See entries from Jonathan Franzen, Amy Tan, Khaled Hosseini, and more. The final line of an enigmatic Jorge Luis Borges poem became the title for Yasmina Reza's latest book, Happy Are the Happy. For Reza, Borges’ poem suggests that happiness, which people tend to talk about as achievable and context-dependent, is dispensed more mysteriously than we like to think. In our conversation for this series, we discussed the ways contentment transcends our understanding—and how works of literature, too, are more than what their authors understand them to be. 20 Motivational Quotes about Life that Lead to True Happiness Don’t you just love an inspiring quote? Quotes are not just interesting tidbits of wisdom and inspiration, but if we really pay attention to the wisdom they have to offer, if we take the time to truly digest it, absorb it and hopefully act upon it, it can actually make a real difference in the experience of our lives. Why not learn from the wisdom of others who have found their paths to “True Happiness?”

The lesson you never got taught in school: How to learn! A paper published in Psychological Science in the Public Interest evaluated ten techniques for improving learning, ranging from mnemonics to highlighting and came to some surprising conclusions. The report is quite a heavy document so I’ve summarised the techniques below based on the conclusions of the report regarding effectiveness of each technique. Be aware that everyone thinks they have their own style of learning (they don't, according to the latest research), and the evidence suggests that just because a technique works or does not work for other people does not necessarily mean it will or won’t work well for you. If you want to know how to revise or learn most effectively you will still want to experiment on yourself a little with each technique before writing any of them off. Elaborative Interrogation (Rating = moderate)

Kierkegaard on Our Greatest Source of Unhappiness by Maria Popova Hope, memory, and how our chronic compulsion to flee from our own lives robs us of living. “How we spend our days is, of course, how we spend our lives,” Annie Dillard memorably wrote in reflecting on why presence matters more than productivity. “On how one orients himself to the moment depends the failure or fruitfulness of it,” Henry Miller asserted in his beautiful meditation on the art of living. 20 Inspirational Quotes of All Time that Can Change Your Life Like many other people, I love motivational and inspirational quotes. They remind me of the important attitudes to develop and maintain for day to day life. Many famous people throughout history like past presidents like Abraham Lincoln, champion athletes like Michael Jordan, business leaders like Steve Jobs, scientists like Albert Einstein, world leaders like Winston Churchill, entertainers like Will Smith and development experts like Steven Covey have given us countless motivational quotes.

Energy Shocks - Quartz Europe is warning Russian president Vladimir Putin of reputational harm if he shuts off the natural gas flow to the West, but judging by the behavior of western oil chiefs, he is secure if he dismisses the admonishment as so much noise. Energy—and not the deployment of incognito, ragtag or straight-out government troops—is the central actor in the drama playing out between Russia, Ukraine and the West. If the West wants to ensure that Putin’s land grab stops at Crimea, it will impose sanctions that impair or halt the activity of foreign oil and gas companies in Russia and ignore his threats to suspend Ukraine’s gas supply. But as long as it is business as usual in Russian energy, look for the Putin crisis to continue. Russia relies on oil and gas exports to support 52% of the state budget. It is no overstatement to say that oil and gas are the lifeblood both of the Russian economy and Putin’s rule.