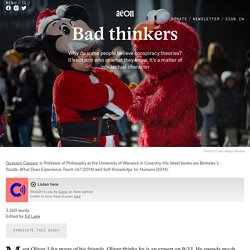 Like many of his friends, Oliver thinks he is an expert on 9/11. He spends much of his spare time looking at conspiracist websites and his research has convinced him that the terrorist attacks on New York and Washington, DC, of 11 September 2001 were an inside job. The aircraft impacts and resulting fires couldn’t have caused the Twin Towers of the World Trade Center to collapse. The only viable explanation, he maintains, is that government agents planted explosives in advance. He realises, of course, that the government blames Al-Qaeda for 9/11 but his predictable response is pure Mandy Rice-Davies: they would say that, wouldn’t they?

Polling evidence suggests that Oliver’s views about 9/11 are by no means unusual. “Personal Kanban”: A Life-Changing Time-Management System That Explodes the Myth of Multitasking. Multitasking is probably the single most overrated skill in modern life. 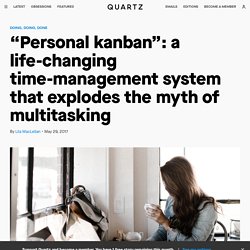 It drains your brain of oxygenated glucose that could be put toward paying more focused attention, makes it difficult for a person to switch between tasks, and is generally an illusion anyway. Only 3% of the population are “supertaskers,” according to a study from Ohio University. To Tell Someone They’re Wrong, First Tell Them They’re Right. The 17th century philosopher Blaise Pascal is perhaps best known for Pascal’s Wager which, in the first formal use of decision theory, argued that believing in God is the most pragmatic decision. 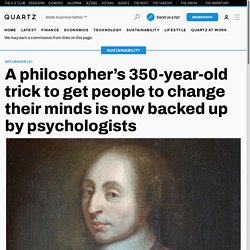 But it seems the French thinker also had a knack for psychology. As Brain Pickings points out, Pascal set out the most effective way to get someone to change their mind, centuries before experimental psychologists began to formally study persuasion: Untitled. Emotions are tied to everything we do. 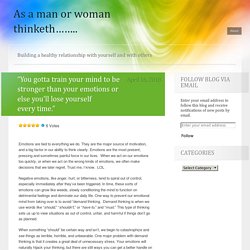 They are the major source of motivation, and a big factor in our ability to think clearly. Emotions are the most present, pressing and sometimes painful force in our lives. When we act on our emotions too quickly, or when we act on the wrong kinds of emotions, we often make decisions that we later regret. RSA Shorts - The Power of Empathy. The Mistake You Make in Every Argument - Liane Davey - Medium. A colleague says something you completely disagree with. 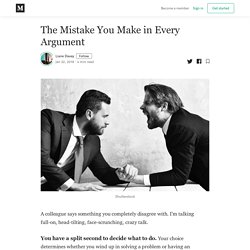 I’m talking full-on, head-tilting, face-scrunching, crazy talk. The Two Minutes It Takes To Read This Will Improve Your Writing Forever – For The Interested. You’re busy, so I’ll keep this quick. 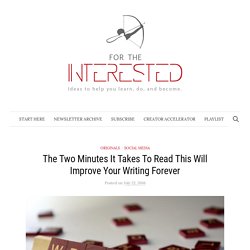 Following are the simplest tips I can give you to easily — and forever — improve the quality of your writing. Delete the word “that.” At least 90% of the times you use the word “that” can be removed from your writing and it will instantly make your sentence stronger. Example: “You believe that I’m lying, but I’m not.” becomes “You believe I’m lying, but I’m not.” Delete the words “I think.” It adds nothing. (509) Taking the Hundred-Year View. 11 Simple Ways to Improve Your Memory. Whether you want to be a Jeopardy! 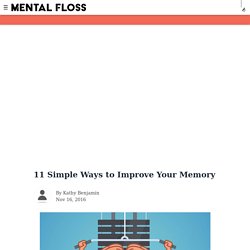 Champion or just need to remember where you parked your car, here are 11 things you can do right now to turn your mind from a sieve into a steel trap. These days we’re all about things being faster. That’s why this advice is invaluable: When you really need to remember something, concentrate on it for at least 8 seconds. That can seem like a long time when you're running around trying to get a million things done, but it is worth it.

Studies have shown that 8 seconds is the minimum amount of time it takes for a piece of information to go from your short-term memory to your long-term memory. A Model of Neutralization Techniques: Deviant Behavior: Vol 40, No 10. Want to Fall in Love With Your Partner Again? Science Says to Ask Them These 36 Questions. Untitled. The Secret Algorithm Behind Learning - Personal Growth - Medium. I wasn’t always a good learner. 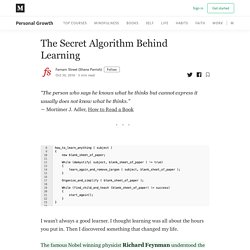 I thought learning was all about the hours you put in. Pocket. Unconscious or Subconscious? A dear friend got caught up in a debate about these terms during a holiday dinner some time ago. 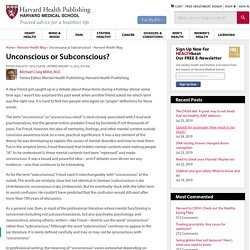 I wasn’t too surprised this past week when another friend asked me which term was the right one. It is hard to find two people who agree on “proper” definitions for these words. The term “unconscious” or “unconscious mind” is most closely associated with Freud and psychoanalysis, but the general notion predates Freud by hundreds if not thousands of years. For Freud, however, the idea of memories, feelings, and other mental content outside conscious awareness took on a new, practical significance. It was a key element of the theory he was developing to explain the causes of mental disorders and how to treat them. The seven moral rules that supposedly unite humanity. If elephants aren’t persons yet, could they be one day? Have you ever stood in a field full of cows? 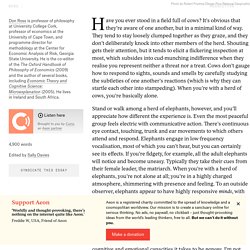 Quote by William Hutchison Murray: “Until one is committed, there is hesitancy, the...” Is everything you think you know about depression wrong? In the 1970s, a truth was accidentally discovered about depression – one that was quickly swept aside, because its implications were too inconvenient, and too explosive.

American psychiatrists had produced a book that would lay out, in detail, all the symptoms of different mental illnesses, so they could be identified and treated in the same way across the United States. It was called the Diagnostic and Statistical Manual. In the latest edition, they laid out nine symptoms that a patient has to show to be diagnosed with depression – like, for example, decreased interest in pleasure or persistent low mood. For a doctor to conclude you were depressed, you had to show five of these symptoms over several weeks.

Why couldn’t the Civil War have been worked out? Some smart people take the question seriously. The Love Books of Ovid: The Art of Love: Book I. Dwindling In Unbelief: Every Jot and Tittle: The 1304 commandments in the Bible. Undefined. Abstract Theories of choice from economics and philosophy suggest information requirements for good choices. In view of these requirements, we can see why current menus lead toward regrettable and isolating choices. We propose principles for redesigning menu systems, and consider the possibility of a public database about choices and outcomes. Reinvent Yourself: The Playboy Interview with Ray Kurzweil. Many think author, inventor and data scientist Ray Kurzweil is a prophet for our digital age. A few say he’s completely nuts. Kurzweil, who heads a team of more than 40 as a director of engineering at Google, believes advances in technology and medicine are pushing us toward what he calls the Singularity, a period of profound cultural and evolutionary change in which computers will outthink the brain and allow people—you, me, the guy with the man-bun ahead of you at Starbucks—to live forever.

Buddhist Principles. Autocracy: Rules for Survival. How a TV Sitcom Triggered the Downfall of Western Civilization. Buddhist Principles. The mindful way through depression: Zindel Segal at TEDxUTSC. Tom Vanderbilt Explains Why We Could Predict Self-Driving Cars, But Not Women in the Workplace. In early 1999, during the halftime of a University of Washington basketball game, a time capsule from 1927 was opened. I read lots of books and articles, but I seem to forget most of what I have learned in them. How can I remember what I learned? - Quora.

The Gray Rock Method of Dealing With Psychopaths — Written by: skylar. The Quantum Eraser. 17 Books To Read If You Want To Become A Billionaire. Success is magnetic. 23 Body Language Tricks That Make You Instantly Likeable. A Message to the People-Pleasers: You are not Helping Anyone. What would you say takes up the vast majority of our time—mental space and energy? How Trigger Warnings Are Hurting Mental Health on Campus. Something strange is happening at America’s colleges and universities. Eclectic excerpts delivered to your email every day from editor Richard Vague. Finally Home — Would you complain because a beautiful sunset... How To Make Your Mind Happy: 5 Secrets To Mindfulness. These 20 Books Are Game Changers, Read Them Before You Turn 30. These images show the naturalness of breastfeeding worldwide. Tony Robbins on his morning routine. What I Learned From Dating Women Who Have Been Raped.

The Shortness of Life: Seneca on Busyness and the Art of Living Wide Rather Than Living Long. The Expose Project. How To Stop Being Lazy And Get More Done - 5 Expert Tips. How to debug your brain. What is true love? Aramaic/Hebrew Words & Names. 13 of the most bizarre lakes in the world. Omgfacts. How to Name a Baby. The Sunk Cost Fallacy. The Truth About Religion in America: The Founders Loathed Superstition and We Were Never a Christian Nation.

Introduction. 9 Ways To Become The Master Of Your Own Mind. There’s a Word for That: 25 Expressions You Should Have in Your Vocabulary. How To Make Your Life Better By Sending Five Simple Emails. Improve Your Life: What 10 Things Should You Do Every Day To Improve Your Life? What are the 6 things that can make you dramatically more persuasive? 7 Must-Read Books on the Art and Science of Happiness. Captive Virgins, Polygamy, Sex Slaves: What Marriage Would Look Like if We Actually Followed the Bible. The invention of the heterosexual - LGBT. How I Overcame Bipolar II (and Saved My Own Life) SebastianMarshall.com: Strategy, Philosophy, Self-Discipline, Science. Victory. Responsibility Expoundathon. Tiny Buddha. Brains of liberals, conservatives structured differently: study - CTV News. Розготерапия - Статья. Proudly Canadian made! Zafus & Zabutons (meditation cushions and mats), buckwheat pillows, meditation benches, yoga supplies, yoga, Ontario, yoga mat, yoga meditation, meditation, walking meditation, meditation benefits, guided meditation, buddhist medita.

Snow Lion Canada. Wired 9.12: Take The AQ Test. Why Lying Broken in a Pile on Your Bedroom Floor is a Good Idea. ~ Julie (JC) Peters. How to Help Someone Who Won’t Help Themselves. Quotes - Let's Talk Sense. Nonviolent Communication: A Language of Compassion - Chapter 1. SolarBeat. Tony Schwartz: The 90-Minute Solution: How Building in Periods of Renewal Can Change Your Work and Your Life (POLL) Tyler Durden’s 8 Rules of Innovation. Mihaly Csikszentmihalyi – Does Creativity Make You Happy? The Multitasking Myth (Ashgate Studies in Human Factors for Flight Operations) (9780754679974): Loukia D. Loukopoulos, R. Key Dismukes, Immanuel Barshi.