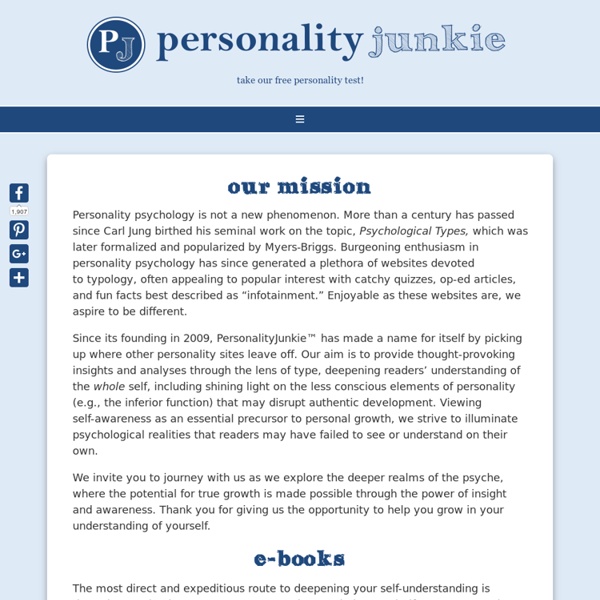 How Will You Measure Your Life? Editor’s Note: When the members of the class of 2010 entered business school, the economy was strong and their post-graduation ambitions could be limitless. Just a few weeks later, the economy went into a tailspin. They’ve spent the past two years recalibrating their worldview and their definition of success. The students seem highly aware of how the world has changed (as the sampling of views in this article shows). Before I published The Innovator’s Dilemma, I got a call from Andrew Grove, then the chairman of Intel. I insisted that I needed 10 more minutes to describe how the process of disruption had worked its way through a very different industry, steel, so that he and his team could understand how disruption worked. When I finished the minimill story, Grove said, “OK, I get it. I’ve thought about that a million times since. That experience had a profound influence on me.

A Little Bit of Personality: Start Here How to Find Your Life Purpose: An Unconventional Approach By Leo Babauta Let’s say you’re feeling unmotivated, unsure of yourself, aimless, can’t find your passion, directionless, not clear on what your purpose in life is. You’re in good company — most people are in the same boat. Now, there about a million things online telling you how to find your passion in life, and that’s a good thing. I’m not going to give you a fool-proof method, or a 5-step method, nor share my passion manifesto with you today. I’m going to give you a one-step method. However, that one step is a doozy. The One Step to Finding Your Purpose It’s simply this: learn to get outside your personal bubble. Your personal bubble is the small world you live in (we all have one), where you are the center of the universe. This is the bubble we all live in most of the time, and people who say they don’t are trying to prove something. When someone tells you you look fat, this only hurts because you’re in your personal bubble. I’m the same way, and so is everyone else.

7 Strange Questions That Help You Find Your Life Purpose One day, when my brother was 18, he waltzed into the living room and proudly announced to my mother and me that one day he was going to be a senator. My mom probably gave him the “That’s nice, dear,” treatment while I’m sure I was distracted by a bowl of Cheerios or something. But for fifteen years, this purpose informed all of my brother’s life decisions: what he studied in school, where he chose to live, who he connected with and even what he did with many of his vacations and weekends. And now, after almost half a lifetime of work later, he’s the chairman of a major political party in his city and the youngest judge in the state. In the next few years, he hopes to run for office for the first time. Don’t get me wrong. Most of us have no clue what we want to do with our lives. Chances are you’re more like me and have no clue what you want to do. Part of the problem is the concept of “life purpose” itself. Here’s the truth. So when people say, “What should I do with my life?” Ah, yes.

5 Profound Insights On Success From A Wharton Prof Devoted To Understanding It If one advances confidently in the direction of his dreams, and endeavors to live the life which he has imagined, he will meet with success unexpected in common hours. --Henry David Thoreau Last summer, Parade magazine and Yahoo! Finance jointly surveyed 26,000 Americans and discovered that nearly 60% of them fully regretted their career choices. That’s an incredibly sad statistic, of course--especially when you consider that job satisfaction has become the most critical factor to a person’s sense of well-being and overall happiness with life. So how is it that so many people have found themselves in careers that leave them feeling empty and unfulfilled? “I think that for a lot of these people,” says Shell, “they hadn’t thoughtfully defined what success would look like in their own terms before pursuing work that aligned more closely with family, social or cultural expectations. Shell speaks from experience. Here’s what I found to be five of the author’s most profound and helpful insights:

The Shortness of Life: Seneca on Busyness and The Art of Living Wide Rather Than Living Long “How we spend our days,” Annie Dillard memorably wrote in her soul-stretching meditation on the life of presence, “is, of course, how we spend our lives.” And yet most of us spend our days in what Kierkegaard believed to be our greatest source of unhappiness — a refusal to recognize that “busy is a decision” and that presence is infinitely more rewarding than productivity. I frequently worry that being productive is the surest way to lull ourselves into a trance of passivity and busyness the greatest distraction from living, as we coast through our lives day after day, showing up for our obligations but being absent from our selves, mistaking the doing for the being. Despite a steadily swelling human life expectancy, these concerns seem more urgent than ever — and yet they are hardly unique to our age. In fact, they go as far back as the record of human experience and endeavor. Seneca writes: It is not that we have a short time to live, but that we waste a lot of it. Thanks, Liz

Purpose Can Not Be Rationalized I felt sick. I wanted to curl up in a ball and be alone. I didn’t want to talk to anyone. I was ashamed. To most people, what I did would seem a trifle, but to me it was much deeper. In my pre-engagement calls, I had a bad feeling about this group. I sat backstage waiting for my time to speak, listening to the executives give their talks to the group. I believe in helping people and doing right by others. I made my choice. I told stories I had heard from my time with the military, stories of heroism and sacrifice. They clapped at the end, but I didn’t stick around. I joined the daily huddle call our little company has where we share what we’re up to for the day and ask for help if we need it. My team was amazing. I remember when I worked in the advertising industry and I asked one of the executives what societal good advertising does? Providing jobs, driving the economy, serving the shareholder are not purposes. P.S.

The 3 Most Important Questions | Mindvalley Editors Note: This presentation has been shared at University of Michigan Business School, Awesomeness Fest, and on stage multiple times by Vishen Lakhiani, and always gets an epic response. Click Play & Enjoy. Over the years I’ve come to stop believing in goal setting. Why? Because goal setting, or at least the way most of us are trained to do it, actually gets us to be obsessed about the how of attaining our goals, rather than the passion, the vision, and the beauty of the goal itself. And this is why so many of us wake up at the age of 40 one day, dreading going to work because we were forced to pick a career before we could legally buy a beer. In this video, we are going to change the way you think about goal setting. This exercise will change the way you plan your life and see your goals.

Our Survival Skills Become Our Talents Martin was a scrawny kid when he was in high school. He wasn’t that tall and he wasn’t that strong. He didn’t excel at any athletic activities and was an average student. But no one laid a finger on Martin. Something deep inside Martin’s brain knew he couldn’t compete on a physical level or academic level so, in order to survive high school, he developed a fantastic sense of humor. I grew up with ADD and thank goodness no one diagnosed it. At an early age I learned to help others. It was because I lacked a natural ability to focus that I learned to spend more time talking about subjects instead of reading about them. As an adult nobody looks at my skills as survival skills, they look at me and say “what a talent you have.” Richard Branson suffered from terrible dyslexia as a boy. The greatest thing any parent or teacher can give a child is the support to solve their own problems. Download a PDF of this post

Self Motivation Quiz (Free) -- How to Motivate Yourself With the right self motivation in mind – you can fly to new heights! Photo by: seanmcgrath The Self Motivation Quiz is all about finding out what makes you tick. What pulls you toward the things you are going for – those top 3 motivating types that make you get going. The more you align yourself with what makes you tick, the more you’ll be magnetized to get there. There are 9 main self motivators that pull you toward your goals. This test is 45 questions and should take less than 5 minutes to complete.

Why Are Hundreds of Harvard Students Studying Ancient Chinese Philosophy? - Christine Gross-Loh Picture a world where human relationships are challenging, narcissism and self-centeredness are on the rise, and there is disagreement on the best way for people to live harmoniously together. It sounds like 21st-century America. But the society that Michael Puett, a tall, 48-year-old bespectacled professor of Chinese history at Harvard University, is describing to more than 700 rapt undergraduates is China, 2,500 years ago. Puett's course Classical Chinese Ethical and Political Theory has become the third most popular course at the university. The only classes with higher enrollment are Intro to Economics and Intro to Computer Science. Why are so many undergraduates spending a semester poring over abstruse Chinese philosophy by scholars who lived thousands of years ago? His students tell me it is true: that Puett uses Chinese philosophy as a way to give undergraduates concrete, counter-intuitive, and even revolutionary ideas, which teach them how to live a better life.

There's More to Life Than Being Happy "It is the very pursuit of happiness that thwarts happiness." In September 1942, Viktor Frankl, a prominent Jewish psychiatrist and neurologist in Vienna, was arrested and transported to a Nazi concentration camp with his wife and parents. Three years later, when his camp was liberated, most of his family, including his pregnant wife, had perished -- but he, prisoner number 119104, had lived. As he saw in the camps, those who found meaning even in the most horrendous circumstances were far more resilient to suffering than those who did not. Frankl worked as a therapist in the camps, and in his book, he gives the example of two suicidal inmates he encountered there. This uniqueness and singleness which distinguishes each individual and gives a meaning to his existence has a bearing on creative work as much as it does on human love. Viktor Frankl [Herwig Prammer/Reuters] This is why some researchers are cautioning against the pursuit of mere happiness. Peter Andrews/Reuters As Anna S.