The Power of Music: Mind Control by Rhythmic Sound 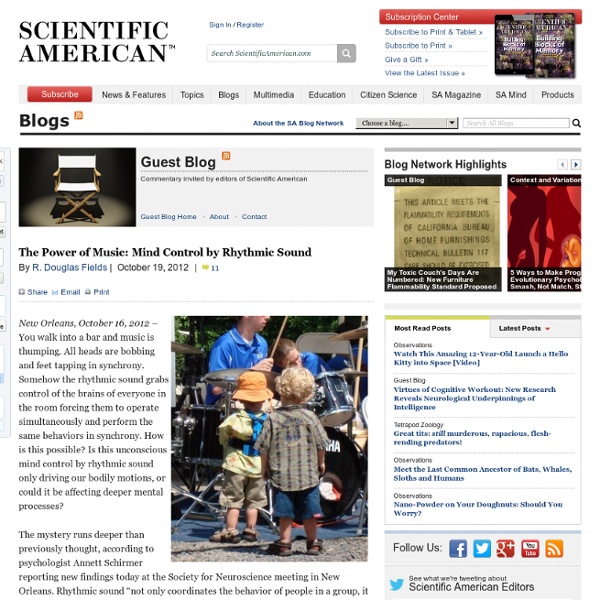 New Orleans, October 16, 2012 – You walk into a bar and music is thumping. All heads are bobbing and feet tapping in synchrony. Somehow the rhythmic sound grabs control of the brains of everyone in the room forcing them to operate simultaneously and perform the same behaviors in synchrony. How is this possible? The mystery runs deeper than previously thought, according to psychologist Annett Schirmer reporting new findings today at the Society for Neuroscience meeting in New Orleans. This finding extends the well-known power of music to tap into brain circuits controlling emotion and movement, to actually control the brain circuitry of sensory perception. Schirmer and her graduate student Nicolas Escoffier from the University of Singapore first tested subjects by flashing a series of images on a video monitor and asked them to quickly identify when an image was flipped upside down. The brain wave recordings also revealed a more surprising effect of rhythmic sound on brain function. Related:  Neuroscience & Consciousness

LAPhil and USC neuroscientists launch 5-year study of music education and child brain development The Los Angeles Philharmonic Association, the USC Brain and Creativity Institute and Heart of Los Angeles (HOLA) are delighted to announce a longitudinal research collaboration to investigate the emotional, social and cognitive effects of musical training on childhood brain development. The five-year research project, Effects of Early Childhood Musical Training on Brain and Cognitive Development, will offer USC researchers an important opportunity to provide new insights and add rigorous data to an emerging discussion about the role of early music engagement in learning and brain function. Starting when the children are between the age of 6 and 7, to ages 11 and 12, the researchers will use standard psychological assessments and advanced brain imaging techniques to track brain, emotional and social development.

Dexter Morgan, Showtime’s serial killer: Could neuroscience save him if he were caught? Photo by -/AFP/Getty Images On Monday, Oct. 22, Future Tense—a partnership of Arizona State University, the New America Foundation, and Slate—will host “My Brain Made Me Do It,” an event examining how neuroscience is affecting the legal system, in Washington, D.C. For more information and to RSVP, visit the New America Foundation website. Katy Waldman is a Slate assistant editor. Follow her on Twitter. Follow It is the moment every Dexter lover fears: Our green-eyed antihero comes home after a tiring day at the blood spatter lab. Even typing this imaginary scene makes my throat tighten. We should start by thumbing through the accused’s profile. Should the legal system get its hooks into Dexter, though, he’d be in serious trouble. U.S. courts once used a test called the M’Naghten Rule to determine criminal insanity. But judges found the Durham Rule too permissive. So what if—as seems likely—the insanity defense failed? Would the fact that Dexter only kills murderers make any difference?

0:02 Inaudible High-Frequency Sounds Affect Brain Activity: Hypersonic Effect Abstract Although it is generally accepted that humans cannot perceive sounds in the frequency range above 20 kHz, the question of whether the existence of such “inaudible” high-frequency components may affect the acoustic perception of audible sounds remains unanswered. In this study, we used noninvasive physiological measurements of brain responses to provide evidence that sounds containing high-frequency components (HFCs) above the audible range significantly affect the brain activity of listeners. We used the gamelan music of Bali, which is extremely rich in HFCs with a nonstationary structure, as a natural sound source, dividing it into two components: an audible low-frequency component (LFC) below 22 kHz and an HFC above 22 kHz. Brain electrical activity and regional cerebral blood flow (rCBF) were measured as markers of neuronal activity while subjects were exposed to sounds with various combinations of LFCs and HFCs. Subjects Sound materials and presentation systems Fig. 1. Fig. 2.

Sex matters: Men recognize cars and women recognize living things best, psychological analysis finds Women are better than men at recognizing living things and men are better than women at recognizing vehicles. That is the unanticipated result of an analysis Vanderbilt psychologists performed on data from a series of visual recognition tasks collected in the process of developing a new standard test for expertise in object recognition. "These results aren't definitive, but they are consistent with the following story," said Gauthier. "Everyone is born with a general ability to recognize objects and the capability to get really good at it. Nearly everyone becomes expert at recognizing faces, because of their importance for social interactions. The results were published online on Aug. 3 in the Vision Research journal in an article titled, "The Vanderbilt Expertise Test Reveals Domain-General and Domain-Specific Sex Effects in Object Recognition." "This isn't the first time that sex differences have been found in perceptual tasks.

Welcome | ICMPC-ESCOM 2012 Ketamine for Depression: The Most Important Advance in Field in 50 Years? In any given year, 7% of adults suffer from major depression, and at least 1 in 10 youth will reckon with the disorder at some point during their teenage years. But about 20% of these cases will not respond to current treatments; for those that do, relief may take weeks to months to come. There is one treatment, however, that works much faster: the anesthetic and “club drug” ketamine. It takes effect within hours. Ketamine doesn’t work the way traditional antidepressants do. Another theory is that depression is caused not by neurotransmitter problems per se, but by damage to brain cells themselves in key regions critical to controlling mood. At first, ketamine seemed to throw a monkey wrench into that neat idea, however. Unfortunately, the hallucinogenic and often outright unpleasant effects of ketamine mean that it can’t be used in the same way typical antidepressants are, and fears about its potential for misuse also hamper its development.

0:00 Binaural beats Binaural beats To experience the binaural beats perception, it is best to listen to this file with headphones on moderate to weak volume – the sound should be easily heard, but not loud. Note that the sound appears to pulsate. Now remove one earphone. The brain produces a phenomenon resulting in low-frequency pulsations in the amplitude and sound localization of a perceived sound when two tones at slightly different frequencies are presented separately, one to each of a subject's ears, using stereo headphones. Binaural beats reportedly influence the brain in more subtle ways through the entrainment of brainwaves[3][8][9] and provide other health benefits such as control over pain.[10][11] Acoustical background[edit] Interaural time differences (ITD) of binaural beats For sound localization, the human auditory system analyses interaural time differences between both ears inside small frequency ranges, called critical bands. History[edit] Unverified claims[edit] Physiology[edit] Overview[edit]

10 Mind-Blowing Theories That Will Change Your Perception of the World Reality is not as obvious and simple as we like to think. Some of the things that we accept as true at face value are notoriously wrong. Scientists and philosophers have made every effort to change our common perceptions of it. The 10 examples below will show you what I mean. 1. Great glaciation is the theory of the final state that our universe is heading toward. 2. Solipsism is a philosophical theory, which asserts that nothing exists but the individual’s consciousness. Don’t you believe me? As a result, which parts of existence can we not doubt? 3. George Berkeley, the father of Idealism, argued that everything exists as an idea in someone’s mind. The idea being that if the stone really only exists in his imagination, he could not have kicked it with his eyes closed. 4. Everybody has heard of Plato. In addition to this stunning statement, Plato, being a monist, said that everything is made of a single substance. 5. 6. Enternalism is the exact opposite of presentism. 7. 8. 9. 10.

Hierarchical Structures in Music Hierarchical Structures in Music The hierarchical structure within music, especially within rhythmic passages and melodic contours, is a well-known phenomenon. For example, in his entertaining and thought-provoking book (with an excellent bibliography), This Is Your Brain On Music , Daniel Levitin says (p. 154) in regards to musical production: Our memory for music involves hierarchical encoding - not all words are equally salient, and not all parts of a musical piece hold equal status. We have certain entry points and exit points that correspond to specific phrases in the music ... In a similar vein, related to musical theory, Steven Pinker summarizes the famous hierarchical theory of Jackendoff and Lerdahl in his fascinating book, How The Mind Works (pp. 532 - 533): Jackendoff and Lerdahl show how melodies are formed by sequences of pitches that are organized in three different ways, all at the same time...The firstrepresentation is a grouping structure. 1. 2. 3. 4. Relation to Language

A Lively Mind: Your Brain On Jane Austen : Shots - Health Blog hide captionMatt Langione, a subject in the study, reads Jane Austen's Mansfield Park. Results from the study suggest that blood flow in the brain differs during leisurely and critical reading activities. L.A. At a recent academic conference, Michigan State University professor Natalie Phillips stole a glance around the room. Phillips, who studies 18th- and 19th-century literature, says the distracted audience made something pop in her head. "I love reading, and I am someone who can actually become so absorbed in a novel that I really think the house could possibly burn down around me and I wouldn't notice," she said. For Phillips, Jane Austen became both a literary and a neuroscientific puzzle. Could modern cognitive theories explain character development in one of Austen's most famous heroines — Pride and Prejudice's Elizabeth Bennett? If neuroscience could inform literature, Phillips asked, could literature inform neuroscience?

Project ARTEMIS Project ARTEMIS was a project undertaken by the United States Navy in the 1960s, which produced a Low Frequency Active Sonar system that could detect submarines at long range. Robert A. Frosch, in his capacity as Technical Director of Hudson Laboratories (Columbia University), was Technical Director of the project.[1] Dr. Frosch later went on to be the 5th administrator of NASA. The project was named in honor of Frederick Vinton Hunt. Ship modifications[edit] A 500-shaft horsepower, controllable-pitch screw propeller was installed in a transverse tunnel through the forefoot of the USNS Mission Capistrano. Active array specifications[edit] The active portion of the Artemis array was 50 ft (15 m) by 33 ft (10 m) and weighed 400 tons. Receive system and monitoring[edit] The passive receive array consisted of ten strings of hydrophones mounted on 200 eighty-foot towers laid down the side of Plantagenet Bank[Note 1] in Bermuda. WikiMiniAtlas Feasibility of permanent installation[edit]